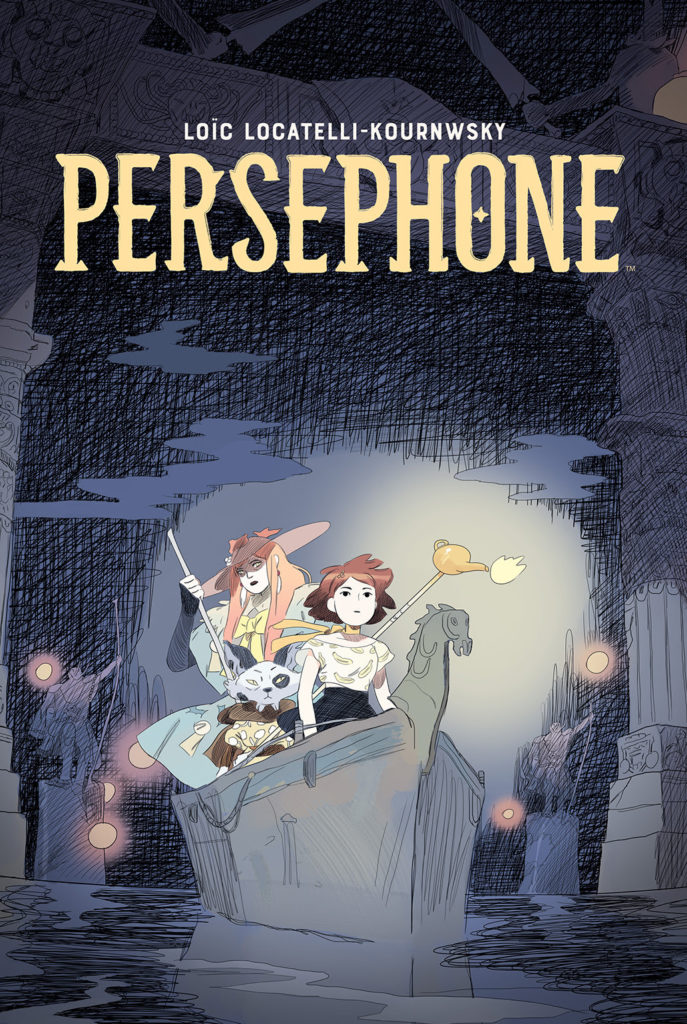 BOOM! Studios is proud to announce PERSEPHONE, Loïc Locatelli-Kournwsky’s moving original graphic novel (OGN) about a young girl whose search for the truth about her identity leads her on a journey deep into the Underworld. Inspired by the Greek myth of Demeter and her daughter, the eponymous Persephone, the book is a modern-day fantasy adventure featuring an emotionally nuanced story and lush art. PERSEPHONE will debut May 2018.

“For a long time I wanted to write a story that speaks to the bond between a mother and daughter, as well as this timeless theme we call ‘the quest for identity.’ This is something really important to me—it was already the main subject of my previous book about Pocahontas, and something I experience in my everyday life as an expatriate,” said Locatelli-Kournwsky, who was born in France but now lives in Japan. “I’ve read Greek mythology stories many times and grew fond of Persephone and Demeter, so I decided to make a book about it.”

In PERSEPHONE, she may be the adopted daughter of the famous magician Demeter, but Persephone struggles to find her place alongside the force of nature that is her mother. Driven by recurring nightmares, she decides to explore the secrets of her birth, which everyone around her seems rather intent on keeping from her. With or without their help, Persephone will embark on an epic adventure deep into the Underworld where she’ll discover who—or what—she is.

For this OGN, Locatelli-Kournwsky drew much of his art inspiration from the works of the famed Hayao Miyazaki. “I am absolutely crazy about Whisper of the Heart and Only Yesterday,” said Locatelli-Kournwsky. “The main characters from these movies were my main inspirations for Persephone. And Demeter is supposed to look like Kate Winslet from her film The Dressmaker, mixed with the Witch of the Waste from Howl’s Moving Castle.”

PERSEPHONE is the latest release from BOOM! Studios’ critically acclaimed Archaia imprint, home to popular series such as Mouse Guard by David Petersen; Rust by Royden Lepp; Bolivar by Sean Rubin; Jane by Aline Brosh McKenna and Ramón Pérez; and licensed titles like Jim Henson’s The Power of the Dark Crystal and Jim Henson’s Labyrinth.

“Loïc caught our attention with his previous graphic novel, Pocahontas: Princess of the New World, so we were immediately drawn to PERSEPHONE and thought it would be a great fit for the Archaia imprint,” said Sierra Hahn, Senior Editor, BOOM! Studios. “With a beautiful mother-daughter story, plus themes of finding your identity and having the courage to persist, and combined with Loïc’s anime-inspired art style, I look forward to readers picking up PERSEPHONE and loving it as much as I do!”

Print copies of the English-language debut of PERSEPHONE will be available for sale May 2018 at local comic book shops (use comicshoplocator.com to find the one nearest you); booksellers including Amazon, Barnes & Noble, and Books-A-Million; or through the BOOM! Studios webstore. Digital copies can be purchased from content providers like comiXology, iBooks, and Google Play, and on the BOOM! Studios app.

For continuing news on PERSEPHONE and more from BOOM! Studios, stay tuned to www.boom-studios.com and follow @boomstudios on Twitter.