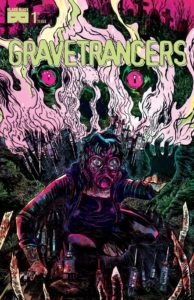 On a journey to track down the grave of their estranged father, Maribel and Anthony find their way to the Malort Cemetery, a strange, seemingly abandoned field of mostly unmarked tombs. There they encounter an eccentric clan of grave-robbers who’ve devised a highly-addictive drug made from human remains–and the fresher the corpse, the stronger the dose. What started out as an attempt to reconnect with the past becomes a descent into a psychedelic, neon-colored nightmare, will Maribel and Anthony find their way through the hallucinogens or will they become the next hit?

Maribel and Anthony Fallon are on a road trip to visit the gravesite of their absentee father, the man who left their family behind when they were both children. For Anthony, who has no real memory of his dad, the trip is a bit of a catharsis, a chance to pay his respects- deserved or no- to the man who had a hand in his conception if not his upbringing. For Maribel, older when their father left, the trip is an unwelcome cruise down memory lane to see the grave of the man who contributed nothing to her life but a bit genetic material and a whole lot of grief. It’s stress she could really live without, being a drug addict who’s a mere 227 days clean and clear, but to support her brother it’s a journey she’ll make… even if she believes in her heart and soul that the effort is wasted.

Arriving late in the evening, the siblings are surprised at the warm and generous welcome received from the Malort family, proprietors of the Memorial Park Cemetery. Greeted by “Mamm” (all of her boys call her that) and her charming son Godfrey, Anthony and Maribel are ushered into the Malorts’ home for some tea before paying their respects. Little do they know that while Mamm busies herself about the kitchen and Godfrey looms in doorways, the rest of Clan Malort is about business of the “morbid and creepifying” variety.

I’m gonna start this review off with fair warning. Gravetrancers is NOT for everyone. If you flinched and cringed your way through any movie produced and/or directed by Rob Zombie or Eli Roth, you might wanna give this one a pass. If your idea of a great horror movie involves a pair of hapless young people being corralled and terrorized by a family of… let’s just call them societal fringers with personal boundary issues… you could be in for a treat.

Are you still here? Okay then, let’s get started…

Mark Miller has concocted a story pulled from a headline he’d read a while back, in which the people running a cemetery were selling plots, burning the bodies and sending them down the drain, and then re-selling the plots. They did this over and over until caught, reaping the profits for their creative grasp of “supply and demand”. From there, he twisted the tale until it took on a form that is, in his words, “something I find truly horrifying”. His narrative starts out recounting cases where the airborne particles of burned human remains caused bizarre visions, hallucinations, and night terrors. Then, because that wasn’t morbid enough, Miller inserts the poor Fallon siblings into his little freak show, and prepares them for the wringer that’s to come. He’s introduced the eerily mute (so far…) “Shovel” Malort, and the presumably unlicensed pharmacist who I believe is the paternal head of this merry clan of corpse aficionados, however has left shrouded in mystery the occupants of what is encouragingly referred to as “The Pit”.

The visual style of Gravetrancers is one that I wasn’t at first sure I was going to be able to get on board with. In the first few pages, there was so much bizarre detail that it was a little tough to make everything out, and the idea of a whole book like that was a little off-putting. Things settled down, though, and I have to say that the eclectic tone laid out by James Michael Whynot, Dee Cunniffe, and Jim Campbell couldn’t be much more perfect. Whynot’s (cuz… why not?) lines are relatively clean and clear, unless they need to be chaotic and frenetic. Believe me, once the story starts to unfold, “chaotic” and “frenetic” are going to be buzzwords. Adding to Whynot’s inks, Cunniffe has splashed colors across the pages of the book that swing from normal to frenzied (another word that’s going to come to mind a lot) in the extreme, to the point that they actually come all the way back around full circle and bump into each other again. The final touch to the visual tone of Gravetrancers is found hidden away in Campbell’s lettering… too few letterers are given their due appreciation (I know I’ve been guilty of overlooking this aspect of comic art myself), but in this case Campbell gives the various characters their “voice”, in the same way that an actor would by inflection and tone.

I don’t feel compelled to attach warnings to many of my reviews. I believe that most people are going to look at a comicbook title with an idea of what they’re getting into long before they ever get around to reading my words. With Gravetrancers, there’s so much disturbing going on, almost sure to find something to truly get under the skin of the most discerning reader, that I think a little extra foreshadowing is in order. Consider the concept of tripping on airborne residue of the cremated dead, and then think on these words from Pappa Malort as he brandishes a hypodermic needle filled with a noxious looking concoction:

“A chip of bone. A pinch of meth. A pound of flesh and one final breath.”

Dream sweet dreams and watch your step. If you fall in The Pit, it’s a trip you’ll regret. 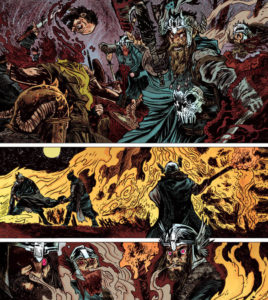 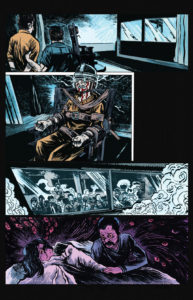