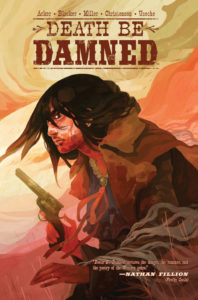 Seven outlaws have killed Miranda Coler and her family, but her death turned out to be a little less permanent than they expected. Blessed with the inability to fully die until she exacts revenge on her family’s killers, but cursed to lose a part of her memories every time she’s ‘killed,’ Miranda will need the help of Joseph Murray, an undertaker dabbling in necromancy hoping to bring back his wife, if she’s ever to find peace. Ben Acker and Ben Blacker (Deadpool Vs. Gambit, The Thrilling Adventure Hour) team up with Hannah Christenson (Jim Henson’s The Storyteller: Dragons, Harrow County) for a supernatural tale of revenge in the Old West, perfect for fans of Pretty Deadly and The Sixth Gun.
———-

Miranda Coler, loving wife and mother, made a life with her family out in the wilderness of the American Frontier. A man with a past, Miranda’s husband James has given up his old ways, going as far as humanly possible from the fringes of the civilization where he’s wanted for the crimes he committed. Some folks just never seem to catch a break, though, and a violent past has a way of catching up and taking its due. Attacked by a group of outlaws, left for dead and forced to bury husband and daughter, Miranda is consumed by a need for revenge that goes far beyond civilized concepts of law and justice.

Death Be Damned is a story that’s got a lot going on. On the surface is your basic revenge yarn, told against the backdrop of the Old West… a setting that’s known more than its share of revenge yarns. There’s something viscerally satisfying in watching the wicked get what’s coming to them, which is generally at the core of these stories. The only evidence we need of that simple fact is found in the success of movies like Death Wish, Payback, & most recently John Wick (chapter 1 or 2, take your pick). Where Death Be Damned starts to pull away from the most basic examples of the revenge story is when the other factors surrounding Miranda’s mission come into play.

She meets Joseph the Undertaker pretty early on, as he’s prepping her body for burial after her second trip to the Other Side. That meeting sets the tone for their relationship as Joseph explains that he’s made himself a student of death, taking philosophical aspects from many cultures in an effort to understand what happens when we die. Using his Zuni mother’s tribal culture as a base, Joseph has accumulated as much information as he can in his attempts to use that knowledge to reach the soul of his departed wife Heather. When Miranda wakes up on his table, Joseph realizes that she could represent a vital tie to the afterlife, and to the return of his lost Heather. What Miranda soon learns is that with every trip into the misty world of the Underneath, she loses pieces of herself as the memories of her family begin to fade.

That’s two characters, each with their own distinct motivations and goals, walking along in the same general direction but with separate destinations. Miranda wants to see her vengeance done so that she can rejoin her family in the afterlife, before their memory disappears completely. Joseph aims to see his wife Heather pulled from the grip of the hereafter and isn’t afraid to cross some pretty profound boundaries to get it done.

The combined efforts of writing team Acker, Blacker, & Miller (kinda sounds like a shyster law firm, doesn’t it?) have concocted a story as unlike your run of the mill payback tale as it is familiar in its questions of purpose and intent. People wonder all the time, “what the hell am I supposed to be doing here?” and within the pages of Death Be Damned we’re given some ideas, not only about purpose but also about what happens when we go against it. Miranda seems pretty sure of herself at first, and it isn’t until she lets Joseph divert her from her single-minded path that the memories of her family start to slip. For his part, Joseph has studied death from as many angles as he can, knows that it’s an inevitable step toward what comes next, but remains determined to pull the soul of his wife back from the brink. Acker, Blacker, & Miller (now I just like saying it…) gave these characters lives, fleshed them out into more than two dimensional stereotypes, and absolutely took no easy outs when it came to telling their story.

The look of the book may take some getting used to for people accustomed to the clean artwork found in most comicbook titles. I have to say that the work of Hannah Christenson as an illustrator couldn’t have been more fitting to the material. It’s rough, it’s anything but pretty, and I thought it represented just how brutal life on the American Frontier could be (side note: I looked at some of Hannah’s other work, and it’s gorgeous). Settlers found no room for pretty things, and likewise that ideal is upheld in the artwork here. From Christenson’s character designs to the color palette laid down by Juan Useche- heavy on the earth tones and red blood splatters- right down to the lettering by Colin Bell, everything about this book supports the notion that if it doesn’t serve a distinct purpose (hey, there’s that word again), it has no place here.

Death Be Damned is a brutal story, all edges and hard knocks, but it delivers a pretty satisfying finish, if not a particularly happy one. For those who like their comics in larger doses, here’s a trade paperback that won’t leave you hanging for thirty days while you wait for the next issue. If you’re looking for a story that features heroine who’s about more than looking good while she’s taking her enemies to task for their crimes, here you go. If you’re interested in a story that takes a look at the afterlife from a different cultural perspective, this is a pretty good piece of speculation. Fans of James O’Barr’s The Crow in particular should find something here to catch their eye and hold their attention.

That’s it. That’s the hard sell, so get thee hence to your local comicbook store (or look it up online, ya lazy bum) and get something with a little more meat and gristle to chew on. 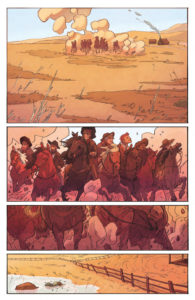 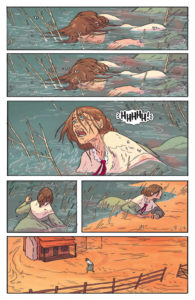 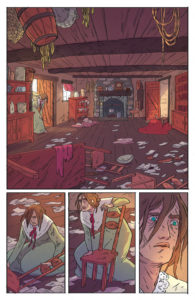 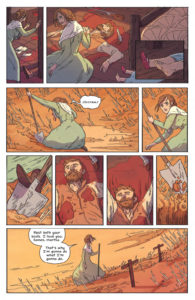 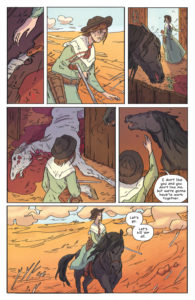 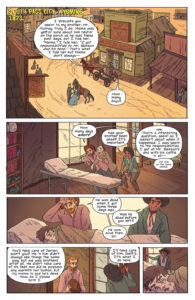 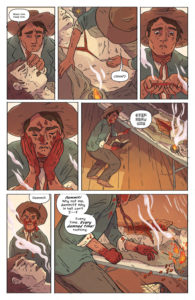 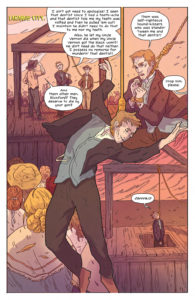 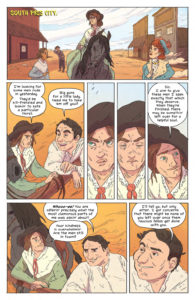 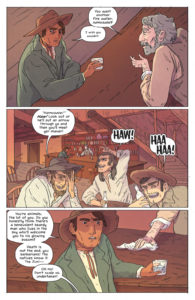