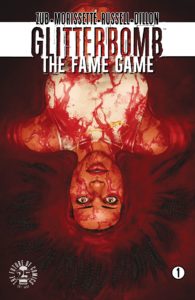 Kaydon Klay wants to be famous. She wants it more than anything else she’s ever known. The dream is hers for the taking, and all she has to do is embrace the national tragedy that’s put her in the spotlight… Fan-favorite writer JIM ZUB (WAYWARD, Uncanny Avengers) and artist DJIBRIL MORISSETTE-PHAN (All-New Wolverine, Ultimates) continue their twisted exploration of fame and failure. The entertainment industry feeds on our insecurities, desires, and fears. You can’t toy with those kinds of primal emotions without them biting back.
———-

The biggest names in Hollywood, forty members of the celebrity elite, have been murdered live on national television. The killer, Farrah Durante, was herself a celebrity whose star was waning. Now Kaydon Klay, her “close friend”… okay, her babysitter… finds herself in the spotlight as the last person to speak to Farrah before the slaughter. At first, Kay is uneasy with the media attention, shocked by the events that have pushed her reluctantly to the forefront. That reluctance starts to fade as people start lining up to speak to her, everyone vying for her attention and telling her what a big deal she must be. Even police Detective Isaac Rahal wants to talk to Kay, but it has nothing to do with anything as petty as her five minutes of fame. Detective Rahal knows something about Farrah Durante, about events leading up to her mass murder of Hollywood’s finest, and he’s determined to get to the bottom of it all.

Glitterbomb is a story with more layers than a parfait. Maybe not quite as many as an onion. Or an ogre. It’s just got a lot going on. There’s an underlying commentary on the dangers of fame, of its addictive nature, and how easy it is to fall under its spell. In our everyday lives, we’re bombarded with stories of celebrities falling into ruin despite/because of their best efforts, clinging to their status with every conceivable effort. Along comes Glitterbomb to give us a “what if” story about fame that digs a little deeper, into the inconceivable. Fame has a darker side, and Glitterbomb looks to take that dark side and drag it hissing and clawing out of the realm of the metaphorical.

Where the first mini-series explored the depths a celebrity might drop to in order to regain a taste of glory days gone by, this second arc dips into what happens when someone formerly on the fringe of fame is pulled from the background and into the public eye. Jim Zub has taken the concept of fame- fleeting, fickle, and ruthless fame- and turns it into a creeping tale of horror that erupts into brutal violence without much by way of warning. It’s a fine line he’s walking, but so far he seems to be doing just fine. His characters are given unique and believable motivations, with no one coming across as a throwaway or “filler” player. Everyone serves a purpose, imbued with personality and depth no matter how short their appearance in the story might be. It wouldn’t surprise me if this issue’s cabbie, taking up space in a whopping three panels, has a detailed backstory of his… at least in Jim Zub’s mind.

Horror is a tricky genre to pull off in comic form. When you go to a horror movie, it’s all of the non-visual cues that really drive home the tone, with creepy background noises and musical scores. There’s none of that in a comic book, so it’s up to the artistic team to make up for that lack. Djibril Morissette-Phan & K. Michael Russell have taken up that challenge and nailed it to the wall with a bloody railroad spike. Right about the time you’ve forgotten that Glitterbomb is a horror story, lulled into a false sense of security and safety by the seemingly mundane activities on the page, they crack you in the skull with a splash page of imagery that carries impressions akin to the prickling feeling up your spine when you know something bad is about to happen. Not content to just hint at the horrors to come, these guys will throw in a sequence that’s as “in your face” as it gets.

More than just a series of shocking jolts you might get from the common slasher flick, Glitterbomb: the Fame Game is bringing a more subtle kind of horror to the table. It’s subtle, like a warm damp hand brushing the back of your neck, with sudden eruptions of vicious savagery that had me do a double take.

Fans of stories like Gail Simone’s Clean Room will want to take a look into this title. From the first arc to this one, it looks like the team is just getting warmed up.