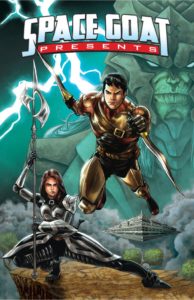 Seven stories from the comic-industry’s most established and up-and-coming talent. Unleashed! Big Game Hunters, The Family Secrets, and Doorkickers start here. You’ll want to keep this hardcover volume on a shelf near you so you can read it over and over again.
———-

Fans of the anthology book, this is a pretty low profile book from a company established in 2006 by Shon Bury. From what I’ve seen so far, they handle any and all genres in the comic book medium, for all ages and tastes (check out the review for Moonlighters for some aimed at the younger set). Just between the covers of this volume of Space Goat Presents we’re given superheroes, ancient warriors, special ops versus the forces of darkness, and a freaking Kung Fu werewolf! Check it out:

Daryan Adan, the immortal Man-at-Arms (but not the He-Man dude… totally different Man-at-Arms), is all that stands between the demonic forces of the Aramak Abomination and the Temple of Alandra. If he can’t hold the line, these forces of darkness will swarm over the sacred place and have access to the Crossroads of the Gods. Can this eternal warrior stand against the tide, or will he meet a dark fate?

Action from start to finish, this vignette by Shon Bury and Zid is a fast-paced short with apocalyptic ramifications. Everything worked for me, and had me interested in finding out more about the character of Daryan Adan. Seriously, who isn’t a sucker for an immortal warrior doomed to a dark fate?

In a trek through the mountains of Tibet, young Irish-Tibetan-American Tenzing O’Reilly is searching for somewhere he can belong. The ultimate goal of his expedition is the lost city of L’un D’un (totally different from K’un-L’un), but the party is intercepted by a pack of huge, disturbingly human-looking wolves, and everyone but Tenzing is killed. Grievously wounded, Tenzing makes his way painfully across the frozen landscape, and miraculously finds his way to the lost city he’d been searching for. Taken in by the monks and nursed back to health, the young man begins his training in their martial arts and believes he may have found his place in the world. After a year, however, Tenzing isn’t able to shake the feeling that something is wrong with him. Periodically, oddly enough about once a month, he wakes up in strange places, and has no memory of how he might’ve gotten there. Finally, he strikes out once again, leving L’un D’un behind to continue his search for inner peace.

I’m not gonna lie, I love this whole concept, and I’m doubly digging on the fact that it’s a joint collaboration between writer and artist. Come on, people, I shouldn’t have to spell it out for you or work too hard to sell this one. It’s a friggin’ Kung Fu werewolf! I liked the set up as writer Darren Vincenzo establishes Tenzing as a young man without a solid handle on his past, heading out into the world and finally finding his place through tragic circumstances. Sure, he almost died a horrible death, but then he became an ass-kicking monk who turns into a gigantic furry mass of claws and teeth… who knows Kung Fu!

Preteen would-be superheroes Carolina and Bailey have cut class- totally Carolina’s idea- to see if they can make a difference out in the world. Having inherited superpowers from their mother, who is trying to make ends meet as a psychic private investigator, the kids are find their chance when they run across a volatile hostage situation. A lunatic with a gun, a group of innocents, two inexperienced by enthusiastic heroes, and an over-protective mother sets the scene and delivers both action and emotion.

One of those stories that works on a couple different levels, I thought this was one of the better parts of the anthology. Justin Peniston delivers a thoughtful bit of insight into the mind of a super-powered family that has it anything but easy. The artistic team of Eder Messias, DYM, and Daniele Rudoni wrap it all up in a dynamically rendered package, without overshadowing the character-driven work established by Peniston.

A story told from the split narrative of two different perspectives during a debriefing, Doorkickers is about a covert military operation gone sideways. On the one hand, you’ve got an elite squad of anti-terrorist operators, highly skilled and the best at what they do, and on the other a top secret unit dedicated to defending humanity against the things that go bump in the night. As the debriefing reveals the events of the compromise op, it becomes clear that the adage “no plan survives first contact with the enemy” is more than just pretty words.

Being a short story, with no real lead in or build up before diving into the action, as well as being told from two different points of view, this one was a little tough to follow. That said, I really wanted to follow it. I still want to follow it. The writing team of Scott McCullough and Shon Bury (boy, that guy’s name comes up a lot in here) have created an awesome pairing of SEAL Team 6 and the BPRD. The action is quick and chaotic, as you might expect in a full blown gun fight, and the characters were interesting and got me curious to know more about them (pretty much the job of an anthology book). The art by Douglas Franchin and Michele Nucera more than did the job of conveying a special forces unit running headlong into demonic forces from beyond the Veil.

In short, while I may have only recently discovered the work being put out by Space Goat Productions, LLC, it’s a publisher I really want to see more of. Thankfully, there’s a pretty good sampling of their titles available through ComiXology’s Unlimited program, so it’s easy to get hold of a variety of their books. I’d encourage anyone to do so, to support an independent comic book publisher who’s obviously willing to take a few creative chances and stretch themselves, and is by all appearances determined to put out some damn good work. 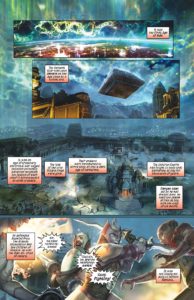 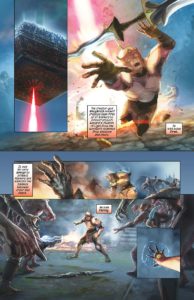 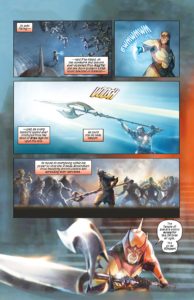