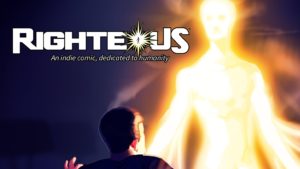 Righteous is a webcomic that is being offered for the first time in print form. The original idea for Righteous came from asking the question, “What would happen if everyone suddenly woke up, committed to helping others?”

The story centers around Daniel Price, a risk manager who’s just been given the account of a lifetime: squeeze the most profit out of a new car manufacturing deal for one of the nation’s top car makers. It doesn’t matter that the lives of future drivers should only be taken into consideration if it affects the bottom line.

One night, Daniel is visited by an unknown being of light who transforms him from motivated capitalist into an agent of altruism. With his way of life threatened by his own actions, Daniel tries everything he can to hold on to the life he built. But will it be enough?
———-

I got a blurb in my email about this title, and wanted to put it out there. Now, keeping in mind that the Kickstarter campaign is closed and the book fully funded, there’s still quite a bit going on out there. I’ll be including links to the Kickstarter page as well as the title’s regular webpage, so anyone interested can take a good look at what this book is all about. I’m just gonna say it… we can’t turn on the television without being bombarded by all the horrible things that are happening out there. I’m not saying that these aren’t important events and that we should turn a blind eye (“The Only Thing Necessary for the Triumph of Evil is that Good Men Do Nothing.”), but once in a while it’s nice to find something that puts the emphasis on the positive. And believe it or not, kids, there are still good things and good people out there… they just get overshadowed by the fact that the bad stuff makes better headlines.

Hop over, take a look, and maybe you’ll find something of interest in Righteous, the title that asks the question: “What would happen if everyone suddenly woke up, committed to helping others?”