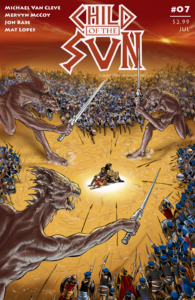 Child of the Sun is a very loose adaptation of the biblical Samson mixed with some other biblical tales, biblical legends, and ancient biblical fiction. The story focuses on the first half of Samson’s life: before Delilah, before the fall, when his power and confidence was at its height. It is also a love story between Samson and the little known wife of his youth.
———-

Michael Van Cleve’s epic story, mixing mythologies and theologies, comes to a close in this final issue. Samson, champion of the Hebrew God, has stood against the Philistines as they marched across the known world, led by the warrior Apophis. Where at one time Samson would have fought side by side with his old friend and legendary brother from another pantheon, Heracles, he’s alone as the final battle comes to a head. In his path to victory are three giants, the last surviving Nephalim who’ve been summoned by the Philistines to fight their battle for them. The terms they’ve offered him are either A) serve them as a worshipper, or B) serve them as an appetizer (“get in mah belly!”). It’s irresistible force crashing against three immovable objects, and if Samson survives he’s still got Apophis and his army to overcome.

Would somebody PLEASE hand this man a jawbone!

When I was given the first issue of Michael Van Cleve’s seven issue labor of love, I thought it was pretty ambitious. The combination of Roman mythology and Biblical scripture has to be the penultimate crossover event, sure to intrigue and offend a few. When you think about it, though, it’s a crossover that makes some sense. In Greek myth, Heracles (not Hercules… changing the name is how the Romans avoided copyright infringement) is the son of Zeus and the mortal woman Alcmene, and a warrior of divine strength. The Hebrews had their own champion of God-given strength, the mighty Samson. When the two met, way back in the first issue released in September of 2015, it was a much younger, less jaded Samson who approached the boisterous Heracles. Over the course of the series, the two parted ways and met again a few times, with each meeting serving to highlight the differences between the two. Where Samson maintained his faith and his sense of honor, the mighty Heracles fell deeper into his life of wine, women, and song. By the seventh installment, Samson and Heracles have parted ways, maybe for the last time, over their shared weakness… the love of a woman.

Reading through the series again, I discovered that it was a much easier read as one single story. With the stretches of time between individual issues, I’d lost track of parts of the story. Van Cleve would move things along in one issue, and then in the next he’d flashback to show events leading up to the previous installment, making me wonder if I’d suffered some kind of head trauma induced memory loss. Taking each issue singly as it was released, it could get pretty easy to lose one’s place. Going through the series as a whole, as a “Big Picture” style of story, it all came together and was much easier to process. For some, that might sound like a problem. Given the scope of this story that qualifies for the descriptor “epic”, it’s the larger story that counts. Hopefully, with the entire series released and the potential for a single edition trade on the horizon, Child of the Sun can get some recognition and attention. Michael Van Cleve’s ambition in tackling this level of creative license, encompassing multiple, and dare I say polarizing, myths and creeds, is deserving of some notice.

Another piece of the puzzle that should earn Child of the Sun some respect is in the artwork. While the series featured the work of multiple artists, it was bookended by the art of Mervyn McCoy in issues 1 & 7 (with the assist by Jon Bass on the latter). Where some of the other featured artist’s had their strengths and unique styles, McCoy’s work is in my opinion crisper, cleaner and more dynamic… which works out well in the final issue as it’s pretty much a cover to cover throwdown. He did a great job of showing enough of the battle between Samson and the Philistine army to convey the chaos and violence, without clogging the page with too much information. Also, I have to say that his designs on the three giants (Nephilim brothers Belaus, Marduk, & Kingu) did a great job of showing the complete and total depravity of the seemingly omnipotent monstrosities.

However you wind up tackling this series, in single issue installments, or in a bingefest of mythic proportions, Child of the Sun should get some love and respect out of fans of epic stories. It’s got it all: action, betrayal, unrequited love, and people-eating giants. What else do you need? 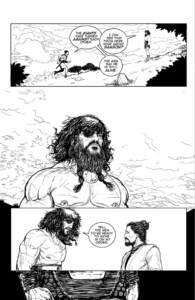 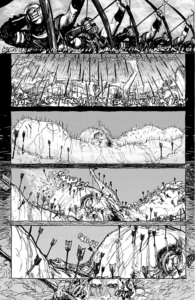 And some full color pages, coming soon in the collected edition… 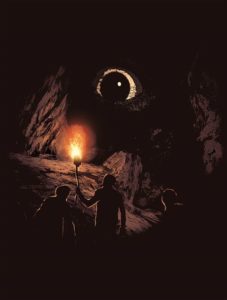 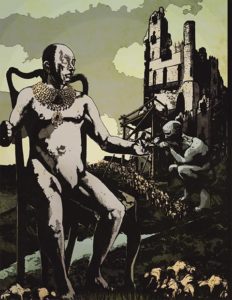 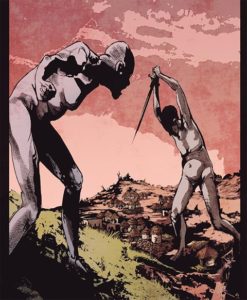 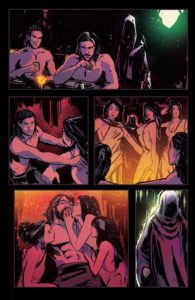