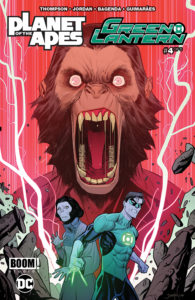 The origin of the Universal Ring revealed! Battle of the Red and Green Lanterns on the Planet of the Apes! As Cornelius’ corruption manipulates the mutants into an army of ring bearers, Hal Jordan and Zira will do all they can to save him before it’s too late.
———-

The Universal Ring has found its way into the hands of the unassuming Doctor Cornelius, an ape of compassion and reason. However, as the Ring’s power gains power, it holds greater influence over Cornelius’s emotions and fans the flames to send the Doctor spiraling faster along the path of conquest. Meanwhile, other Lanterns have begun to feel the effects, as their own Rings are drained of their power by the siphoning effect of the Universal Ring. Now even the likes of Hal Jordan, Guy Gardner, the mighty Kilowog, and Sinestro are left without the power of their respective Lanterns, having found themselves in the middle of a power struggle on this strange planet that looks a lot like ours… except for its inhabitants.

They’ve found themselves trapped on a Planet of the Apes.

Holy nostalgic overload! Hal Jordan, Green Lantern of Earth’s sector of space, has found himself in a bit of a pickle. Trapped on world that may or may not be a future version of our own, he’s joined with Zira, wife of Doctor Cornelius, and Nova, a primitive human woman native to this Earth. They’re on the move, trying to intercept Cornelius before the Universal Ring can do too much damage. When they come across the unconscious forms of Jordan’s fellow Green Lanterns, a group that includes Guy Gardner and Kilowog, it’s discovered that the Red Lanterns have entered the race.

As if the whole situation wasn’t complicated enough, Jordan is dumbfounded to discover that Gorilla Grodd is now involved, having been brought to this “planet of apes” with the hope that he’d be able to help communicate with the local populace. Now Grodd is on the loose, adding a double dose of unpredictability to the already volatile mix. All this, and we can’t forget that Sinestro is still in play, working to his own ends… which can’t exactly bode well for anyone.

With many crossover events of this kind, the biggest problem is in- of all things- believability. If there really isn’t a workable reason for the characters and their worlds to interact, the story falls apart. I’d like to say that Boom! Studios and DC Comics have avoided that particular pitfall in the case of “Planet of the Apes/Green Lantern”. I’d like to be able to say that the concept holds up, that the characters are kept true to form, and that the whole thing comes together into a very entertaining package.

So that’s what I’m gonna say. Robbie Thompson’s story, written by Justin Jordan and outstandingly rendered by Barnaby Bagenda & Ales Guimaraes, hits every note a fan of either or both properties (which I have been for more years than I’d like to admit to) could hope for. It presents a pretty feasible reason for the crossover, with the multiple Lanterns racing to gain control of the Universal Ring… a ring that isn’t restricted to any one color of the spectrum, but is powered by them all. The artwork is great, handling the very different character styles, between the costumed superheroes/villains and the utilitarian apes in their various species.

Keep in mind, these apes are from the old school movies from the sixties and seventies that I remember watching as a kid. Their world just seems a little dustier, more desolate and hazardous, as every faction of ape has its own ideas of how their world should be run and the pesky humans should be dealt with. In my opinion, this holds up as the best version of the setting. It doesn’t rely on CGI or the twists and turns of Tim Burton’s mind. It was a world that was a direct result of our own greedy struggle for power, a factor that lent a bit more gravity to the story than even Mark Wahlberg’s performance could overcome.

The addition of the Green Lanterns, their angrier counterparts the Reds, and the force of nature that has always been Sinestro doesn’t feel like a stretch. Of course the Lanterns’ power would stretch across boundaries of space and time. They do it all the time. What made this story a little more interesting to me was when Hal Jordan, arguably the greatest Lantern to ever wear a Ring, finds himself stranded on a world ruled by human-fearing apes, and wearing a Ring that’s been totally drained of power. Now he’s stuck firmly on the ground, relying on the speed of a horse to get himself back into the fight- a fight in which he will be, by all appearances, completely outmatched.

If you’ve been looking past this mini-series for fear of yet another pointless crossover, you really might be missing out on something awesome. I say “might” because you could be one of those very few people who would have no interest at all in either Apes or Lanterns. But in that case, I can’t really figure why you’d be following a blog dedicated to everything both of these properties represent.

Now, how ’bout a few covers and some preview art? 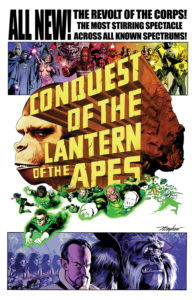 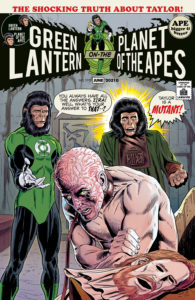 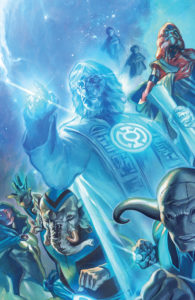 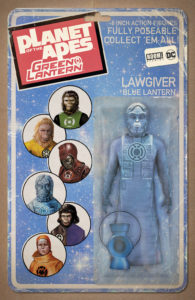 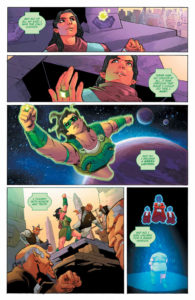 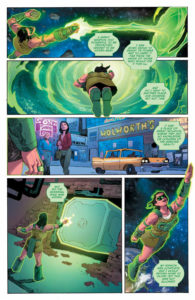 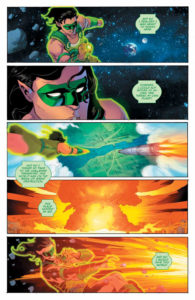 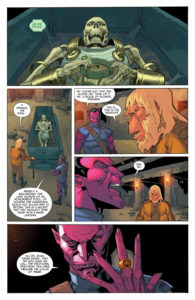 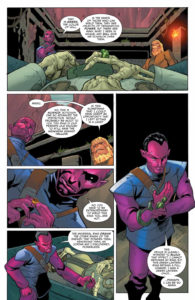