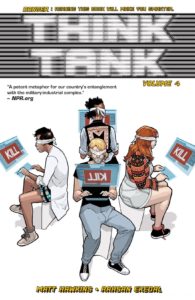 Doctor David Loren, prodigal genius employed by the government (much to his chagrin), continues his work on the TALOS project, fixated on bringing “Iron Man” suits to life against a Californian backdrop. Add this to increasing tension in his relationship with Mirra, and things are about to get messy.

When the United States’ technical infrastructure takes a hit, Doctor Loren and his team must step up to the plate to stop anything worse from happening in both his personal and professional lives. Soon the attacks spread to countries all around the world, forcing David to work on a larger scale than ever… perhaps to the detriment of his own mental health.

From Matt Hawkins (The Tithe, Symmetry) and Rahsan Ekedal (Echoes, The Tithe), this fourth volume of the hit science-fiction series takes science fact to the a global level and examines the internal repercussions.
———-

David Loren, recruited by the government at the ripe old age of 14 to work for DARPA, is pretty much always the smartest guy in the room. Over the course of Think Tank’s first three story arcs, he’s proven it again and again. Too difficult for his government handlers to control, but too valuable to be eliminated, David’s head has gotten pretty big. Sure, to some degree his ego has been earned, as he’s pretty much come out on top in most every regard. He’s manipulated the people who were supposed to be manipulating him, he’s “gotten the girl” in the personage of love interest Mirra Sway, and he’s able to get pretty much anything he wants from the higher ups… so long as he continues to produce.

None of this is to say that there hasn’t been a cost to go with David’s successes. The work he’s done for DARPA over the years has resulted in hundreds of deaths, many of them he’s witnessed firsthand, and David holds himself responsible for every one of them. He’s sworn that he won’t work on weapons anymore, and has put his full attention into the TALOS Project- real life exoskeleton suits of armor that will protect US soldiers in the field. Saving lives. Still, the damage has been done and David finds himself caught in the middle of a taffy pulling contest… The powers that be in Northlock Industries, the corporation that holds the contract for development of TALOS, are doing their best to dig into David a little deeper. His girlfriend Mirra is a CIA field operative, and the two often go weeks without seeing each other. David’s best friend, Dr. Manish Pavi, has been around since the two met in Cal Tech, but Manish is happily married and seems to be ready to move forward while David continues marching in place. For the first time, the ever arrogant, always confident Dr. David Loren has begun to feel the weight of his actions, and he’s not at all sure what to do with that.

Matt Hawkins and Rahsan Ekedal have done something outstanding with this series. They’ve taken a step into a medium that usually sees people in colorful costumes flying through the sky and tossing lightning bolts at each other. This is a story about people, governments, and corporations, doing what they all do in the real world every day. And the true genius of the story is that they snuck it in on us. The first three story arcs were pretty much all fun and light-hearted shenanigans. Think “Real Genius” but with better tech. With “Creative Destruction”, they’ve taken the story and its characters into a darker and much more serious area that touches on very real, and for some I’m sure, personal issues.

Thanks to Hawkins’s love of research and Ekedal’s outstandingly created world, Think Tank is also way more realistic than some people might know, or want to know. Most of what they’ve shown in the series is out there, folks, to some extent or another. Ponder that. Everything that you think you know about the wonders of modern technology, and you can be pretty sure that the government, ours or someone else’s, has something that’s three steps ahead of that. If it weren’t for things like budget constraints, we’d probably see giant mechs and walkers right out of Star Wars stomping across the screen on our nightly newscasts.

Now think about the people who come up with that stuff. Super geniuses that you see in movies and on television (hey, I’m a huge fan of The Big Bang Theory too) are generally pretty well adjusted people, right? Now ask yourself, “how is that possible?” Consider, for one quick second, the worst thing that you know as a fact. Now imagine if you didn’t just “know”, but you KNEW it, down to the most minute level. Everything about it; the math, the how, why, where, when, and who, right down the molecular level. Think about being a teenager with that level of knowledge, and then try to picture yourself being snapped up by a government that wants to use and ultimately weaponize what you know, all before you were old enough to legally drink. How the hell do you deal with that and not be a total mess?

The core of Think Tank is that David Loren is, in fact, a mess. From balls to bone, the guy is absolutely wrecked and he’s only just starting to figure it out. Hawkins and Ekedal have taken their golden boy genius, the hero of his own inner monologues and winner of countless real world chess matches on a global stage, and they’ve introduced him to the extreme consequences of what he knows and what he’s done. Matt Hawkins has gone the extra mile and shared with David the very real world pain of chronic depression (definitely not to be confused with situational depression), taking the time to explain to the reader every stage of a disorder that worms its way into your subconscious and gnaws at you piece by piece, when you think you’re doing just fine. The fact that Hawkins and Ekedal have taken all of these steps to ensure that their hero is every bit as fragile and broken as the rest of us elevates Think Tank to the MUST READ category.

I can’t spell it any more clearly. Think Tank is the thinking person’s comic book. With sharp writing and believable characters doing unbelievable things and with the science to back every one of them up, this is the comic to read when you’re tired of intergalactic heralds signaling the doom of entire planets.

Hell, we can do that just fine all on our own… 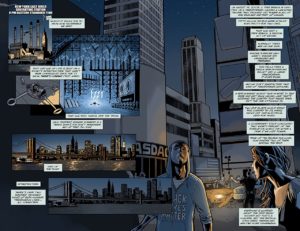 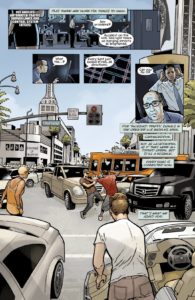 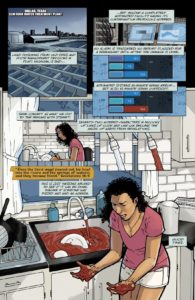