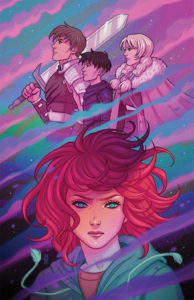 Lark’s Killer follows Lark who is a runaway living rough on the streets of LA, when suddenly she’s transported to an alien world of swords, dragons and magic, where everyone wants her dead. And, she likely won’t live long enough to find out why.

Lark’s Killer is written by Bill Willingham (Fables) with interior art by Mark Dos Santos. Lark’s Killer #1 will at your LCS August 2, 2017!
———-

Come, oh stalwart reader, and join us on a journey to a time and place lost to the ages. It was a time of high adventure, of courageous heroes, and of daring deeds waiting to be done; an age of monsters, lurking in dank lairs, gathering their strength before they strike out against a helpless populace; a time when brave warriors and clever rogues risked life and limb for the sake of treasures untold. Such a group of could-be-heroes were the Frogbarding Siblings, brother and sister born to a warrior’s lineage, and their stealthy companion Septavian, the Seventh Son, also known as “Seven” (because it’s easier to pronounce).

This group has fought their way through a bloodthirsty horde to reach a fabled trove of treasure waiting to be discovered by the stout of heart. Through tunnel and cave, they’ve fought and slain, until finally, reaching the center of the deadly labyrinth, they find…

No, not David Bowie… nice try, though. (Moment of silence)

What the Frogbardings and their friend Seven find is, indeed, the treasure they were looking for, but not the treasure they were expecting. As the greatest treasure to be had is immortality, and true immortality comes from the telling of great deeds, this trove may prove to be worth more than a dragon’s weight in mere gold. A smallish dragon. We’re not talking Smaug-sized or anything. Maybe not even Pete’s Dragon™. Most definitely a Lockheed (any X-Men fans out there?) or maybe two. Whatever, this dragon is a teller of tales, a narrator of courageous deeds, a…

Okay, enough of all that. I’m sure everyone get’s the picture, so let’s move this along.

The Frogbarding Siblings are treated to a tale of their ancestor, the mighty warrior Brenar Frogbarding who lived 100 years before. More specifically, and more relevant to the above mentioned comic book, they- and we- are introduced to Lark. Born “Kelsey Anne Patchlark”, Lark is a runaway who finds herself mysteriously transported from our world to Mercy Rock in the Kingdom of Vess. The last thing Lark knew, she was running from a store clerk who had caught her shoplifting. Now, she finds herself running from a group of rough looking characters after her head. With no idea of where she is, or why anyone there would want to kill her, Lark will have to adapt, to find a friend or two, and perhaps have an adventure or two that could be worth the telling.

The creative team of Bill Willingham, Mark Dos Santos, and Salvatore Aiala have put together a world that may be rendered a little more brightly than would be expected, given the whole “deadly horde” and “off with her head” theme. Then again, there’s no shortage of dark fantasy stories out there, so I’m more than happy to give something with a little more cheeky humor a go.

Willingham has invested his characters with a wry sense of themselves, with even the “evil henchmen” cracking wise and coming across as a little more likeable than would be expected. I mean, times are tough, man… if a guy can make an extra buck on the side, who are we to judge? In Lark, we’re given a quick introduction to a young girl who’s fast on her feet and quick thinking. Finding herself in a strange place, completely out of her element, she still manages to latch onto the key to survival when faced with greater numbers and overwhelming odds- Get. Help.

The artistic style of Lark’s Killer reminded me a lot of the animation of some of the old Disney cartoons. It is bright and cheery, not at all dim and grimy, and to be honest it works for me. Mark Dos Santos’s characters are distinct, with details that are at first a little off the mark for the subject matter, while still oddly fitting. Example: one of the henchmen chasing Lark- at first glance, I totally saw a caricature of Keanu Reeves as Ted “Theodore” Logan. When I looked again, the anachronistic surfer dude came into focus and fit into the setting of the story, but that initial impression gave him more personality, at least in my mind, than any of his dialogue. When he spoke, I absolutely heard “Whoa” in his voice.

Colored by Salvatore Aiala, the world of Lark’s Killer completely belies the grim title of the book. As mentioned, the whole thing looks like it could be a Disney production. The bright tone adds to the tongue in cheek story, taking the emphasis off of the fact that people are out to kill Lark. Sure, there’s danger and violence being done, but it’s okay cuz it all looks so happy and chipper, so how bad can it be? What’ll be interesting to see is if future issues can maintain the balance, if Willingham’s potentially darker narrative (Lark is a runaway and presumably running from something… also one of the henchmen was covered in blood) can still walk the line and not overwhelm Aiala’s colors.

My first impression of Lark’s Killer in its inaugural issue is that it could be a blast to read. The action takes more of a backseat to the story, giving us looks at the aftermath of the battles instead of putting us in the middle of it. The reader can pay more attention to the characters and their dialogue, but still get the idea that death and/or dismemberment are on the table in abundance.

Fans of darker fantasy might be put off by the tone of the book, but anyone just looking for some escapist fun should give it a try. 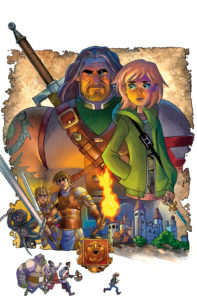 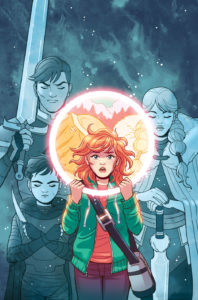 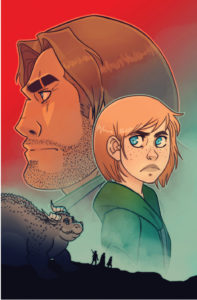