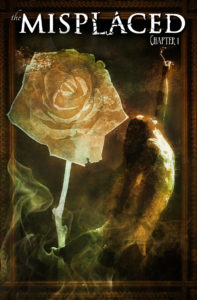 In the aftermath of a horrific tragedy, a young man pushes through the afterlife searching for the soul of his lost bride.
———-

James and Anna were newlyweds, on their way to a new life in the New World. Somewhere in the middle of the ocean, their ship went down and all aboard were lost. James awoke to find himself in what should have been Paradise, where all of his wants could be fulfilled, but what he wants most is the one thing that’s missing… Anna. Without her by his side in the afterlife, the idea of eternal bliss is hollow and false. With that in mind, James goes against the grain and sets out to find Anna.

In the spirit of such stories as What Dreams May Come and The Crow, Chris Callahan has crafted a tale of tragedy and determination. When James sets out on his journey to be reunited with Anna, he finds that not everyone in Paradise is happy with his decision. He’s told that the Balance must be maintained, but he feels that there isn’t any balance without Anna, his other half. What’s more, James starts to discover that Anna’s disappearance could be just one instance in a growing conspiracy, not just a case of a single lost soul.

With the themes going on under the surface of his book, Callahan has put together something approaching literature. The story touches on Gothic Romance, as James starts out on his quest to be reunited with his bride. There are the obvious supernatural tones as we explore the surreal landscape of Heaven, artfully rendered by Callahan. Finally, with hints at something deeper and more sinister going on, the disappearance of Anna’s soul could be just a single incident in a problem that could literally shake the pillars of Heaven.

Coming up on the end of an already successful Kickstarter campaign, The Misplaced is a story that’s truly deserving of the tag “graphic novel”, and I’m saying that as a guy who doesn’t have a problem with admitting that he still reads comic books. Chris Callahan has put together a narrative that stays with its darker tones of tragedy and loss, and manages moments of levity to give the reader a chance to breathe and process. He presents the romance of James giving up his place in Paradise so that he can find his true love, but doesn’t make it too heavy and cloying. Despite its high concept, The Misplaced was a surprisingly easy read. And the good news is that instead of being released in its original four issue format, this Kicstarter program is pulling the trigger and putting it out in a single volume. With a story this deeply layered and high concept, that’s a good thing. I don’t think it would have worked as well in shorter single issue releases.

Take a look at the Kickstarter page and see if any of the contributor rewards appeal to you. If you’re looking for a book that asks some pretty serious questions, and poses a few answers about the true nature of Paradise that might not have occurred to you, The Misplaced is a book that’s worth a look. 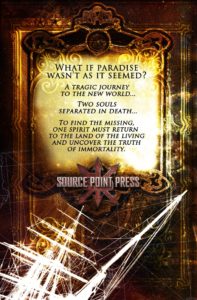 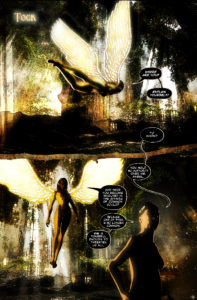 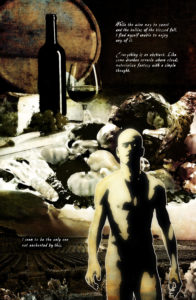 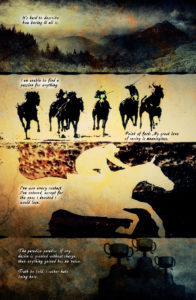 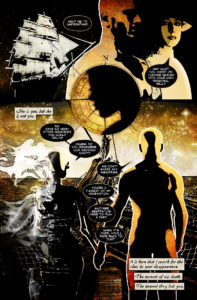 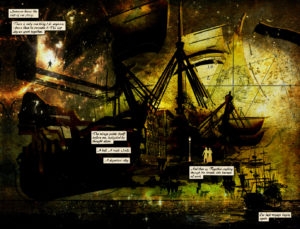