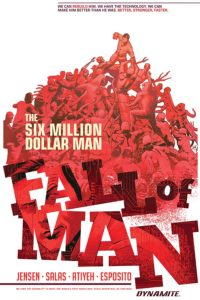 Amid this deeply trouble world, Steve Austin- the legendary Six Million Dollar Man- is America’s best hope in its fight against innumerable enemies. When Steve discovers disturbing secrets in OSI’s past, he uses his cybernetic upgrades to rebel against the agency… but he’ll face plenty of threats…

I just want to open this post up with an apology to Dynamite, to Van Jensen, and Ron Salas, and to Colonel Steve Austin. It took me far too long to get to this book, but I read it and now I’m stuck with the moral imperative to talk to you about it. If it helps, based on the source material, and the fact that this series isn’t by any means new (hence the trade paperback collected edition), let’s just call this a “Throwback Thursday” post and move on. Good?

As an operative for the Office of Scientific Intelligence (OSI), Colonel Steve Austin has taken on one dangerous mission after another. He’s been repaired and rebuilt over and again, better than he was before. Better. Stronger. Faster. But over time, Steve’s started to feel like every piece of him that is replaced is one bit of his humanity that he’ll never be able to get back… And now he’s hearing a voice in his head, whispering advice along with more profanity than would ever have been allowed on network TV in the 70’s. Is he losing his mind? Have his cybernetics begun to meld in with his organics more completely than even OSI’s best and brightest could have anticipated?

The Fall of Man storyline is a great piece of nostalgic action that captures the feel of one of my all-time favorite shows from the 70’s, but instead of adhering to that tone and attitude completely, writer Van Jensen has kicked this story up to 11. Steve Austin is a man questioning his own place in the world, and growing more and more determined to find a way back to his humanity. More than a matter of replacement limbs, his cybernetic enhancements have begun to intrude on his thoughts. Is he still the man he used to be, or is he just an amalgam of parts running along a path he has no control over?

Steve’s introspective dilemmas come to a head when he discovers some pretty damning evidence hidden away in Oscar Goldman’s office. Long before the crash that almost killed him, many test subjects were used to perfect the cybernetics that saved Steve’s life. While he was the first to survive the process, he’s horrified to find that he was nowhere near the last. Discovered documents reveal that Goldman had full knowledge of OSI’s ultimate plan to perfect the technology through Steve, and use it to create an army of cybernetic soldiers to fight in the wars to come. Now Steve Austin, no longer content to be OSI’s guinea pig, is a man on the run, with all of the resources of OSI on his heels. Over the course of the story, he finds himself face to face with the more advanced and mentally unstable Barney Hiller (“The 7 Million Dollar Man”, season 2, episode 5), the mysterious “N3TWORK”, and revenge seeking ninjas.

Throughout all of this chaos and anarchy, Van Jensen is able to keep pace with the story, never letting it slip totally out of his control. His narrative is tightly bound up in a framework of equal parts nostalgic tribute and well-thought out speculation on where the story could have gone after the TV show ended. He moves his characters through one situation after another, each building on top of the last to raise the stakes higher than the limits of 70’s television could have ever dreamed of. What’s more, at every step, Steve Austin holds onto his primary motivation, to regain his humanity any way he can. Joining the fight are technology magnate Mick Gentle as a 70’s Elon Musk, and bio-engineering badass Dr. Holly Green. Opposing Steve in his quest are the aforementioned Barney Hiller and oh so mysterious N3TWORK, along with aggressive and ambitious OSI operative Agent Sampson.

Ron Salas has a pretty major role to play as the artist for this series. Starting out with the recognizable features of the steely eyed Lee Majors (Steve Austin in the show), he’s crafted his character designs without slavishly trying for a photorealistic approach. I think one of the downfalls to many comics that are based on TV and movies is that they spend too much effort trying to resemble actors and actresses. It results in something that just looks like they’ve pasted stock photos into their work, shoehorning a bunch of celebrity stills into the story. None of that is the case here. Salas’s work flows from panel to panel, and when the action starts, it’s just one small step away from cinematic. If they wanted to craft a motion picture revival of this series, a studio wouldn’t have to look any farther than this book for their storyboards.

In particular, one whole chapter of the book, a full issue of the story’s original monthly release, was an extended and masterfully crafted action scene. Chapter 3, “The Train”, takes place in one long, smoothly paced panel that was spread out over multiple pages. It followed Steve in a running fight along the top of a moving train as he’s trying to reach the engine car. While all of that was going on up top, Steve’s ally Holly Green keeps pace with him from inside the cars, fighting her own battle against OSI agents determined to stop them both. I kid you not, I think I went back over that chapter three times, and every time I thought I could hear the “nananananana” sound effect of Steve’s bionics as he fought with the “better, stronger, faster” Barney (an evilly insane cyborg named “Barney”? What were they thinking?).

This collected trade edition is an outstanding introduction to a legendary character who paved the way for science fiction television at a time when most studios were trying to come up with the next prime time soap opera. It’s also a great look back for existing fans, old farts like me, and gives them a peek at what might have come after the series ended. All of it set against the backdrop of the late 70’s, with amazing advancements like the Atari 2600, and historical reminders of a Berlin still divided by East and West.

You shouldn’t need a cyborg brain to realize that I liked this book, and am giving it an enthusiastic robot thumbs up! 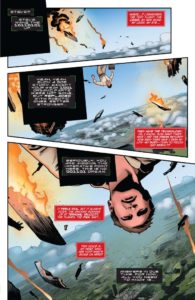 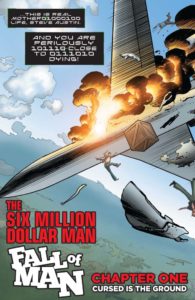 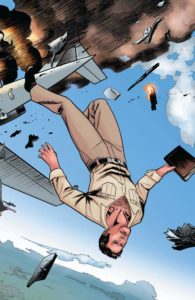 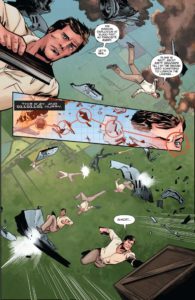 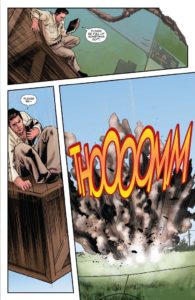 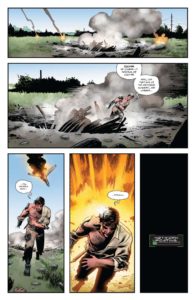 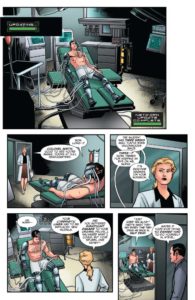 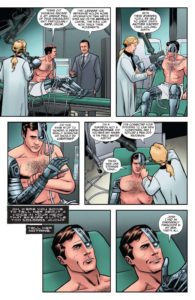 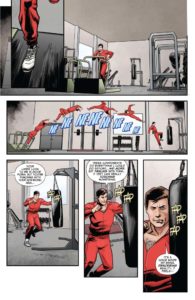 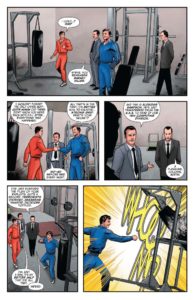 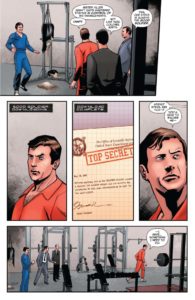