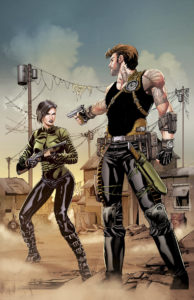 In 2033 less than 1% of the population survived a devastating pandemic virus. Half of those who lived were immune while half of the survivors mutated into something disturbingly subhuman.

Now decades later, the world has rebuilt in many ways but has become something else entirely. Strongholds of human survivors have been set up independently of one another across parts of what is formerly the United States. The rich live in highly guarded Utopias where technology and even an economy has been restored.

However, the vast “wasteland” between strongholds is a very dangerous and unforgiving place where the poor are forced to live in areas where gangs, pirates and the mutated roam free.

Couriers are key to the survival of the Strongholds and are paid handsomely to deliver valuables between them.

Eve Harper is one of the best couriers there is, but when she takes a job to find a missing shipment for an extremely dangerous drug dealer named Gillings, Eve is forced to use every trick she’s ever learned in order to survive the riskiest job of her life.
———-

Life after the plague of 2041 is tough. With most of humanity gathered behind the relatively secure walls of scattered communities, the rest of the landscape is a series of hazards, each more dangerous and unpredictable than the last. Gangs of raiders and scavengers roam the stretches in between strongholds, waiting to take what they can from travelers crazy enough to try getting from one city to another. Mutated monstrosities known as Primals are even less predictable and that much more frightening in that their attacks are based on hunger instead of greed.

Traveling back and forth, delivering goods and services when and where needed, is the job of the Couriers. These are the few people prepared and willing to regularly brave the dangerous no-man’s-lands outside of the walled cities and secured compounds. Eve Harper is one of the best, but her most recent job hasn’t gone particularly well. Running medical supplies from her home city in Sector 7 (formerly known as “Charlotte, NC”) to the Augusta Compound, she tore up a tire and had to stop for some quick repairs. Then she was attacked by a pack of Primals, managing to kill several of the reptilian looking brutes, but taking an injury herself before escaping. Then arriving at the Augusta Compound, she discovers that the situation there is less than stable.

The medical supplies are for Colvin, leader of a raider gang called The Specters, who was shot in a deal gone wrong. Colvin’s chemically impaired and brother Jansen, who is coincidentally the reason said deal went wrong, is in charge of the gang while his big brother is laid up. That means that the girlfriend of easily manipulated drug addict Jansen is running the show. She’s got her own ideas of how things should be and girlfriend to the gang’s second in command ain’t one of ‘em.

Zenescope is taking a bit of a step away from their normal “fairy tale gone wrong” formula, and after reading the first two issues it seems like that’s a good thing. Courier Eve Harper comes across as a solid character with some good potential for growth that doesn’t hinge on excessively revealing clothing- midriff baring biker leathers notwithstanding. She comes across as a bit of an adrenaline junkie who doesn’t like sitting around between jobs, and has no issues with putting her competition in place when they get lippy. Tedesco’s done a good job of introducing a new character into the expanding Zenescope world with some good scripting and plotting.

Speaking of that world… I like the work done by the team of Miranda (pencils and inks) and Valenza (on colors). They’ve got multiple environments to work with as the action goes from secured city, to desolate wastes, to remote compound, and they handle the shifts well. Miranda’s character designs are good, but it looks like blondes were more susceptible to the catastrophic virus that decimated the world’s population (or Valenza just doesn’t like them)… lotta brunettes walking around. The action moves very well, with some prime opportunities to make with the post-apocalyptic violence that did not disappoint.

We’re two issues in, and this new series is off to a pretty good start, each ending on a serial style cliffhanger. I’m a little bit sad that this is set to be a five issue limited run, but maybe if the interest is there, Eve can keep on driving. All things being equal, I like the change from Zenescope’s normal fare. Granted, the post-apocalyptic action story is an easy mark to swing for these days, between The Walking Dead and the resurgence of Mad Max. It’s still a break from the familiar, unless Tedesco manages to tie The Courier into some kind of bizarre Billy Goat’s Gruff story.

(preview pages are from the first issue, available now…) 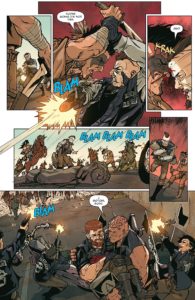 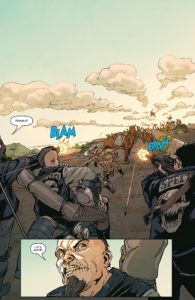 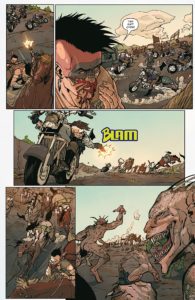