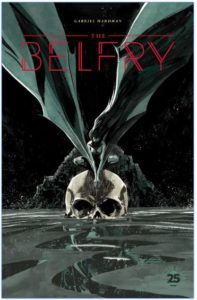 I’m not a fan of most horror movies. They’re often violent for the shock value and no other reason. Each new horror movie strives to be more shocking than the last, meaning monsters more grotesque, more blood, more shocking ways to dismember the human body and spirit. But I love horror comics. Horror comics can be just as cinematic and terrifying as any movie, but mainly because they lack the actual gore and violent movemnent that causes the mind to fill in the blanks. As we know, the mind is the most terrifying cinema that humans can produce. The Belfry is a great example of this.

It opens on a plane crash, with loud noises and screams and spooky darkness enough to set a proper horror mood. Bill, our protagonist, is one of two pilots on this flight, and he can’t understand how the plane came down safely; he was unconscious and the senior pilot seems to have had his vision…er…obstructed. It turns out that the crew and passengers on this flight weren’t so much crashed as abducted. Thus, the horror begins.

In one issue, Hardman has told a complete noir horror story in the span of a normal-sized comic that leaves you on the edge throughout, told in grey tones with a few pale colors thrown in. It doesn’t break new ground – the story gets to a predictable end in an interesting way – but the whole package of visual and prose storytelling is arresting in a way that old garage-sale horror comics from the 70’s would scare me as a kid.  The dark, jagged panels and sudden bursts of sound effects just amped up the anxiety in the way that old black-and-white monster movies did. 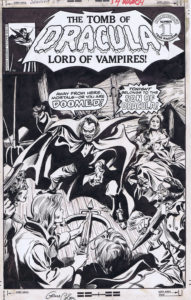 Following the story, he discusses his influences, and as soon as he mentioned Gene Colan‘s pencils on Tomb of Dracula, I knew I’d found my horror happy place. Well done. 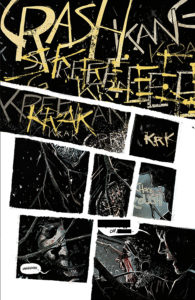 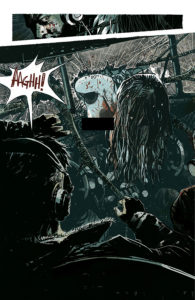 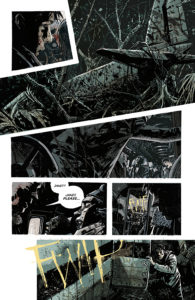 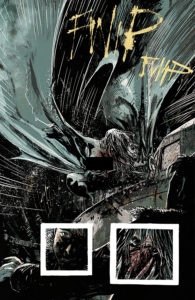