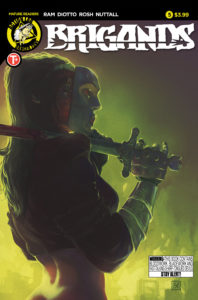 Pulled from death row and recruited by the secretive inquisition to steal an artifact called The Myros Pendulum, Stilian Desault now paired with an old colleague, Veina must put together a group of Brigands for the heist of their lives. But there are no happy endings or quick deaths for battle-forged blades. Stilian will soon discover that things are about to go very wrong.

The final issue of the hit mini is HERE!The sky is blood red as the Myros Comet comes ever close to the port-city of Cartaduan. Half of our heroes are trapped, and the others powerless to save them. New allegiances will be forged, and scores will be settled. War is on the horizon, and a reckoning is at hand. One last time into the fray, Brigands!
———-

Stilian “the Blackheart” Desault has been hired to steal the Myros Pendulum, an artifact tied to the approach of a legendary comet. Okay, maybe “hired” is a little off the mark, but when you’re offered a handful of blank pardons for crimes against the realm in exchange for services rendered, no one likes to quibble over fine print. Especially if turning down the job means an immediate trip to the headman’s block. However you want to look at it, Desault is on the job, impossible mission or no, and he’s set about assembling his team. But in all legendary tasks there are bound to be stumbling blocks along the way.

Davoran, a former prisoner who led an uprising to take control of the prison, has a bone to pick with Desault. A man of ambition, Davoran had concocted a plan with both short and long term goals. In the short term, the goal was to not be a prisoner anymore. Check. For the long term, his plan was to hold onto the prison in the guise of its warden, accepting payroll and supplies until he and his merry men could release themselves upon their own recognizance and live with a bit of style. As in all well-laid plans, there are many a slip ‘twixt the cup and the lip… Enter Stilian Blackheart, as great a force for entropy and chaos as has ever walked on two legs. Now Davoran believes he’s owed something for his troubles and he’s taken two of Stilian’s people prisoner, to be held until he receives gold to make up for what his broken schemes could have earned.

To get them out and continue with his mission, Stilian Desault will have to rely on every bit of tactical genius he possesses, along with a bit of luck and cracker jack timing… with no guarantee of a cool toy surprise at the end.

It’s probably not a coincidence that Brigands has been put to print now, with a growing interest in villains being pressed into service as good guys. Action Lab’s Danger Zone, the label embracing their more adult oriented titles, has taken the path blazed by such giants as The Dirty Dozen, Ocean’s 11, and more recently the Suicide Squad, and spun the concept into a gritty fantasy setting. With a group of characters that includes a brute, an assassin, a thief, and a war criminal, we’re given another great opportunity to root for the bad guys.

Issue number 5 in the series brings the opening act of the Brigands storyline to a close. Events in the world are moving along and gaining speed, and the likelihood that they’ll be working against Desault and company seems pretty high. It’s these peripheral events that make the story more interesting, giving the reader a look at a bigger picture than a group of ne’er-do-wells on a suicidal mission. With some really solid writing from Ram V, this title is elevated to something pretty damn cool. The characters are given a breath of life, complete with very believable frustration and uncertainty, which makes for interesting reading. While the main characters are all criminals and vagabonds, they still show depth as we get glimpses beneath the layers. For example, Griz the brute is motivated by his desire to be the master of his own destiny as much as by the prospect of a pardon. His whole life has been spent as little more than a dangerous pawn, put to use in the service of other men. Now he’s given a chance to start over, free to take control of his life and to steer himself in the direction of his choosing. It’ll be interesting to see if the other characters are given the opportunity to peel back the layers and show some nobility… It’s a concept that plays great against the politicians and noblemen who’ve set the story in motion to satisfy their own ambitions.

Huh, the contrast of the titular “Brigands” played as having the true strength of character that highborn heads of state seem to lack… a timeless concept that never seems to get old.

If you haven’t jumped on board with this title yet, here’s your chance as the first story arc comes to a close. The team has been formed and the mission is underway… Bring on the mayhem! 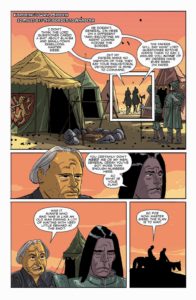 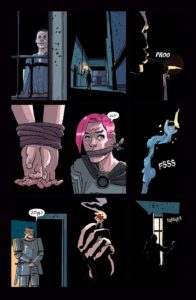 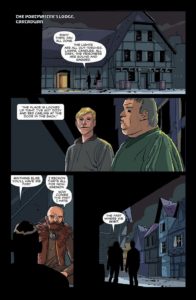 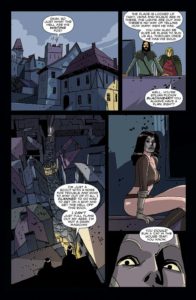 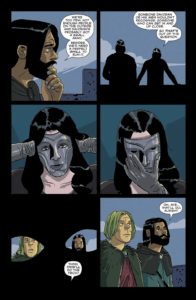