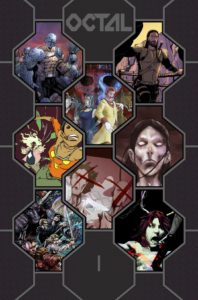 Octal is a curated catalog of comic pitch packets. With each pitch packet built around an 8-page pilot, Octal functions as a comic anthology while providing first looks at potential upcoming comic books/series and bringing a bit of transparency to the comic pitching process.
———-

When you think about it, this really is kind of a brilliant idea. Octal is given out free to distributors, publishers, and editors… pretty much anyone who might be on the prowl for a new title. It’s also sold to readers, giving them a taste of some fresh new books that could be coming down the pipe. Creators get the chance to show some of their work, and if they do get a green light there’s already some interest in their title(s).

So what’ve we got here in the first volume? I’m glad you asked. Octal volume 1 contains 8 comic book shorts, designed to serve as an introduction to the title being pitched. Here’s what we’ve got

Tag Line: After a hapless divorcee is mistakenly given necromantic powers, he must get his own life in order before he can master the powers of death.

Set in a present day middle class California suburb, this one gave me the chuckles. Mild-mannered Bill, accompanied by his raven familiar Larry, sets about trying to figure out his new found powers. This isn’t as easy as most comic books might make it look, because Bill may hold the power of death in his hands, but he has trouble standing up to the guy who sold him a broken record player.

Tag Line: When a group of contract criminals sign on for the biggest job of their careers, they soon unearth disturbing facts which indicate that there may be more to their client’s agenda than they thought.

A violent and loosely drawn tale of criminals right out of a Tarantino movie, this is the story of a group of ambitious criminals of various backgrounds getting in way over their head. In this short intro, Hyman is working a job that’s a little too much for one person to handle, so he calls in his cousin to lend a hand for a cut of the take. Cue whacky criminal hijinks…

Tag Line: The finger of suspicion falls upon an eccentric detective when his prime suspects in a case of apparent vampirism are murdered under peculiar circumstances.

In the city of Darkhaven, monsters and men live side by side in peaceful harmony… more or less. When there’s a problem that someone needs solved, they turn to the great detective Daversham Rex to figure it out. In this introductory story, Rex is hired by the recently deceased Mrs. Gray to solve her murder in between tongue in cheek gags and quips.

Tag Line: After devastating event leaves a once-great nation in ruins, an angsty teen finds himself endowed with supernatural powers and stalked by a mysterious figure.

Following an apocalyptic event, angsty teenager Walker Grimm is bestowed with great supernatural powers. Now he has to use those powers to keep himself and a group of friends alive in a world overrun with monsters. The complication is that Walker is pursued by a mysterious and deadly creature called Sin.

Tag Line: Pursued by feudal warlords, crime syndicates, and dark magic guilds, a teenage vagabond and her companions embark on a magic and mayhem-filled space odyssey.

This was kind of an entertaining little snapshot of what could be a very cool ongoing series. A mix of fantasy and science fiction, a group of young renegades rely on luck and a bit of skill to offset a phenomenal lack of impulse control. Along the way, they make both friends and enemies of varying degrees of ability.

Tag Line: There’s no job too large or challenge too great for Free Lance. Trolls, witches, and demons: nothing will stand between him and his payment… and least, not for very long.

Villains, take heed! A knight is both brave and bold, & will not tolerate the victimization of the innocent. A knight would take your head rather than allow you to continue your wicked ways. Sadly for you, the mercenary Free Lance will do it for whoever pays him. Here, he’s looking to rescue the princess from the tower where the evil overlord has kept her imprisoned. He’s being paid her weight in gold to do it, but it really is the “rescue” part that should count.

Tag Line: Hurtling through uncharted space, a battalion of Crusaders wage war against a new breed of aliens whilst questioning their very own existence.

With humanity, known throughout the galaxy as sapiens, someone has to stand against our enemies. In a universe filled with hostile and aggressive lifeforms, the Astral Crusaders are the chosen few, the proud, the “last bastion of mankind”. Looking like it shares some genes with Warhammer, Astral Knights is a slick looking science fiction action piece. With a little polish, it could grow into something very cool.

Tag Line: Cursed with immortality, Drust must hunt the beings born of his demonic blood. Only after his family has been exterminated can this antlered warrior find the peace of death.

In what might be the most bizarre of the stories in this volume, Drust is the immortal title character on a quest to find and kill those responsible for his demonic blood. Despite his lack of interest in human affairs, he finds that he has to get involved in a war against the evil Lord Prospero. This introductory story has him escaping from captivity and facing one of the most dangerous warriors born to man.

And there you have it. Octal brings readers a taste of pretty much any genre of story they could possibly want to find. Covering tastes ranging from gritty crime drama to epic fantasy to intergalactic science fiction, if you can’t find something of interest in these pages I don’t know where else you might want to look. Keeping in mind that these are rough introductory pitches from independent creators, it isn’t too hard to imagine a diamond in the rough lurking around in there somewhere.