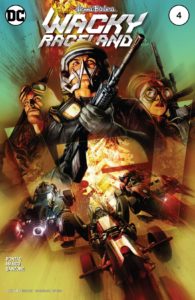 Earth lies in ruins. The unseen and omnipotent Announcer has promised that the victor of a series of races will be allowed into the winner’s circle of Utopia, a legendary paradise that is the last bastion of humanity on the scorched planet. The Wacky Racers and their sentient vehicles compete for survival as they speed through an apocalyptic desert filled with radioactive lakes, nanotech dust storms, and cannibalistic mutants. There’s only room for one winner, and anybody in second place will be left to die in the…

Our heroes head to the radioactive remains of Las Vegas for a little R&R between races, hoping for a jackpot of ammunition to add to their dwindling supplies. Instead, they arouse the ire of the ganglord Neon Caesar, who’s got an ax to grind with Red. Meanwhile, Muttley and his vehicles are lost in the labyrinthine sewers beneath the streets when the gangs of Vegas unite to eradicate the Racers. Our heroes must go it alone against the combined might of the Caesars, the Pharaohs, the Clowns, and the terrifying Combovers, who have great weapons. Terrific weapons. Really, they have the best weapons.
———-

All of the characters are here, but this is most definitely not the cartoon that I remember watching as a kid. Instead of the fun-loving slapstick comedy that was introduced by the Hanna Barbera company back in 1968, we’re blessed with a version that combines the old cartoon with something out of a Mad Max movie. Just to clarify, I’m not quite old enough to have been watching those original episodes, but the repeats and spin offs were still going strong when I was glued to the television on Saturday mornings, munching down chocolate sugar bomb cereal and cheering for my favorites.

Background… Y’see, back in the days when dinosaurs walked the Earth, we didn’t have Cartoon Network or Nickelodeon to bring us a constant barrage of cartoon shows. We had to wait until Saturday mornings, when our programming took over the networks from seven in the morning until eleven. I remember watching Super Friends (the Justice League without any angst), Thundarr the Barbarian (Conan with a laser sword), and of course the Wacky Races. There were a few incarnations of the show, all following the same formula of cartoon racers doing crazy things to win the ultimate prize: to be the World’s Wackiest Racer!

Huh… seems kinda silly now that I think about it. Whatever, don’t judge my generation without taking a good hard look at the concept behind Pokemon and Adventure Time.

Now, gone are the goofball antics and happy go lucky shenanigans. What DC and Hanna Barbera have brought to the page is the biggest group of degenerate reprobates, mutants, and survivors of a post-apocalyptic world. They’ve been gathered together by the all-seeing, all-knowing Announcer to test themselves against the dangers of this new world and each other in a series of races designed to push them to their extremes. To make it interesting, the Announcer has gifted their vehicles with sentient A.I., for better or worse.

In the first issue, the racers contend with a swarm of giant sandtipedes, lured in by the conniving Dick Dastardly in a bid to get rid of some of the competition. And there’s a bar fight, some wildly inappropriate ass slapping, and some talk about the place of the gender reassigned in a post-apocalyptic Nazi Reich. It all comes together in haphazard series of flashbacks and forward jumps as we’re brought into this horrific new world of cannibalistic mutants and bloodthirsty scavengers.

Like I said… this isn’t your parents’ old cartoon. 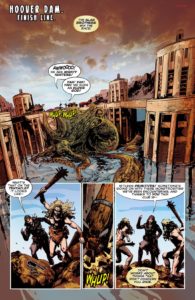 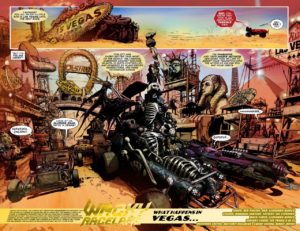 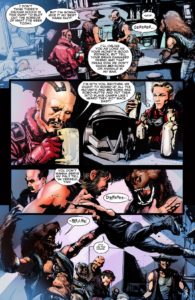