Frankie Kemp’s little boy was killed in the crossfire of gang warfare; ever since, Frankie has put on a mask and gone out to try to stop trouble before it begins. For years she’s been a vigilante in a world where superheroes belong on Saturday morning cartoons–but with the escape of a flu-borne supersoldier virus, Frankie, now called Chance, finds herself a powerless vigilante in a world with superpowers. Experience counts–but will it be enough to keep her alive?
———-

For the last five years, Frankie Kemp has led a double life. By day, she’s a lawyer working for the mayor’s office. By night she prowls the rooftops and alleyways as the costumed vigilante Chance. In those five years, she’s racked up quite a bit of experience but she was not prepared when a North Korean supervirus spread across the globe. One quarter of the population exposed to the virus came down with a brutal case of the flu. From there it got serious. A third of the people who got sick died, while a third recovered with no side effects. The final third, however, developed super powers. Now, Chance’s nights have become more complicated as she’s forced to contend with more than the average muggers and drug pushers. With no powers, she needs to use all of her training, all of her experience, to overcome the obstacles in front of her.

As with all good characters, not just heroes, there has to be a motivation. The driving force behind Frankie’s activities is the death of her son. She was young, still in law school when she met Tom. Soon after their marriage, Alex was born. Still in school, listening to the nightly arguments and drug deals gone wrong outside their apartment, the family is shattered when a stray bullet takes Alex away from the young couple. With the tragic death comes the realization that Alex was the only thing keeping the couple together.

Soon enough, Frankie is on her own, doing her level best to build a life out of the broken mess she’s left with. She throws herself into her career and into all sorts of physical training, from karate and aikido to parkour. Armed with that training, driven by the overpowering need to do everything in her power to make up for that one lost life, Frankie puts on a mask and takes to the streets. When her exploits start to make tabloid headlines, she becomes known as the crime fighting woman who “likes to take a Chance”. The name stuck.

Her latest challenge hits her hard when she finds out that Eric Black, the man responsible for the death of her son, has escaped from prison. No longer just a street thug, Black has survived the Korean Superflu as a member of the third category. Able to become intangible and slip in and out of the shadows, he calls himself Shadowslide, and he couldn’t be happier with this new lease on his life of crime.

We at thePullbox take a little bit of pride in the fact that our focus is primarily on smaller independent titles and publishers. Over the last few years, I’ve been given a lot of comics to read. Some have been great. Some have been… not great. Between you and me, I don’t like reviewing a book unless I can find something in it that shines, whether that’s in the art, the writing, or the concept. I’m laying out a review on something that someone out there put a lot of work into so that they could send it out into the world to be judged. My reviews are only my opinions, but I think they’re opinions based on a lifetime of reading, not just comics but books from pretty much every genre. I know what I like.

It is a distinct pleasure to tell you that Take a Chance was awesome, from first page to last. It came as no surprise to find out that C.E. Murphy is a published author (some of her book series: The Walker Papers, The Inheritors’ Cycle, & The Worldwalker Duology), because I found none of the common writing glitches that stand out with some writers who are just starting out. Coupled with some outstanding artwork from Ardian Syaf, and this was a book I was more than happy to take a chance on (yeah, I know, I hated myself a little bit for that one…)

Frankie Kemp is healing. The damage that’s been most devastating to her has nothing to do with physical injuries (she seems to take those in stride pretty well), but from the emotional trauma that would have to come from seeing your child killed by random violence. In the story’s quiet moments, Frankie reveals that while she’s becoming aware of how broken she really is, she’s completely unable to turn away from her life as Chance. This isn’t a two dimensional character just out there doing her thing like an action figure wannabe from a Michael Bay movie. Frankie and the people around her face consequences and complications of her double life that are often left ignored in comic books. In fact, Frankie makes several wry comments about that very fact. In one scene, for instance, she mentally kicks herself for packing everything but her superhero pants, and is forced to go into action in a mask, skirt, and heels. Everything comes together, the dialogue both spoken and silent, to present a story that’s very well written, and has me wanting to look up more of Murphy’s work.

As impressive as C.E. Murphy’s writing is, that’s still only half of the equation. We are talking about a comic book here, and a well written comic book without solid artwork can still get lost in the crowd. No worries there, kids. Ardian Syaf is a name that, by all rights, we should be hearing a lot more of. His character designs, especially when compared to Murphy’s original concept art, elevates Chance and her world by a notch or three. Physically, with Frankie Kemp we’re given a woman who is obviously in great shape. She’s muscular without being too bulky, she wears action hero appropriate footwear, and she never strikes a pose that serves no purpose but to display proportionately improbable assets. What’s more, Syaf’s eye for the action scenes is outstanding. Fight scenes flow through the panels with an almost cinematic choreography. I could see body/body/head combinations flowing as Chance set her opponents up for a finishing blow.

If you haven’t already picked up on it, I’m giving Take a Chance a hugely enthusiastic thumbs up. This is a superhero series that doesn’t ignore real world issues or the laws of probability, and delivers a solid cast of characters and action to spare. As an entry into the idiecomic world, I think it’s a pretty safe bet. 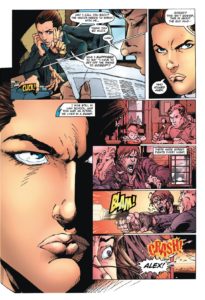 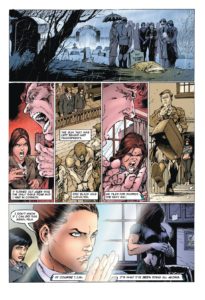 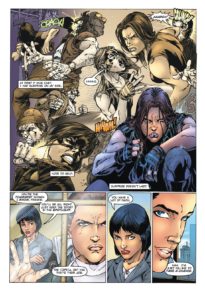