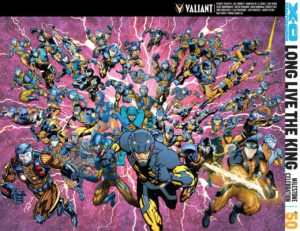 For centuries, the sacred X-O Manowar armor has stood unrivaled as the universe’s most powerful weapon. Today, will it equal Earth’s doom? An unthinkable alien race known only as The Torment has come to our world in search of the armor’s secrets. Now, they stand opposed by Aric of Dacia – former slave, noble warrior, resolute king, and current master of the armor’s near-limitless capabilities. But is one man…and one weapon…enough to repel a force capable of leveling a thousand civilizations?

He’s been many things and been known by many names; Aric of Dacia, King of the Visigoths, the Worthy One chosen by the Vine’s sacred armor Shanhara. Conqueror, hero, and husband. X-O Manowar. Among the pantheon of Valiant’s flagship titles, Aric has been Superman, Iron Man, and Thor all rolled into one. After countless battles, he has “crushed his enemies and seen them scattered before him”, and now he’s faced with something completely new.

In a battle to end all battles, Aric is joined by trusted allies Livewire and Ninjak, enemy-turned-reluctant-ally Commander Trill of the Vine, and Gunnery Sergeant Lewis of Earth’s own special armored force. Together they all fight for their lives, and the lives of everyone on Earth, against a host of alien gods called the Torment. Even with the devastating power of the Shanhara armor and this unprecedented gathering of muscle to back him up, Aric is snatched up by one of the Torment and devoured.

This understandably has a disheartening effect on Aric’s allies, and there’s a pause as everyone processes the new turn of events. With the knowledge that X-O Manowar was arguably the most powerful among them, the remaining defenders rally. If they can’t stop the Torment and avenge the death of their champion and friend, the united forces of Earth and Vine will die trying.

What none of them know is that Aric isn’t dead. Inside the Torment, he’s taking a little bit of a trip through the entirety of reality. Joined completely in an alliance with the near-sentient Shanhara armor, Aric isn’t obliterated or driven insane by the revelation he’s undergoing. He’s able to process the ordeal, and in the course of a few seconds he experiences the lives of every creature on every planet in every galaxy. It’s kind of a mind-blower and when it’s done, Aric finally has the insight he needs to resolve this latest conflict.

As one of the first independent publishers, Valiant kicked off their line of comics in the mid to late 80’s. Among that initial line up was X-O Manowar. A few years ago, Valiant rebooted their entire line of books and re-established themselves as producers of some of the best character-driven stories, hands down. And now, with the fiftieth issue of their flagship title, it looks like they’re one of the few comic book publishers to acknowledge one of the most important aspects of any story: the End.

This is it, the final issue of X-O Manowar, and as far as endings go it does manage to pull off a pretty epic finale. We’re talking about a battle for All Things as Aric and company face off against an alien pantheon, so the stakes are pretty… y’know… large.

Along with the conclusion to Aric’s time and universe spanning adventure, the over-sized issue brings three vignettes that give glimpses into the past and possible future of X-O Manowar. These are more character studies, insights into the leader of men that the primitive turned king has become over the course of his life. It’s all wrapped nicely by the final turn of the page, and anyone who’s been following the series from the beginning should be well satisfied.

You caught that, huh, the bit about Aric’s “possible future”? Come on. This fifty issue story is done, but for a character as epic as Aric of Dacia there’s never only one story to tell. 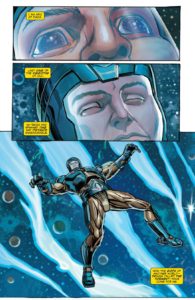 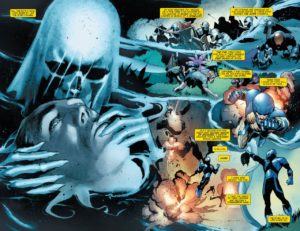 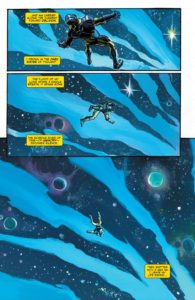