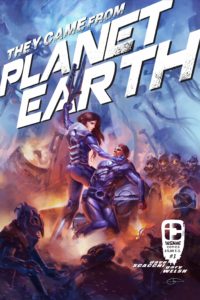 “They said they came in peace. But, the lie was just their first mistake.
The human invaders that attacked our ancestors brought nothing but death and destruction. The knowledge and technology they left behind forever changed our world… forever changed us.
When they return, they will pay. They will all pay”
THEY CAME FROM PLANET EARTH
———-

After a series of strange lights are seen coming from the Moon’s surface, probes are sent to investigate and send back images of strange new structures. Looking more closely at these structures, and at the Moon itself, we find something incredible. The Moon isn’t a natural celestial body at all, but is in fact a hollow shell, an artificial structure of alien design. More than that, inside that shell is a wormhole, apparently designed as a mode of interstellar transportation. Being the curious lot that we are, we send a team of scientists through the wormhole to see where it leads. What they find could have made the crew of the Nostromo pretty happy about what they found out in the black…

Once again, Insane Comics shows that it plans to cover every conceivable genre it can. Already sitting comfortably with titles covering supernatural, horror, action, as well as the tried and true superhero niche, the Insanity continues with the inclusion of science fiction… if not sci fi horror.

The Orion One crew has successfully traversed the wormhole and found a planet on the other side, but that’s when things get a little dicey. The term “planet fall” is painfully appropriate as their landing on this alien world turns out to be a little less “textbook” and a lot more “crash”. Adding to their problems, the ship’s hull was ripped open during the crash and a member of the Orion crew was sucked out while still in the upper atmosphere. And then, before the remaining crewmembers can fully take stock of their situation, the insectoid occupants of the planet arrive to see what’s arrived on their doorstep.

As in any really cool science fiction story, First Contact goes downhill from there, and fast. As is to be expected, the aliens are panicky and all too fast to assume the worst in the face of appearances and language barriers. When one of the aliens strikes out in fear, attacking before intentions can be established, the time for diplomacy is passed and the violence escalates. You may or may not have caught it already, but as the title hints, we are the aliens in this case. It’s one of the Orion crew who draws first blood, and it remains to be seen what their host’s true intentions may have been.

What I thought Scacchi and Welsh did very well was convey a sense of the true “alien”. Possibly more difficult in a black and white format, they did a great job of playing with the creep factor as the human scientists are confronted with their new environment and its inhabitants. Now the fun will be in how well the story is carried out from here, whether or not they plan to continue with their premise of the people as alien invaders. This latest offering from Insane Comics was an entertaining, and fast, read.

The art and writing worked really well together, each pulling its weight in the storytelling. The tension of circumstances was written in the terse dialogue between crewmembers, and drawn out in the wide eyed grimaces as the unknown expressed its indifference to the circumstances of their intrusion. The fact that we’re given no translation for the alien (the insectoid aliens, not the human aliens) language leaves the reader completely in the dark. We’re left wondering whether or not things would’ve gone any better for the Orion crew if they’d been better able to manage their fear. I thought it worked out well, parsing out the story bit by bit, instead of establishing the “good guys” and the “bad guys” right off the bat.

My bottom line? They Came From Planet Earth is off to a solid start as an entry in the sci fi horror genre. With the exception of the many Aliens titles out there, it’s not a genre we see often enough in comics, at least not really done well. I hope the bar set in this first issue is one that’s maintained, if not raised even higher with a few more twists and turns the farther into the story we go… 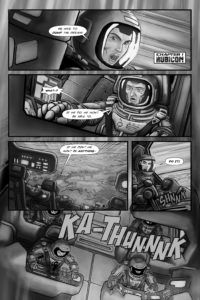 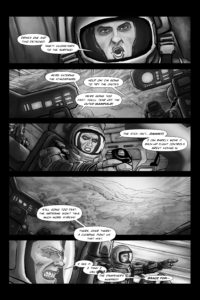 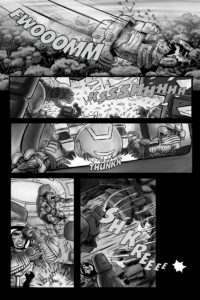 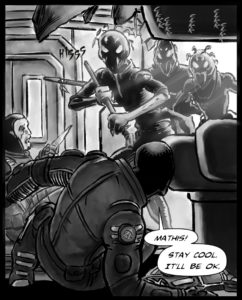