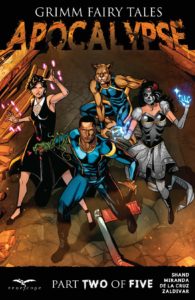 The casts of Zenescope’s flagship series – Grimm Fairy Tales, Robyn Hood, and Hellchild – unite for an event to end all comic book events… the apocalypse. One year ago, Robyn Hood and Marian Quin united to imprison the Four Horsemen underneath New York City, preventing the apocalypse. Now, faced with the return of these unstoppable, immortal demons, Robyn had a choice: sacrifice the world… or her soul.

“Last year, Robyn Hood and her friends defeated the Cabal, an organization of ancient witches and wizards who were engaging in annual ritual sacrifices. However, with the Cabal gone, the evil that they had been attempting to keep at bay has broken free. Infighting within Robyn’s group has divided the heroes, who are unable to prevent the Four Horsemen of the Apocalypse from breaking free. Now, as the Horsemen march, can Robyn bring her team together to take down this cataclysmic threat?”

As in all things, the center cannot hold when the bonds keeping the whole together fall apart. When taking into account the completely disparate individuals making up this particular group of heroes, it shouldn’t come as a big shock when personalities clash and motivations come into doubt. Take any room full of “alpha” personalities, all leaders at the height of their unique powers and abilities, and just watch the tension build.

Now, with her forces greatly reduced, Robyn Locksley is trying to stand against none other than the actual Four Horsemen of the Apocalypse. With her are the members of Team Robyn, and an impressive lineup it is. Among them are Liesel Van Helsing, whose family has been standing against supernatural enemies for generations; Hades Blackstone, formerly the Greek god of the Underworld, now living and enjoying life among mortals; Angelica Blackstone, the half-mortal daughter of Hades; and a powerful trio of witches, Marian Quin, Sam Cavander, and Sidney Barley. Meanwhile, unaware of the Apocalyptic threat, Skyler Mathers, Lance du Lac, Mary Medina, and the anthropomorphic feline Wiglaf are taking in the sights of New York City.

Without a doubt, the artwork by Miranda is well above par. The characters are clearly defined, and even when they aren’t saying anything, their expressions do a fantastic job of saying what they’ve got on their minds. Further, the dynamic nature of the action scenes carries the comic book into that most revered of comic book categories: Cinematic. No joke, these books deserve the live action treatment, and if the growing lineup on SyFy is any indication, they’re on their way. But as good as the art is, and it really is pretty damn good, it isn’t what I think elevates this book.

I am a huge fan of the works of Joss Whedon. I watched Buffy the Vampire Slayer faithfully when it first aired, followed along a little more sporadically through Angel’s run, and was (I think) justifiably outraged when Firefly suffered the indignity of being canceled after filming only 13 episodes (as a network, I blame Fox for my trust issues…). Sure, all of those shows had interesting plots (a high school cheerleader with superhuman powers, standing alone against the minions of darkness?), and they had entertaining action, but it was always the characters and their interactions that inspired the rabidly loyal cult followings they continue to enjoy, years after their cancellations.

Writer Pat Shand has managed to do much of the same with the characters of his book. Not satisfied to just let Hades, lord of the Underworld, swing a heavy metaphysical (and metaphorical) baseball bat, wading into battle without fear of consequences, he’s given Hades depth. He’s in love with a mortal. He has a daughter who resents him, and he’s forced to acknowledge that he hasn’t done the best job as a father. Robyn Locksley is a warrior without peer, and is literally fighting for the fate of the world, but when she sees the consequences her leadership has on her friends and followers, it weighs on her. These are all traits of well-written, three dimensional people, not just caricatures or simple plot devices thrown into a comic book to look pretty.

Bottom line? These Fairy Tales may lean heavily on the Grimm side, but they all have motivations that go beyond the comic book trope of “good vs evil”. This is a book that is a good read, even in between the action beats when there really isn’t anything going on but banter and chitchat. If there’s a problem that I had, it’s that there’s so much going on between these characters that if you’re not already familiar with them (which I admittedly am not), you’re going to be left feeling like you missed something. On the bright side, I guess that just means there’s more reading to do… 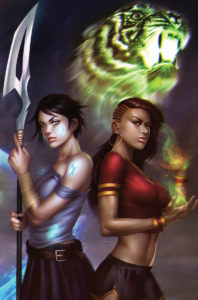