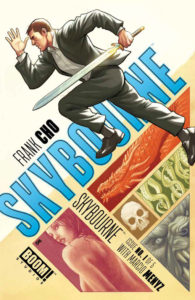 A new, original series from celebrated creator Frank Cho (Totally Awesome Hulk, Savage Wolverine)!
Full of fast-paced action, Skybourne is Indiana Jones meets James Bond with fantasy elements thrown in. Cho describes it as “one of the most cinematic stories I’ve envisioned.”
The legend of King Arthur is alive and well in modern day. Only one man, Skybourne, can stop the evil Merlin from destroying the world.
———-

29 years ago, somewhere over rural China, Thomas Skybourne holds a picture of a beautiful woman in his hands. He lovingly kisses the picture and then tucks it away in a pocket for safekeeping. The scene pulls back, and we see that this man looks to be plummeting to what surely must be his death, the ground stretching out so far below him that the only details we can make out are roads and maybe some trees. This has to be it for the hapless fellow. Two Chinese men see the figure as he falls to the ground with dramatic impact. They rush to the crater, no doubt to witness the pile of goo that should be left behind, only to see the man seemingly intact. He looks almost peaceful, like he could be sleeping comfortably… and then his eyes open, leaving no doubt that this is no ordinary man.

Of course not! This is a friggin comic book we’re reading, and it’s one concocted and drawn by Frank Cho. If it was about ordinary dudes, the book would’ve been like a page long.

No, this book is about the offspring of Lazarus, the guy who died and according to Biblical lore was brought back to life by Jesus. What the Bible left out of its story, at least according to Frank Cho, is that Lazarus went on to sire three children. And of course, why wouldn’t he? At the time, the Bible was all about propagating and multiplying, so it is a pretty logical assumption. The story gets a twist when we’re given the idea that there is no way these children could be anything but extraordinary, blessed with immortality, superhuman strength and speed, and invincibility. This is all beautifully and visually shown in the above mentioned freefall from who knows how high.

The next scene moves forward 29 years to a warehouse in Istanbul, Turkey. A man points a pretty scary looking rifle at a helpless looking young woman, and a black market deal is about to go south. The woman, Grace Skybourne, is there on behalf of the Mountain Top Foundation to collect an artifact purchased from the requisite unsavory types. Before you start worrying about the poor helpless lass, it should be pointed out that she’s sister to the man who made a sizeable crater in the Chinese countryside and reacted with nothing more than some off-color language. Worry more for the unsavories who probably should have just followed through with their end of the transaction and given up the artifact.

I’m not gonna lie, I’m in no way shape or form an impartial reviewer on this book. I’ve been a fan of Cho’s since I first got a look at his tongue firmly in cheek comic strip, Liberty Meadows. My interest grew as I found more of his work, in both mainstream comics (check out Savage Wolverine from Marvel) and his own work, culminating in this very book. So what makes him so damned readable? It definitely goes beyond his skills as an artist and his knack for creating gorgeous pinup style works. It’s the way he’s able to meld his striking visual style with a wry humor, his dynamic action sequences with sharp dialogue that doesn’t come across as stilted or overdone.

And holy hannah is the action dynamic. Cho conducts his violence and mayhem with flair, an almost cinematic sense of choreography, and by the time Ms. Skybourne was done I was feeling a little bit bad for the armed men. Make no mistake, the violence within these pages is both graphic and visceral, and definitely not meant for young impressionable minds. Or old impressionable minds. Or anyone with a weak stomach. I’m just gonna say that Grace’s dry cleaning bill has to be murder, and leave it at that.

Not content to simply crank out the eye-candy either, Frank Cho has constructed an interesting tale with centuries worth of backstory to fill in. He’s created a pretty cool mythology simply by building on well-established religious writings (think of them as histories or myths as you see fit… either works in the context of Skybourne), and he’s done it with a few deft strokes of the pen. Pencil. I honestly don’t know what medium Cho uses when he’s writing or drawing, and I really couldn’t care less. His results are impressive.

So take a look at Skybourne, an original story from Frank Cho and the folks at Boom! Studios. It’s got action. It’s got… well, more action, with hints of interesting and developed characters yet to be introduced. This is a solid start to what looks to be an intense and action-packed five issue run. 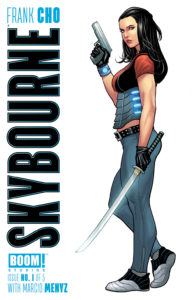 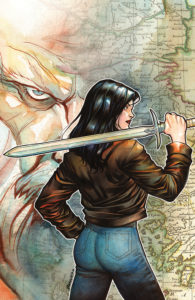 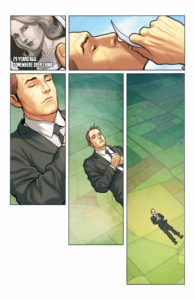 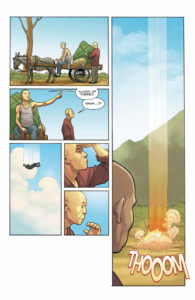 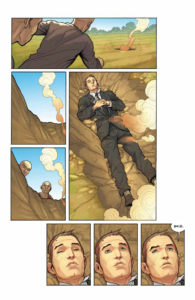 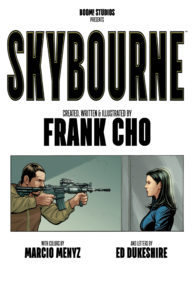 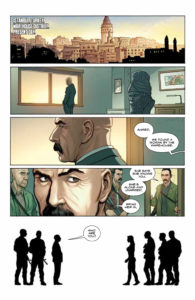