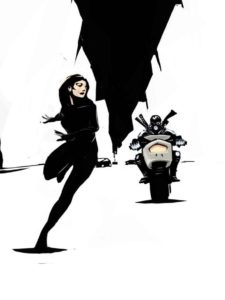 (From The Girl’s Kickstarter home page)
Written by Stu Perrins and with art by Pat O’Donnell, The Girl is a six part sci-fi/adventure/superhero/dark humor comic set in an unspecified point in the future where there is virtually no greenery and the metal structure is king.

The Girl is melting pot of OTT ingredients, and is probably (if a little arrogantly) described as a cross between The Umbrella Academy and Terry Gilliam’s Brazil with 2000ad’s satirical edge.

A clone of an unknown secret agent is being pursued by not only her creator but also the police. As the series progresses we discover who she was cloned from and why Planet Earth’s last remaining superhero ‘Dr Deathless’ is so intent on protecting her.
———-

Hard charging indie publisher, Insane Comics, has been in overdrive. Having first heard of them earlier this year at the Wonder Con in Milwaukee, I’ve repeatedly found reasons to dip back into their expanding universe. Whatever genre of comic book interests you, chances are really good that Insane has the series for you. They’ve got sci fi, dark horror (Hollow Girl), western (Hang Low, Aim High), sci fi/Western mashups (Death-Rattler), and the tried and true spandex wearing superhero (Chess-Masters), all well represented on their roster, spanning pretty much all tastes.

Among their titles, the four issue limited series, Whatever Happened to the Archetype? is a highlight that touches on what happens to old superheroes when they hang up their tights… Written by Stu Perrins with art by Ron Gravelle, it’s one of those stories that almost needs to be read. It’s a moral imperative. Okay, it might not be quite that cool, but it’s up there and if you’re interested in an opinion, you can see my review here.

But all of that is old news, done, fini, history of the ancient past variety. I only mention it because Insane Comics is going to be bringing another title into the fold, and this title is also going to be written by Stu Perrins, with art by Pat O’Donnell. It’s going to be Insane’s first title to be hitting the ground in the United Kingdom, and to give it a solid start there’s a Kickstarter campaign to get it all rolling. So what is it?

The Girl looks to be a rolicking sci fi action piece acting as the backdrop to a pretty unique sounding cast of characters. Here’s a peek at a few of the stars, taken from the Kickstarter page:

The Girl
Cloned from an unknown secret agent and known only as ‘The Girl’, our ‘heroine’ is an attractive (although not overly sexual) young woman in her early twenties. She is incredibly athletic, which gives her confidence that contradicts her otherwise vulnerable situation.

Dr Deathless
Dr Deathless is Planet Earth’s last remaining superhero. Having lived thousands of years, he can no longer remember who he really is or what is his real name is, which is why he now goes by the name ‘Dr Deathless’- Dr because of his healing abilities and Deathless because he is immortal. Note- Because of his immortal abilities, Dr Deathless is a smoker and alcoholic. Although still a handsome man, his hair is unkempt and he constantly has five days of stubble.

Chessington Hope
Although he appears to be more Donald Trump than Darth Vader, our villain is still an intimidating character with short sharp blasts of violence peppering his otherwise calm yet sinister demeanour. Note- A millionaire business and scientist, Chessington Hope is rarely not seen in an expensive suit.

I actually did have a chance to ask Mr. Perrins if he had anything he’d like to offer thePullbox about his book, and he did…

The Girl is a melting pot of ideas. Its part sci-fi epic, part superhero story, part murder mystery and part satire on corporate business and it’s also the most batshit crazy thing I’ve created so far. Where ‘Whatever happened to the Archetype?’ was a very human story, this is it’s polar opposite. It doesn’t stop for breathe, it just keeps on going leaving you dizzy and soaked in sweat. There are four different story lines running alongside each other and in some cases it won’t be obvious how the different stories are related to each other until the final issue. There are clues along the way, but it’ll certainly keep the reader guessing/ It’s something I’m immensely proud of which is why I want people to get behind this Kickstarter campaign.

The series will be published through Insane Comics, but this campaign was created as a way of getting the books into UK comic stores and conventions, which as a lowly Brit is something I want to happen. The reaction to what people have seen of the project so far is extremely encouraging, and it’s even seen some people inspired enough to create some fan art which is incredibly flattering. Which, if nothing else is an indication of just how amazing an artist Pat O’Donnell is. I got a message recently from someone who had seen some of the images and they were convinced that the art was by Steve Yeowell.

If you’ve already pledged, thank you. If not, what you waiting for?

So like the man says, what are you waiting for? The lower level contributions should be able to fit into most budgets, and as in all things “many hands make light work.” The more contributions that get behind this project, the better is is for everyone. And I’m not just some random guy running his mouth… I’m also a contributor who’s really looking forward to getting his mitts on this book. So, I guess all that’s left now is to post some samples of the very cool looking art for The Girl, and we can all go on about our business. 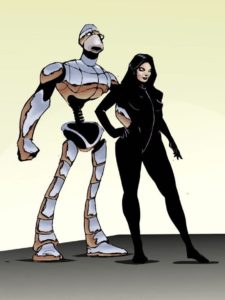 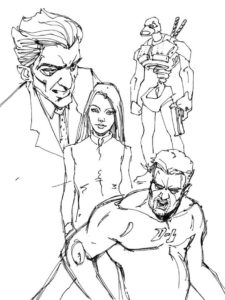 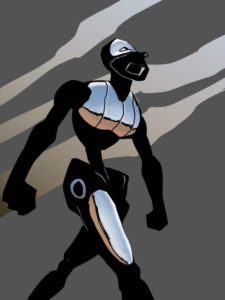