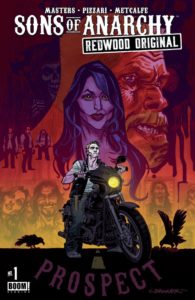 For the first time anywhere, read the untold story of how a young Jax Teller, 18 years old and fresh out of high school, decides to prospect his dead father’s—and his current stepfather’s—MC, the Sons of Anarchy. The only all-new, original ongoing story for fans of Sons of Anarchy! Created under complete supervision of SOA show creator Kurt Sutter, the story will feature younger versions of all the characters you’ve come to know and love, including Opie, Clay, Jemma, Tig, and Chibs!
———-

Jax Teller’s longtime girlfriend Tara has gotten on a bus, leaving her world of Charming, California behind. The jilted ex-boyfriend, Jax wastes no time at all venting his anger on the first person to give the slightest perceived insult. Now, the young high school dropout is left with nothing to do but focus on his attempts to gain access to the legacy left behind by his father, full membership in the Sons of Anarchy Motorcycle Club, Redwood Originals. To do that, he’ll have to impress the club’s reigning President Clay Morrow.

If you were a fan of the FX show Sons of Anarchy, and you’re finding yourself a little lost without that band of lovable outlaw bastards, you’re in luck. Redwood Original from Boom! is taking the fans back into that chaotic world of fists, guns, drugs, and mixed feelings (we’re rooting for the murderous gun runners!). The treat is that we’re not looking at a part of the timeline that we’ve already seen. Jax Teller isn’t at the head of the Table, or the V.P. He’s not even the respected son of SAMCRO’s former leader, JT, ready to rise through the club’s ranks.

This is the story of Jax Teller, SAMCRO prospect, recently dumped by his high school sweetheart Tara, and acting out his angst in an effort to impress reigning club Prez, Clay. See, we’ve all seen Jax as the upwardly mobile, introspective tactician. We have yet to be introduced to this younger, much more violent and prone to act on impulse Jax. Clay Morrow is still firmly embedded in his position as leader of the Sons, and his position as Gemma’s second husband. Opie is not only still alive, but he’s yet to accept the role of club prospect, instead looking to other life paths in front of him.

In the writing, it comes across pretty quick that Ollie Masters has done his homework. All of the characters speak in the “voices” fans will remember. When Tig and Bobby are arguing over the difference between Russia and Lithuania, it was like a couple familiar friends I hadn’t heard from in a while bickering back and forth in my head. And Opie… loyal friend to the end Opie who left the show in brutally definitive fashion that left no openings for a later return. The fact that this flashback series gives us a look at a younger Opie, Jax’s best friend and not just the club’s strong armed demolitions expert, makes me happy to continue reading for however long the book runs.

None of the loyalty shown to the FX television show should be a surprise, given Kurt Sutter’s participation in this prequel comic series. The Sons of Anarchy is his brainchild, and I couldn’t see him handing his kids over into just anyone’s care. With Boom! and the creative team of Masters and Pizzari, SAMCRO rides again! 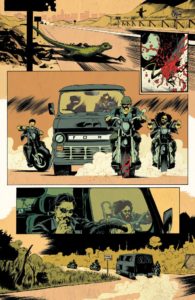 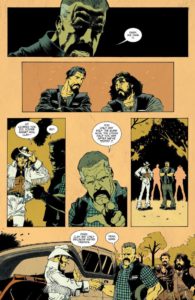 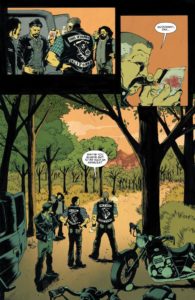