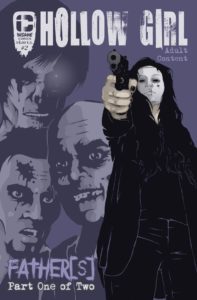 When Katherine ‘Kat’ Harlow was ten-years-old, she killed her parents. Showing no sign of remorse, she was said to be a girl devoid of conscience or soul – a Hollow Girl. Six years later, she reappeared as a brutal masked vigilante, avenging the dead with retributive violence. That is what most people know about Hollow Girl. That’s enough, right? Wrong. Because there is a question that was never asked back when it all began, the answer to which changes everything.

Katherine Harlow, the Hollow Girl, continues on her mission to seek justice for the dead. Being without a soul, being “hollow”, allows her to host the spirits of the wronged as they seek out someone to tip the scales back on their behalf. Joining Hollow Girl in this is the twisted priest, her self-appointed mentor and guardian, Skelton, and damaged homicide detective Midwinter, whose motives for helping Katherine make him just as damaged as anyone else in this series.

In the first issue of the series, we were introduced to the concept of the “Hollow Girl”, and as far as concepts go I thought it was a pretty damn awesome one. Not satisfied to follow the tried, true, and (sorry, Frank) overused concept of the revenge driven vigilante, Luke Cooper added a pretty slick supernatural element to the recipe. Katherine, through some sadistic twist of fate- or maybe even divine intervention- was born without a soul and in a sociopathic display, at the age of ten, she murdered her parents.

Institutionalized for years, Katherine escapes and finds herself in the company of very scary-looking priest, Skelton (think about that name, and yes… that’s him). Skelton tells Katherine that because she’s “hollow”, she’s able to take in restless spirits for a time, and to right their wrongs as an agent of the Lord. She’s also assisted by homicide detective Midwinter, himself a grieving father left severely damaged by the death of his daughter Jessica. For his part, Midwinter doles out information on the locations and activities of the criminals she hunts, in exchange for her hosting Jessica and allowing him time to speak with his departed daughter.

Now in the second issue of Insane Comics’ supremely dark comic series, we are given more background on Katherine. Turns out she didn’t simply kill her parents in a sociopathic “meh, why not?” display, but that she did indeed have a motive and a fairly compelling one at that. Luke Cooper also treats us to the gratifying confirmation that Skelton really is as creepifying as we’d suspected and that we weren’t just jumping to stereotypical conclusions based on appearance. By the end of the second issue, while we may be given some answers as to Katherine’s history, we are most definitely left with some questions.

As you may have guessed from my review so far, I think Hollow Girl is a layered story that explores some pretty dark tones and plots, and uses no little amount of symbolic imagery to do it. Without a doubt, Cooper’s artistic style alone is a great indicator, as he gives his supremely flawed characters a certain amount of inherent “wrongness” just in their design. The black and white format presents a world of stark contrasts, and serves to inject a very noir feel to it all.

Not to say that there aren’t downfalls to some of the artistic choices made. By imbuing his more warped characters with obviously sinister character designs, Cooper might lose some readers who do look forward to the surprise reveal. Also, the story tends to bounce abruptly in its narrative, with no warning or explanation. None of this should take away from a story that I think is pretty original in concept, and unforgiving in its exploration of some pretty intense and twisted themes. It’s also worth noting, again since it’s shown way up there at the top of the post, that Cooper carries the full burden of this book: writing, artwork, and even lettering.

If you’re ready to take on an unflinching look into a seedy underbelly of a world, you’re not at all the squeamish type when it comes to themes that some think are best left in the societal sub-conscious, and you’re just interested in something new, dip into Hollow Girl. Just keep in mind that if you stick around too long, there might be a vengeful spirit clamoring to get in there with you so you might not wanna stick around too long. 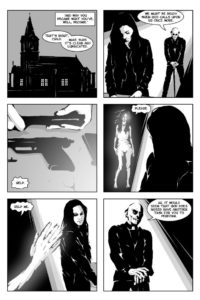 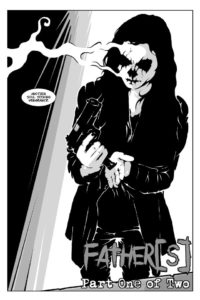 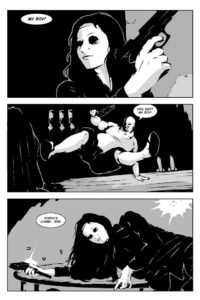