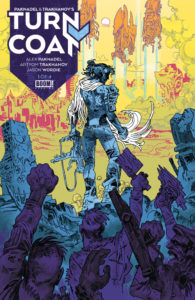 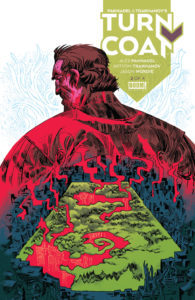 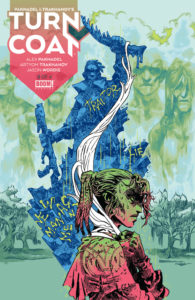 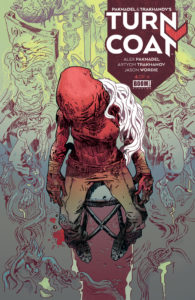 Employing the most compelling elements of science fiction and the detective genre, Turncoat is a gripping exploration of power vacuums and the legacy of oppression. Alex Paknadel (Arcadia) and Artyom Trakhanov (Undertow) tell the story of a guilt-ridden protagonist through a grisly quest for a truth. Turncoat will scratch that itch you have for dark sci-fi like Blade Runner, The Forever War, and Neuromancer.

300 years since humanity was brutally subjugated by the alien race known simply as the Management. Two years since these invaders abandoned Earth to return to their home world. Following her participation in the brutal massacre of human-alien hybrids left behind by the Management, resistance fighter Marta Gonzalez declines to join the new human government and starts her own private detective agency instead. Gonzalez is forced to confront her own bloody past and acknowledge the fact that the transition from oppression to emancipation is anything but clean.
———-

Everyone loves a story about plucky freedom fighters releasing the shackles put in place by an occupying force. When the people rise up against invaders and send them packing against all odds, everyone feels that surge of pride, shares in the accomplishment. Let’s face it, at some point in history, there isn’t a country or a people who haven’t at one time or another felt the yoke of occupation. So it is that these stories, told over and over again in science fiction and fantasy, ignite those feelings regardless of repetition. If that is the story you’re looking for, stop reading now. Move along.

Turncoat is a story about the aftermath of war and long term occupation. The people of Earth lived their lives for centuries under the thumb of the alien race known only as Management. In that time, the very fact of their subjugation was forgotten by many and life went on. Management kept essential services up and running, people worked for a living, and thanks to hybridization the lines between human and alien were becoming blurred. And then, finally, the people rose up and inexplicably Management left. For many, liberation was a catastrophic event. With Management gone, the infrastructure they’d put in place seemed doomed to collapse. Only through the valiant efforts of determined leaders would life be able to move on.

For Marta Gonzalez, the stark realities of her life were easily read in terms of before and after. Under the rule of Management, she was a cop. She worked, like most cops, to maintain order and public safety. That her job also included delivering certain suspects to secret Management sites for “advanced interrogation” was a brutal reality she lived with, until the weight of her actions pushed her to act against her rulers. She joined the resistance just in time, aiding in the final push to freedom for the human race. Now Marta works as a private investigator, living in the remains of what Management left behind, trying to piece together parts of a puzzle that no one seems interested in solving.

At its core, Turncoat is a political thriller that could be comfortably placed alongside classics like The Manchurian Candidate and The Bourne Identity. The post-Management world isn’t pretty, with cityscapes seemingly grown in crustacean-like clusters, and people living in a mix of fear and hope for their return. Writer Alex Paknadel presents a reality in which the simple act of ousting a regime is only the beginning of the story, and it’s a story that can be seen time and time again in world headlines. It’s a world in which things like compromise and adaptation are every bit as horrifying as the concept of invasion. That world is brought to a kind of twisted life in the artwork of Artyom Trakhanov. The landscapes are often unsettling, not allowing the eye to really settle in any one place for very long before the rolling lines carrying it along to the next point of interest. Every inch of the page is taken up by details that mean something, even if that meaning is to show how very flawed the “victors” really are.

Turncoat isn’t going to be the thing for a casual comic book reader. To be honest, it might even be a little off-putting for some, as the visual style takes a little getting used to. But for readers interested in dipping their toes into deep waters, it could very well act as an honest reflection on the pros and cons of independence. “Nature abhors a vacuum” is a universal truth, and is a concept at the heart of this story. With Management gone, who is left behind to fill their role? 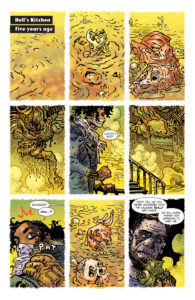 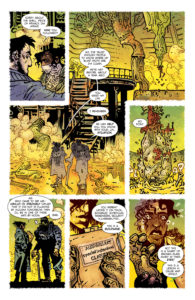 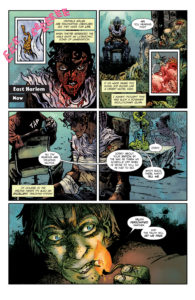 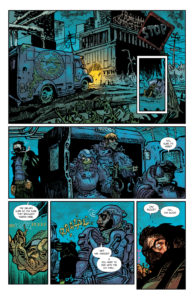 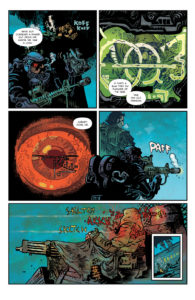