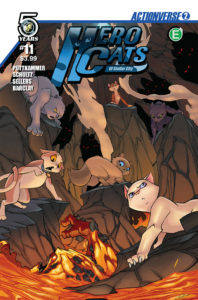 The Hero Cats world tour continues! After crashing on a jungle island, Ace and his team meet Malo and his brother Keb. But something’s not right. The island spirits are affecting our heroes in dangerous ways. Will they be Jungle Cats forever?!
———-

Out of all the comics in all the world, you might be wondering how I decided to pick up Hero Cats #11 to review… Here’s the thing: I have two adult kids, and I remember reading time. The biggest challenge was usually finding something to read to them that was fun for everyone involved. So, as a parent, I’m officially endorsing the Actionverse title Hero Cats as some prime reading material for all ages.

The issue opens with a crashed airplane. Ace and his team of Hero Cats have benefitted from the adage “any landing you can walk away from…”, as well as Rocket’s love of flight simulator video games. Don’t ask me now a cat managed to fly a plane at all, much less brought it to the ground in anything resembling one piece, because we’re not just talking about any old ordinary group of house cats here. As they take stock of their surroundings, the cats find themselves in an unknown jungle on an unknown island, completely out of their element. As Belle, newest addition to the group and a bit of a primadonna, puts it, “I should be back in Stellar City sleeping comfortably on my porch.”

In their search for some way off of the island and back to civilization, the Cats come across a battle between a gorilla and someone who looks like a Maori (Pacific Islander) warrior. Against all odds, the warrior overpowers the gorilla and the fight is finished. Introducing himself as Malo, because it turns out that Malo has the ability to speak to and understand animals of all kinds, the Cats find out that all of the forest creatures of the Misty Islands have been behaving with uncharacteristic aggression. On top of that, Malo’s brother, Keb has gone missing. Assuring Malo that his team is more than just a group of “baby lions”, Ace promises to help Malo get to the bottom of the mystery. In exchange, Malo promises to do what he can to help the Hero Cats get off of the island.

Not having read any of the previous issues, one thing becomes clear pretty early on… Hero Cats is a story in which pretty much anything goes. Not only are our main characters a group of intelligent super cats, not anthropomorphized at all but just looking like pretty ordinary house cats, but it’s also made clear that geographical oddities will be considered the norm. For instance, the obvious fight between a Maori warrior and a gorilla. My geography isn’t the best, but I don’t believe those two groups have ever been formally introduced. Once I got my head around that conundrum, I was able to settle in and see the story for what it is… a flight of fancy where if it’s cool and fun, it can find a home among these pages.

There are some jumps in the dialogue that were a little confusing, where it almost felt like there was a page missing or I’d skipped a panel, but overall it moved along pretty well. I had to remind myself several times that this wasn’t really written for my age group, which helped. The artwork is pretty cool, handling the feline protagonists well and keeping them firmly on four legs instead of humanizing them by putting them upright and giving them thumbs.

If I were still in the market for some prime storytime reading material, this would have been a great little diversion from Dr Seuss or the Berenstein Bears. 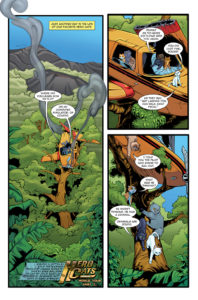 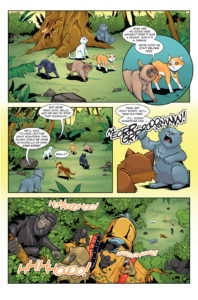 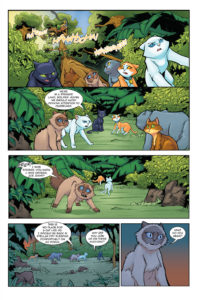 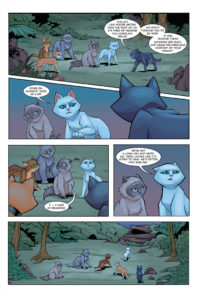 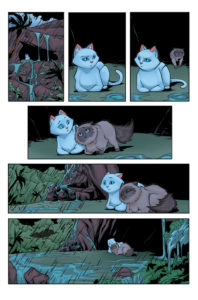 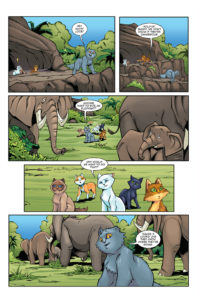