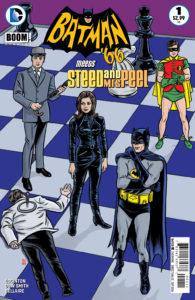 As Bruce Wayne shows the beautiful head of a UK electronics company the sights of Gotham, they are interrupted by the felonious feline Catwoman! Unwilling to leave Miss Michaela Gough unprotected, Bruce resigns himself to the fact that Batman cannot save the day. But some new players have arrived in town – though even as the lovely, catsuit-clad Mrs. Peel and her comrade John Steed take control of the situation, nefarious plots continue apace!

Fans of the uber popular Batman ’66 series, based as closely as is humanly possible on the television series of the sixties, should find it impossible to turn away from this one. Fans of the off the wall sixties spy adventure series, The Avengers (not the Marvel supergroup of the same name…), will be crawling the bodies of the Batman fans to get to this. Fans of Austin Powers will be sorely disappointed, because he’s probably the only retro sixties icon that isn’t likely to appear in this series. Or is he, baby?

Millionaire playboy Bruce Wayne is out on the town with the beautiful electronics tycoon Michaela Gough, and he’s working to impress. The two are taking in an exhibit of rare gemstones, and getting to know each other a little better as the heads of their respective companies, Wayne Enterprises and United Automation, as they head into a working relationship. The witty banter is tragically interrupted when Catwoman hits the scene, looking to get her claws on the White Star Diamond, the largest gemstone in the world. Of course, foppish Bruce Wayne isn’t particularly suited to taking out the feline felon and her alley cats, but he is able to trigger an alert on his emergency wrist radio. With Robin and sometimes Batman stand-in Alfred advised of the crime in progress, they take to the streets. But can they get there in time?

The good news, they won’t need to. Enter Steed and Mrs. Peel, British spies extraordinaire, to take control of the scene and save the day! The diamond is safe, and Catwoman is taken into custody. Everyone wins, right?

It’s never going to be that simple, but if this 10 page digital comic is any indication it’s going to be a blast. Before I get into anything else, I was impressed by the artwork on this book. Matthew Dow Smith has done his homework, without a doubt. The layouts, the character designs, every visual bit of this book is spot on. The characters all look exactly like their live action counterparts, and the backgrounds could very easily be cheap cardboard cutout sets from the grooviest decade of TV history. I’m only waiting until we get to one of the villains’ hideouts… if the scene isn’t tilted onto a ridiculous angle to show just how skewed evil doers really are, I’m going to be very sad.

Next up, the writing. It wouldn’t surprise me to find out that Ian Edginton was working off of actual scripts from both shows. As I read the dialogue, my brain was translating the written word into the silky smooth baritone of Adam West, and the hyper-active rapid fire voice of Burt Ward’s Robin. Given that Steed and Peel show up later in the ten page issue, it was a little tougher to get a handle on them, but their own brand of banter and wit looks to maintain the levels of excellence. One of the great moments from this issue was when Mrs. Peel and Catwoman compliment each other on their outfits…

I’m looking forward to the rest of this series, and seeing how the character dynamics expand and develop. Both shows remain landmarks in their respective television genres, but have enough similarity in tone to make this a pretty great crossover.

Fun Fact: Diana Rigg, the actress who played Emma Peel in the Avengers television series, can still be seen blazing away on the screen… She’s playing Olenna Tyrell, scheming matriarchal mastermind of the Tyrell family on HBO’s Game of Thrones.