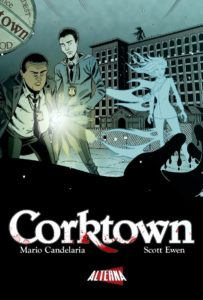 The worst is far from over after a Detroit detective falls victim to a vampire’s bite. With her soul trapped in limbo and her reanimated corpse wreaking havoc, Torrie must find a way to help her partners stop the carnage before more lives are taken.
———-

Torrie was a Detroit police detective, until she was killed in a brutal attack. Now, her partner Williams is following a trail of bodies, all matching the circumstances around Torrie’s death. Doubly determined to put the pieces of the puzzle together, Williams is having a tough time reconciling the evidence. At first glance, the killings have all the trademarks of savage animal attacks. As more bodies mount up, however, that first glance turns out to be a little skewed. The most glaring discrepancy is when the latest victim shows a bite matching that of a human jaw and teeth. Thankfully, Williams isn’t completely alone in his investigation. He’s got the best and brightest Detroit P.D. has to offer, but even in all their numbers the police aren’t equipped to deal with the truth of these murders. What Williams needs is another form of intervention, and that help comes in the form of Torrie herself.

Let me say right now, Corktown is not just another vampire story… It’s a retooling of the myths we know, or think we know, that presents itself as something completely new. First and foremost, yes Torrie was killed by a vampire, and yes her body did rise up to assume its new place in the food chain as a newly created creature of the night. Where the story takes a new spin is in Torrie’s continued existence as a disembodied spirit, trapped between this world and the next, and the torment this causes her. She’s forced to watch as her body, a fully animated undead thing, rises up to kill over and over. As a cop, Torrie is determined to stop the killing spree any way she can. Her added incentive as a stranded spirit, trying to come to grips with the fact that it’s her body doing the killing, serves up an interesting twist on the story’s conflict.

Much of what we need to know is presented as Torrie tries to help another victim of a vampire attack, Miles, this one actually perpetrated by her… by Vampire Torrie. It isn’t specifically stated in the text of the story, but I got the impression that this provided her with another level of responsibility, that she felt she had to deal with this personally. As she goes about helping the latest victim to deal with his own newly risen corpse, the ground rules are laid out for us. First, spirits can’t speak to the living. Also, vampires can’t see the spirits either, but they can sense their presence. Next,the spirit needs to avoid direct contact with his or her vampiric body, something we’re led to believe Torrie has already tried, or experience pain beyond measure. Most interestingly, Spirit Torrie is able to inhabit and possess a living body, using it to fight and destroy the newly risen vampire. As the vampire falls for the last time, Miles’s spirit is pulled away from this world and into the next, leaving Torrie behind to continue her quest.

Reading the opening issue to this very interesting and original story, I got a lot of subtext. I have no idea if this was just my own personalized experience being projected into the comic, or if it was a deliberate act of Corktown’s creators. In the end I have to ask if that really matters? For me, Corktown was a great new spin on an old story, and Torrie is represented as a great character, tortured by her dual existence. Torrie’s conflict was illustrated perfectly in one scene where she faces her vampiric corpse. While the vampire can’t see her, it is aware of her presence. When Torrie cries out, “Why won’t you just fucking die?”, we’re shown that the vampire is also aware of Torrie’s suffering as it smiles before disappearing into the night.

The writing by Mario Candelaria apparently does a good job of conveying an idea without beating it over the head. The reader is given the relevant information they need, but not so much as to lay the entire story experience out by the numbers. We’re still given the opportunity to read into the subtext, to inject our own ideas into the narrative, making it more of a personal experience. Similarly the black and white artwork by Scott Ewen is starkly suited to the story’s narrative, giving us nothing but sharp contrasts with which to take in this version of Detroit. Ewen’s character design is well done, a fact highlighted in the scene where Torrie the Spirit shouts her frustration to Torrie the Vampire. We’re shown the two faces superimposed over each other in split panels. While the two are superficially identical, the differences are pretty obvious, particularly when the vampire’s evil grin is compared to Torrie’s haunted expression.

The creative team, and the people at Alterna, have put out a much more interesting spin on the vampire story. Vampire Torrie isn’t tormented over her thirst for blood, she seems to revel in it. While Spirit Torrie does feel responsibility for the actions of the vampire, she certainly doesn’t yearn to return to the mortal coil. She really seems over the whole thing and just wants to move on. If for no other reason than the originality of the premise, Corktown would be a great addition to any pull list… 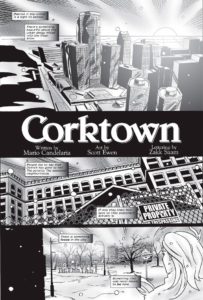 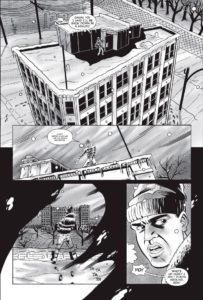 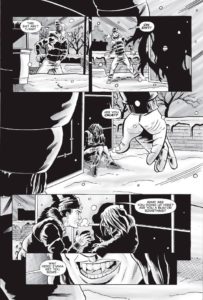