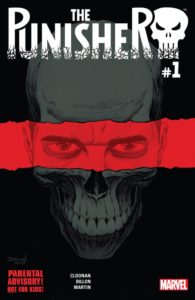 Frank Castle was a decorated Marine, and upstanding citizen, and a family man. Then his family was taken from him when they were accidentally killed in a brutal mob hit. From that day, he became a force of cold, calculated retribution and vigilantism. Frank Castle died with his family. Now, there is only… The Punisher.
———-

DEA Agent Ortiz is about to make the bust of her career… She’s been doing the homework, crossing t’s and dotting i’s in preparation for a major break in her hunt of criminal boss known only as Condor. No mere thug, Condor started his career as a mercenary, and has moved up from there. Currently, he’s the sole supplier for a narcotic called EMT, a drug that works as a potent performance enhancer… get your head right, not THAT kind of performance enhancer… that can turn anyone into a killing machine with one hit. Ortiz’s team has been briefed, and has been told to get a good night’s sleep because they’re going in first thing in the morning.

Condor’s Lieutenant, Face, is ruthless and efficient, and he’s also done his homework. He knows that the DEA is closing in and ready to pounce, but the latest and largest shipment of EMT to date has to get out. On site to make sure that happens, he’s reinforced the importance of this fact, inspiring fear in everyone under him… Everyone except for Olaf, who’s been a part of Condor’s operation going all the way back to his mercenary days. Olaf isn’t a young man anymore, but he embraces the philosophy “age and guile beats youth and vigor” with a hard stare and his .45 1911.

A third party is just as interested in Condor’s operation, and has followed it back to this shipment. This party is just as dedicated to his craft as Ortiz’s DEA team, and every bit as brutally efficient as Face and Olaf. His methods may not be grounded in due process, but he doesn’t need numbers on his side or chemical enhancements in his system. All he needs is the determination to bring retribution to those who would do harm to the innocent.

The mission statement here at thePullbox, if we were ambitious enough to actually have a mission statement, is to shine a little bit of a light on smaller publishers and independent comics. I embrace that role whole-heartedly, and do what little I can to spread the word, but every once in a while I gotta weigh in on books at the other end of the pool. This newly numbered run on The Punisher turned out to be one of those books.

I picked it up for a couple reasons. First, having just watched the second season of Daredevil (Netflix, go watch it now), I wanted to take a look at what Marvel was doing with the character to reward the immense fan response of Jon Bernthal’s portrayal of the iconic and uber broody Frank Castle. Second, the name of Steve Dillon pretty much jumped out of the book to grab my attention and guarantee that I came out of the deal a few bucks poorer. That was why I picked up the book, but I read the book twice because it was just that damn cool…

This isn’t a series reboot. Frank Castle’s tenure as The Punisher has his name said only in whispers, not like the boogeyman, but how the boogeyman might talk about whoever scares the hell out of him. The name is as much a weapon as the plethora of large caliber weapons he has at his disposal. In that regard, he’s been very well established as the much angrier and less squeamish version of the Batman of the Marvel Universe.

The question will be how writer Becky Cloonan will handle the biggest challenge faced by everyone who’s worked on the title. In all stories, there is a protagonist, the hero, the one with whom the reader can find some kind of connection. For that connection to exist, there has to be some sort of inner turmoil in our hero, a questioning or uncertainty behind his or her actions that humanizes them. Superman isn’t a book about an all-powerful being flying around and smashing evil doers, it’s about an outsider seeking a place to belong. The Walking Dead isn’t really about the zombies or the people who put ‘em down, it’s about the things people faced with extreme adversity will do to survive. Without those things, a title loses depth, and over time the novelty of a thing will wear off and the title loses readers.

Love him or hate him, you’ve gotta admit that the Punisher has got to be about the least conflicted, most self-assured character in the Marvel Universe. He sees a problem that has to be handled, and he handles it. No questions, no doubts, just the decision made to resolve an issue in such a way that there’s no chance for that particular problem to resurface. End of story. To quote Frank’s latest on-screen incarnation, “You hit ‘em, they get back up. I put ‘em down, they stay down.”

So what’s this story going to be about? In this first issue of the latest run, the impression I got was that at its core it isn’t going to be about Frank Castle. As was stated a couple times in the issue, Frank Castle is dead. All that’s left is the Punisher, and he isn’t a person… he’s the Spirit of Vengeance (sorry, Ghost Rider, the pattern is set), fury and carnage personified. There’s no threatening, no bargaining, no pleading to be done. When the Punisher comes for you with bad intentions, you can only fight and die, or run and die tired.

I think I’d have to say that my hopes are pretty high for this run. The scene that really set the tone for me is when DEA Agent Ortiz is talking to a member of her team about the necessity of all the paperwork involved in police work. She tells him, “The price of righteousness is paperwork.” She acknowledges that the criminal element holds every advantage because they don’t have as many rules to follow, no restrictions holding them back from action. Conversely, law enforcement is largely reactionary, and by definition one step behind and working hard to catch up.

Ortiz goes on to make the analogy that it’s like in fishing… You have to learn patience, you have to be able to stay the course and take the steps to success without shortcuts. “Sure, you could catch more fish with dynamite, but that’s a good way to get yourself blown to &$%#.” The pair are walking past a doorway and as she mentions the dynamite, there, lurking in the shadows and listening unseen to every word said, is our first glimpse of He Who Makes the Boogeyman Crap His Pants.

As may be apparent by now, I think Cloonan’s writing is spot on for this book. She’s establishing the Punisher as a myth in the underworld, as the specter of Death himself, more than as just a man in a costume (which in this case looks like an UnderArmor t-shirt bearing the iconic skull, a pair of cargo pants, and combat boots… and guns, lots of guns). All of this groundwork is bolstered by the always great work of Steve Dillon, who’s ability to handle the sheer violence of his action scenes with the mastery of John Woo. Every bullet fired, every blow dealt, and at one point with every swing of a cinder block carries visceral, bone crunching impact.

Now, get out there and buy an independent comic book… and after that, pick up this issue of The Punisher. It doesn’t make you a sellout or a bad person, I promise. There’s always room on the mainstream publisher bandwagon for more. 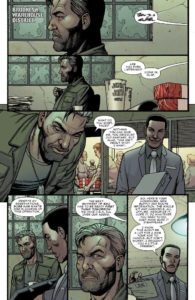 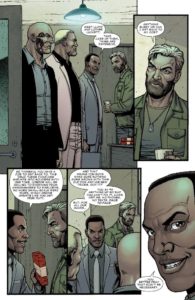 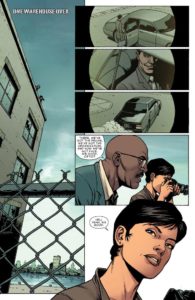