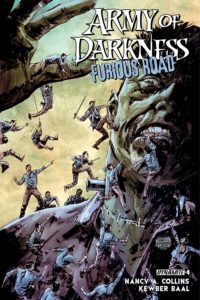 Ain’t no mission like a suicide mission, ’cause a suicide mission don’t stop! Prepare yourself for non-stop death, destruction, madness, and mayhem as Ash leads the Frankenstein Monster, the Daughter of Dracula, and a werewolf biker gang against the assembled might of the Army of Darkness. Can they get the witch, Heckuba, to the church on time to send the Deadites back to the hell they crawled from, or is the world doomed to be crushed under the heel of Ash’s evil demon-twin, The General?
———-

In a world full of deadites, the few humans who remain are meat for the buffet… Unless Ash can save the day.

Working with the most unlikely group of heroes you’ll ever see, including a werewolf biker gang, Michael (aka Frankenstein’s “Monster”), a priest, a witch, a living gargoyle, and Dracula’s daughter, Ash is on a last ditch mission to save the world. The only hope humanity has left is that they get the Necronomicon Ex Mortis to sanctified ground, perform an ancient ritual, and banish the invading deadites from the world for good. In their way is an army of said deadites, led by none other than Ash’s evil deadite twin, the General. With the Necronomicon out in the open, the General will do whatever it takes, sacrifice as many pawns as he has to, in order ensure that the deadites will wipe out what’s left of humanity and rule the world.

Furious Road is one of the more entertaining entries in Dynamite’s ongoing dips into the world of Sam Raimi’s Army of Darkness. With this bizarre list of characters, most of whom can’t stand Ash (even the monsters think he’s a horrible person), the quips and retorts fly off the page. Once the action starts, it doesn’t let up… appropriate, given the namesake this post-apocalyptic tale of terror has taken as its own. Mad Max himself (Gibson or Hardy, take your pick) would have a tough time keeping up with this convoy of misfits, hellions, and ne’er-do-wells.

The problem these mismatched heroes face isn’t so much getting the book to holy ground… It’s going to be dealing with what they find when they get there. The survivors, at least. The ones who don’t live to see the cathedral will mostly be worrying about deadite stuff: killing people, eating people, laughing manically, and the drawbacks of decomposition.

I’m a fan of this hyperactive piece of a mashup. If you were to look at pretty much any example of post-apocalyptic storytelling, the most important element is survival. In any world ending scenario, you’re not going to have any control whatsoever over who lives to see the next day. What you’d be left with is a hardened, often ruthless and most definitely dangerous group of people. In any cross section of those people, folks who “don’t play well with others” is going to be the rule rather than the exception, so presenting them in a manner that forces them into a cohesive group is where the story is. Kinetic action and over the top violence are just the sweet creamy topping on the chaotic cake.

The fact that Nancy Collins seems to have a pretty good handle on an oddball and much loved character like Ash is yet another bonus for the fans. So if you count yourself one of us, and you’re looking for a fix to fill the need for more of S-Mart’s favorite son, this is a fine way to pass the time until season two of the show hits Starz.

Hail to the King, baby…