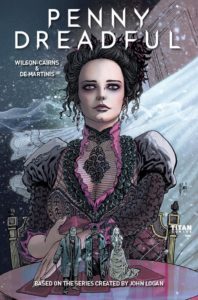 The hit TV series is presented in comics for the first time! This prequel reveals the terrifying events that led Vanessa to try and find her missing childhood friend, Mina Harker, and exposes the true nature of the vampiric monsters infesting Victorian London. Beautifully realized by Louie De Martinis, and written by the scriptwriters of the hit show!
———-

“Penny Dreadful” is a term given to a type of serial story, published weekly and extolling the adventures of detectives, criminals, and supernatural creatures. Printed on cheap wood pulp paper, these novellas were aimed at working class males in 19th century England. The fictional tales were over the top, sensationalized retellings of local legends, as well as original works based on true life figures.

Two years ago, Showtime and Sky joined forces to bring some of these stories to intense and bizarre life. The series focused on several well-known figures of literature born in the Victorian era. Such figures as Mina Harker, Victor Frankenstein, and Dorian Gray have stretched their legs for the series and benefitted from the experience. Coming up into its third season, the Penny Dreadful television series would be high on my list of recommended viewing for anyone interested in something classic but with a twist. Now, Titan Comics has taken on the task of filling in some of the blanks, going back to the events that occurred before the television series.

Mina Harker, beloved wife of Jonathan Harker, daughter to Sir Malcolm Murray, has been taken by a vampire lord referred to as The Master (but we know who they really mean…). Bound by the blood that sustains her, Mina has been enslaved by the monster, only able to reach out psychically to her oldest friend Vanessa Ives to cry for help. In this first issue, we see that there is some bad blood between Vanessa and Sir Malcolm, but not the source of the animosity. Readers of the comic alone also might not be aware that Vanessa has a very dark past herself, one that could very well have placed her dearest friend in harm’s way.

Issue one has just about enough time to bring Sir Malcolm and Ms. Ives together as they begin their quest to find and rescue Mina from the evil that’s consuming her literally and figuratively. Readers new to the world of Penny Dreadful are given all the information they need to start getting acquainted with these painstakingly complex characters. You’re going to need the time taken to set the characters up, because if the show is any indication, we could end up with a LOT of people to keep track of. Established fans of the show will get a little bit of a refresher, but not so much repetition that the story bogs down. The art work beautifully illustrates what is doomed to be a dark and bloody world, with splashes of red being the brightest colors on the palette.

As someone who’s watched every episode of the series, and is anxiously waiting to see what comes next in season three, I can tell you that this is a very complex, character driven story. Everyone depicted is deeply layered, flawed beyond belief, and most assuredly doomed to a dark fate. If you’re looking for a happy ending to these twisted tales, you’re going to want to look somewhere else. Much like another popular cable television dark fantasy series you may have heard of, dedicated viewers should start to get worried whenever anyone looks like they may be experiencing anything even remotely resembling “joy”.

For anyone who enjoys Gothic tales that cover every dark corner of the human, and inhuman, condition, Penny Dreadful is a pretty good bet. It’s a good time to get started, with the third season kicking off soon… so what are you waiting for?