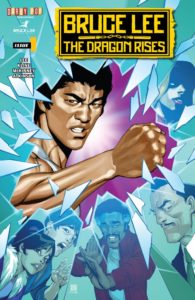 From DARBY POP and the BRUCE LEE FOUNDATION! Bruce Lee never died. And he hasn’t aged. But, he has no idea who he is, what’s happened in the world in the past 40+ years, or why so many “thugs” want a piece of him. With the help of a fly BFF from the ’70s – Joe Toomey, P.I. – and a pair of precocious Teens, Bruce will piece together a mystery more insidious than ever imagined, and find himself forced to do battle with both an enigmatic Villain and his very own conscience. In other words, the Dragon rises… and “walks on” once more!
———-

Bakersfield, California. July, 2012… the Year of the Dragon. Exterior shot, high angle, zooming in on a secured warehouse. Inside, things look pretty normal as security guards and other assorted staff go about their duties. Things start to get interesting when an earthquake hits as the focus remains on a large, strange cube with tubes and cables connecting it to unknown machinery.

In the next scene, an Asian man, looking very fit if slightly disheveled in a security guard uniform that obviously isn’t his. He seems confused by the world around him, unable to comprehend some of the current trends or technology. At one point he asks someone talking on their cell phone why they’re talking into a transistor radio…

Eventually, the lost man’s wanderings bring him to “Geerlings Martial Arts Studio” (not fooling anyone… it all looks very much like “Master Ken” and his Amerido-te school). The sensei is currently (sarcastic quotation marks) “teaching” a class. In reality, we have the stereotypical ape with a mullet using his status and questionable skills to bully a room full of kids. Our mysterious man with no name… for simplicity’s sake, let’s just call him, oh I don’t know, off the top of my head we’ll go with Bruce… takes offense at this treatment of the students, and he intervenes with a surprisingly advanced skillset. Master Ken (okay, he’s not really Master Ken, but might as well be… only thing missing was a gi with cut off sleeves) kicks the kids out of his dojo and tells them to take “Paul Blart” (Bruce is wearing a security guard uniform, remember?) with them.

Now introductions come… brother and sister Jax and Wren are now faced with a man who’s helped them, is obviously capable and skilled, but has no idea of who or where he is. The only clue they have is the name “Joe Toomey” stamped on his underwear. One phone call later, the real Joe Toomey, close friend and former student of the famed Bruce Lee arrives. Hey! A friend of Bruce Lee’s… and our lost and mysteriously skilled in martial arts who we’ve casually nicknamed “Bruce”… coincidence? Absolutely not!

This strange man is, in fact, the one and only Bruce Lee, creator of Jeet Kune Do and master of the “one inch punch”. He’d been held in suspended animation since his supposed death in 1973, for reasons and by forces as yet unknown. Having no memories of who he is, or was, Bruce is caught in the middle of a grand conspiracy. It will take all of his legendary skills, and the help of Joe Toomes, Jax, and Wren to figure it all out.

I have no doubt that there will be naysayers out there, overjoyed at finding something at which they can take offense and declare themselves outraged at this sullying of Bruce Lee’s memory. All I can say is, relax. Take a breath. Get over yourself. As the story is created and co-written by Shannon Lee, Bruce’s daughter and head of Bruce Lee Enterprises, I think it should be safe to assume that this is a labor of love. Bruce Lee’s memory is still strong in public memory, outlasting most of his contemporaries of the time, and this book looks to be a tribute to his legacy.

And an entertaining tribute it is, because Rise of the Dragon is a hoot! For a family friendly book, the writing is intelligent enough to narrowly avoid cheeseball status. There’s wit aplenty as Bruce goes about trying to discover who he is, and who was behind him being frozen and stored away for four decades. The jokes aren’t laid on too thick, either, keeping the story from being dropped into total goofball status. Basically, this is Bruce Lee, given the Jackie Chan Adventures treatment, and while it may come across a little rushed in some aspects (Bruce’s old friend Joe is pretty accepting of the whole thing, shrugging it off in “just like old times” kind of attitude), it still hits the marks it needs to. The story has to keep on moving, and to be honest I don’t really need to sit through all of the explanations and denials… We get right down to it, and for that I’m thankful.

Where we’re going to end up is still anyone’s guess. What nefarious reasons do Mr. Shen and his shadowy organization have for storing the Dragon all these years? For that matter, what do their plans entail for the warehouse stacked floor to ceiling with countless other people frozen in blocks of ice? Who is the mysterious yet threatening blonde woman to whom Mr. Shen shows such deference and fear?

Questions, questions, and more questions. If we want the answers to these, and more, we’re going to have to tune in to the next issue of Bruce Lee: Rise of the Dragon. So sit back and relax… by like water, my friend. 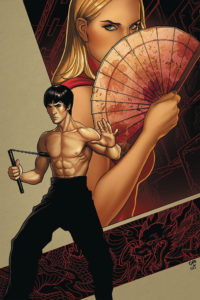 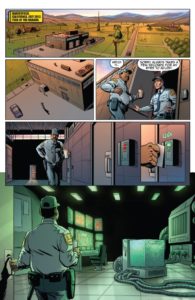 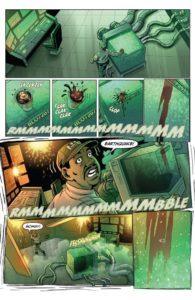 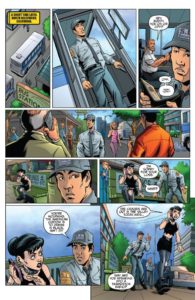 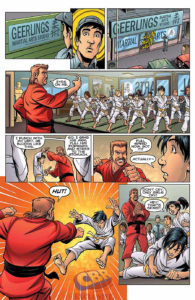