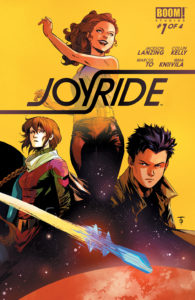 In the future, Earth sucks. The stars have been blocked out for so long that people have forgotten there was anything else besides the dumb World Government Alliance watching over them, training children to join the militarized Allied Youth and eliminating all resistance with a giant ray gun. Uma Akkolyte is a girl who shoots first and leaps before she looks, and when she gets a strange message from outside the barricades of SafeSky, she jacks a spaceship and punches through the stratosphere with an unlikely crew of teens who are totally not ready for what they’re about to find.
———-

“One world. One government. One destiny.”

This is the mantra of society on Earth, far into a future when paranoia has become as deeply rooted in our collective psyche as… well, pretty much as it is now. The media makes regular reports of thwarted alien incursions, threats against “SafeSky” (the immense steel shell that encompasses the Earth and moon), and the presence of malcontents referred to as “aberrations” living among us. All under the banner of the benevolent and glorious World Government Alliance.

Given the current climate of political and social mistrust in virtually every facet of our lives, it’s no surprise that the theme of “Big Brother is watching” would make itself felt. You know the kind of story I’m talking about? Where people are oppressed by a dark and brooding, all-encompassing government, where concepts like hope and individual thought are not merely discouraged but repressed by force. The kind of story where the people are beaten down to the point where looking up invokes the fear of retribution from on high. In those stories, there invariably comes someone, a hero, who will fight back against the Machine with the determination of a religious martyr, who will take on the system no matter the consequences. Who takes it upon him/herself (hirself?) to step forward into the dark, to part the curtain that’s been pulled over the eyes of the populace, and stick a calloused thumb right in the eye of the Orwellian nightmare.

Jeeze, that’s depressing. Thank the stars that this isn’t that story…

This is the story of Uma Akkolyte, a dreamer, a wanderer (or at least someone who really WANTS to wander), someone who’s biggest fear is the ever present specter of boredom. Having met up with a young fellow named Dewydd (“D” for short…), who also happens to be something of a celebrity in this World Order, Uma has come up with the perfect plan. Her biggest desire is to see the stars that have been blocked out by the SafeSky for as long as anyone can remember, the stars she’s read about in books left behind by her parents. After making radio contact with a mysterious alien from beyond SafeSky, Uma hatches the plan that will get her out into the great Beyond.

With D’s help, Uma is going to make her way from the planet’s surface to the moon. From there they’ll get outside of the lunar installation and clear of the SafeSky, where all that’s left to do is hop a ride on a starship and take off for whatever might be out there waiting for them. Along for the ride will be the very reluctant Private First Class Catrin, drinker of the metaphorical Kool-Aid, convinced that every evil she’s been told about will befall them once they step outside of the loving embrace of SafeSky. All Uma and her dysfunctional band have to do is make it past unbeatable security, from under the ever watchful eye of the one world order, to the dark side of the moon, and onto an alien spaceship.

This story isn’t about life under an oppressive and paranoid regime. It’s full of curiosity and hope for something… anything… better “out there”. Uma’s journey isn’t one prompted by tragedy or despair. She just wants to see it all, everything she’d read about, everything she’s grown up being told is Evil. If it’s new, it’s on her bucket list, and like a force of nature anyone close to her is going to be swept along for the ride like it or not. With some interesting characters written by Jackons Lanzing and Collin Kelly, and very cool sci fi artwork from Marcus To, what we have here is a book with a much lighter tone in an industry almost glutted on the “dark and broody”. Personally, as much as I think Uma would drive me nuts in real life, in this comic it all works very well. I’ll be disappointed if this light and cheery tone of the book gets lost to future angst along its four issue run. 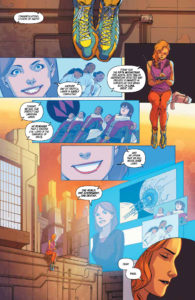 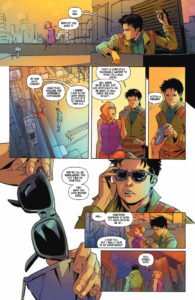 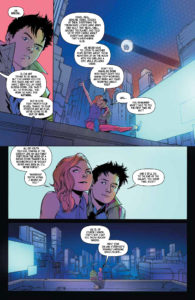 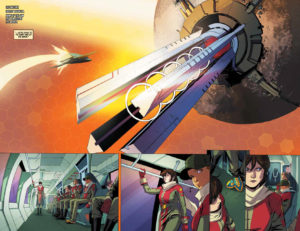 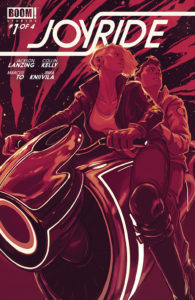 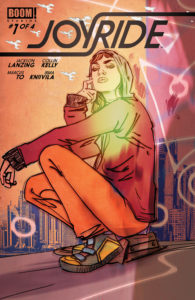