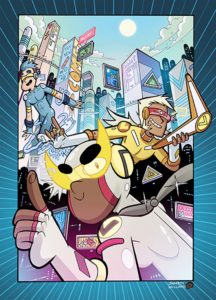 HYPER FORCE NEO, from SUPER PRO K.O.! creator Jarrett Williams takes readers along on the adventures of Dean Masters, a 9th grader tasked with leading a group of tech-savvy teens called Hyper Force Neo. Their Mission? Save New Sigma City and their high-school from the sinister, intergalactic vagabonds known as the Dark Edge. With the use of their Hype Suits, Neo Keys, High-tech weaponry, and over-sized Neo Mechs, Dean and his friends just may get the job done.

Welcome to New Sigma City, a glowing example of progress and innovation. Some of the sites to visit are New Sigma High School (Home of the Chargers!), the Sigma City Glow Rail (operating 24/7, admission only 25 cents each way!), and the RetroBit Arcade (Over 50 games to play and the best pizza in town!). If you’re new to the city, no worries… the citizens are friendly, upbeat, and ready to show you around.

Take young Dean Masters, for example. Dean is your average teenager, with average teenage aspirations. He’s also very upbeat, full of positive energy and optimism. Hold on… that’s actually not particularly average, at least if we’re going by popular culture. Teens are supposed to be all angsty and riddled with self-doubt, desperate to be accepted and anxious to simultaneously fly under the radar while excelling at the hormonally driven social maze that is adolescence. Y’know something? I think I like things in this New Sigma City better.

Sure, it’s got its problems. Take, for instance, the first few pages of the book where we see a bizarre alien life form going about his business of concealing strange crystals in strategic spots. Or just a couple pages after that, the battle being waged between two giant mechs. But, much like the narrative of this story, I’m getting a little ahead of things and need to hit the pause button for a little flashback.

Okay, so backing up a couple days, we’re introduced to Dean Masters… I mean, I mentioned him already, but we did the whole flashback thing (insert flashback sound effect here), so we’re doing it again. Anyway, Dean takes things pretty much in stride, determined to do well in school and get on to bigger and better things. He’s outgoing and friendly, taking the new kid in school, Neil Tran, under his wing to help him get acclimated. The two boys bond over their mutual ambition to make the school’s track team, their mutual love of video games, and urge to completely engorge themselves on pizza.

Now, lest you get the impression that this is going to be a painfully boring comic book with no conflict whatsoever, take heart… There is in fact evil afoot in New Sigma City. The sinister organization Dark Edge, led by not particularly evil-named Frills, has ambitions of its own. Frills has had her lackeys busy placing spy crystals all over the city, giving her eyes and ears everywhere. Her sinister intentions take her to the New Sigma City High School’s 91st annual community fair, where she poses as harmless student as she goes about her business…

Meanwhile, Dean has run across a harmless looking little droid-pod-looking fella named Ion, who within seconds after meeting Dean judges him to be a “Pure Spirit”, with a “Kind Heart”, and “Optimistic”. All things I could’ve told him, but I guess it’s fair to point out that Ion hadn’t had the benefit of reading Dean’s backstory up to this point. Anyway, Ion decides that Dean is worthy to be the guardian of Silver Neo Key, and to bear the great power (and responsibility) of The Silver Hype! Evil doesn’t stand a chance!

All in all, this comic was a blast. The creative energy of Jarrett Williams is off the charts, and bleeds through onto every page. I kid you not, I had a sugar rush after about the first ten pages like I’d mainlined two back to back Jolt Colas. The artwork is detailed, like actually pay attention to every panel because when you think you’ve seen everything there is to see on the page you find out there’s about five other things detailed. Every action, every character, every location comes with its own caption and description. If you’re an old fart like me, you’re likely to need a timeout when you’ve finished reading.

I haven’t even gotten to the action yet. Like a rollercoaster than hits you with a corkscrew right after a double loop, the initial meeting between Frills and the Silver Hype jumps right into a battle that had me thinking of Scott Pilgrim, right up to and including little health point meters above the characters’ heads. When the fight starts, it’s a beat down of epic (and slightly comical) proportions, complete with labeled power-attacks like “TRI BEATDOWN COMBO!”, the “X-JUGGLE”, and the snicker inducing but still impressive looking “STAR PUNCHIE!” Then, when you think it just can’t possibly pile on anymore manga-inspired insanity, the combatants activate their respective Neo Keys and go into Super Mecha Battle Mode!

Which now brings us full circle, flashback over, back to the beginning of the book. Did I type a lot? It really feels like I’ve covered a lot. My take on it? It is absolutely not going to be for everyone, particularly those of us who are maybe a little settled into the normal Marvel/DC/Image style of comic book storytelling. However, with that said, if you’re interested in something completely off the rails and left of center, maybe something to read with the younger offspring, or if you’re just looking for something to get your blood sugar up without downing a Snickers bar, I think you could do a lot worse than Hyper Force Neo. 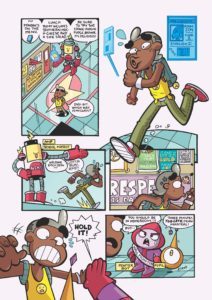 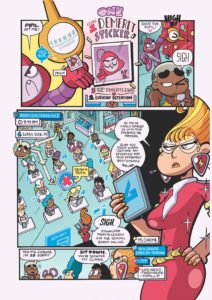 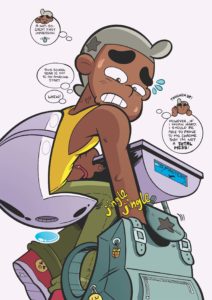 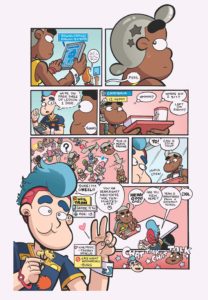 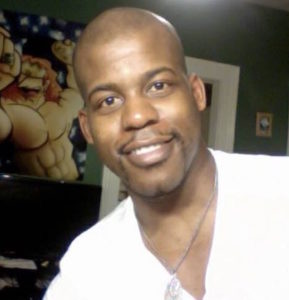