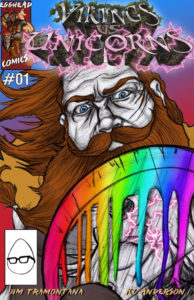 You’ve heard of alternate histories? Well Vikings vs. Unicorns is an alternate mythology, recasting everyone’s favorite one-horned mythical icon of cuteness as a feral nightmare, endowed with immense powers and bent on destroying humanity. They are pitted against one of history’s traditional villains, the Vikings, who are recast as humanity’s grimly determined saviors. A whole lot of rainbow-colored blood is spattered across its opening pages and the fun just keeps raging on from there!
———-

Come, friends, hoist yon tankard and join me in the retelling of a tale not fit for sober ears. It’s a harrowing tale of bone chilling evil and deeds most foul. It’s also a story of epic heroism, of bold men doing bold things and… um… saying bold words on a quest for revenge. Join the mighty Hord Hjorvanardson, brave Valanger Skefilson and his son Nils, and mystic Erlend Thorfinnsson while they hunt that beast most foul…….. Sprinkles the Impaler!

Wait, where you goin’? Come on, I’m just getting to the good stuff here, sit back down. Okay, look… You and I both know that when you read the title of the book, Vikings vs Unicorns, this wasn’t going to be a straight up serious review, right? What we have here is a comic that reaches for the outrageous and the extremes, and manages to deliver on both counts. Jim Tramontana lays out a stark world in which life is cheap, Vikings are badass, and unicorns are jerks.

Our story follows Hord, Valanger, Nils, and Erlend on their hunt for the evil beast, Sprinkles. The prize doesn’t come easily, and men are lost along the way, but in the end justice is done and in a splash of rainbow blood (cuz unicorns bleed rainbows, of course) Sprinkles is brought down. Erlend the “kickass mage” performs a rite by which the unicorn’s horn is removed, and the troupe carries on about their business. What business, you ask? The Ditch Witch of Keflavik has placed a bounty on the vile horns, and our Viking heroes are determined to bring that money back to their village.

But what use could the Ditch Witch have for unicorn horns? What are the long term effects of exposure to unicorn blood? And what nefarious plans could the unicorns have in place? These are the questions we’re left with by the end of this inaugural issue. Well, these and “what’s next, ‘Carebears vs Ninjas’?”

Which I would totally want to read, by the way… Just sayin’.

What else can I say about this book? It’s a romp. A lark. A tongue in cheek spin that calls into question everything we ever thought we knew about unicorns. Are the works of Shakespeare going to be challenged in their status as great literary works? Absolutely not, but if you manage to get through this comic without a chuckle and a shake of the head, you have no soul. And hey, that’s okay too. 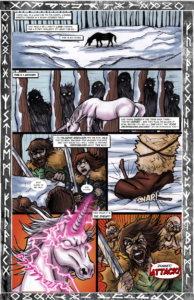 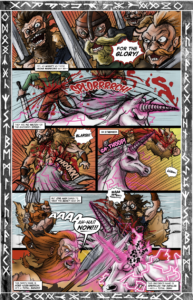 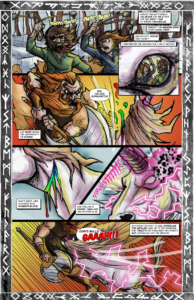