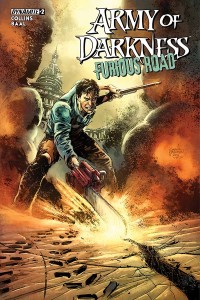 Twenty years from now, the world has fallen to the Deadite invasion. The remains of civilization is holed up in what was once the city of Lansing, Michigan – now renamed simply “Alive.” It is up to the Chosen One, the Keeper of the dread Necronomicon Ex Mortis, a.k.a. Ashley “Ash” Williams, and a rag-tag group of humans and monsters – including the Daughter of Dracula, Frankenstein’s Monster, and the witch Heckuba – to save humanity and send the Deadites back to Hell. But to do that, they must first battle their way past Ash’s evil twin, The General, and his demonic Army of Darkness with the help of a werewolf biker gang, Dracula and his Brides, and Ash’s custom Murder-Mobile.
———-

A priest, a nun, and Frankenstein’s monster walk into a shopping center…

No, this isn’t the beginning of an off-color joke, but rather the second issue of another installment in the Army of Darkness lexicon, courtesy of Dynamite Entertainment.

Issue 2 of Dynamite’s Furious Road picks up with a strange group of holocaust survivors in search of the Necronomicon. Among the group are a priest, the aforementioned nun, a witch, a werewolf, Frankenstein’s monster, a flying gargoyle, and the daughter of Dracula. Why is this unlikely crew looking for the book of the dead? To take it back to Alive, the largest sanctuary for the living, free of deadite influence. And being the keeper of the Book, Ash Williams once again lands smack in the middle of trouble, landing face first.

A great question would be, “Paul, what in the name of all that’s holy would bring a werewolf, a gargoyle, and a priest together in the first place?” Glad you asked, and thank you for participating! Alive is an open settlement for everyone who isn’t a deadite. That’s a very all-inclusive “everyone”, encompassing anyone willing to live by a few rules. Rule number one: Don’t be a deadite. Okay, that’s covered. Rule number two: Don’t kill or eat anyone who isn’t a deadite.

See? That’s not so tough… To be sure, the normal folk have to make a few adjustments as well. The bodies of the recently deceased are turned over to the werewolves once last goodbyes are made. Also, since Alive ironically includes none other than Dracula and his brides among its citizenry, there are mandatory blood drives to keep everyone fed and more or less happy. On the bright side, having a werewolf biker gang on your side when an army of deadites is clamoring to get over the city walls isn’t a bad thing at all.

Dynamite has brought the Army of Darkness saga well beyond the scope of the original films, and they’ve done it with style. Ash has rocked the boomstick alongside the likes of Darkman, Freddy Krueger, and Vampirella, none of whom appear in this particular series. Ash has been in space, and even faced up against the Marvel Zombies. With all of that in mind, and accounting for the immense and well-deserved popularity of Mad Max: Fury Road, it was only ever a matter of time before his grooviness faced a post-apocalyptic world overrun with deadites.

If anything I’ve said in the last few paragraphs sounds even the least bit interesting to you, I don’t see why we’re still sitting here talking… you should already be reading this book, and we should be high fiving each other over how awesome it is to be a geek right now. 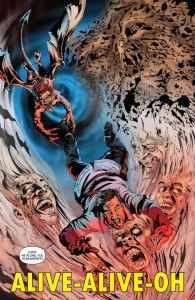 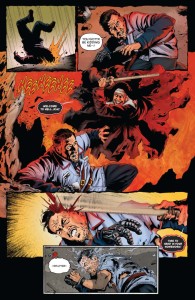 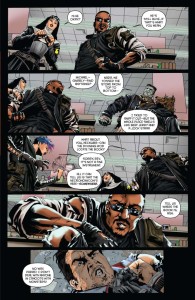 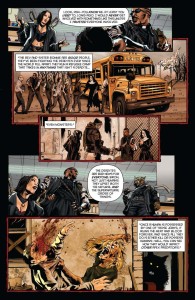 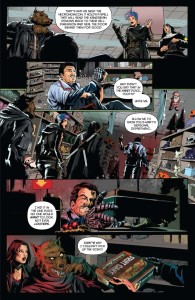