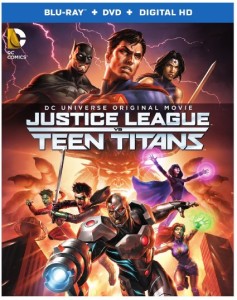 Check out the trailer!
Available through:
Amazon on demand, or get a disk copy here…
iTunes
VUDU

Frustrated and disillusioned about his work alongside the Justice League, Robin is forced into a new position with a younger super team, the Teen Titans. Readily welcomed aboard, he is immediately intrigued by the mysterious Raven and the unnatural force that looks over them- her father Trigon- a deceptive being powerful enough to destroy Metropolis by pitting the mighty Justice League against the Teen Titans. With loyalties on the line and lives in the balance, witness the super hero showdown that pits Superman, Batman, Wonder Woman, and Cyborg against the likes of Beast Boy, Starfire, Blue Beetle, and Nightwing. Only true teamwork will end the threat in this all-new DC Universe adventure!
———-

Meet Damien Wayne, son of Bruce Wayne. Son of the Batman. Grandson of R’as al Ghul. If you ever start to think that you’ve got problems with authority, that it’s tough living up to your family’s expectations, just think of what this kid has live with. Since taking his place at his father’s side as the new Robin, Damien has had… difficulty… adjusting. Trained to be a master assassin from the time he could walk and hold a sword, maybe in that order, his “kinder and gentler” role as a superhero is taking some getting used to. And so it is that when he steps out of the bounds and disobeys a direct order from Batman, Damien is relegated to what he considers to be a day camp.

Meet Raven. Her mother was a young and impressionable girl looking for deeper meaning. Naturally, she joins a cult and is offered up as part of a ceremony nobody really thought was going to work. But work it did, summoning an aspect of the demon Trigon. In time, Raven’s pregnant mother finds refuge and peace among the extra-dimensional mystics of Azarath, where she gives birth to a girl destined for “daddy issues” of epic proportions. Trigon tried to claim Raven as his own, to use her as a doorway out of his hellish dimension. He succeeded, momentarily, before Raven was able to trap him inside a crystal… hopefully for eternity… but not before Trigon laid waste to Azarath.

Of course, Trigon escapes from his prison, and of course he seeks out his daughter so that he can once again travel to new worlds ripe for conquest and destruction. But first, he needs a foot in the door. He sends his shadowy servants to seek out beings of immense power, to possess them and bend them to the will of Trigon. Of course, their sights are set firmly on the Justice League. Now it’s up to Damien, Raven, Starfire, Beast Boy, and Blue Beetle to stop Trigon’s plans, and prevent his puppets from triggering the End of Days. Cake? Not so much, considering that Trigon’s servants have taken control of Superman, Wonder Woman, the Flash, and Cyborg.

Some of the first comics I read with regularity were the Titans, during the run of George Perez and Marv Wolfman (1980-1996), long before the Cartoon Network series that brought them back into popularity. It was great to see that for this animated feature, Warner Bros. went with that classic lineup, and kept most of Raven’s backstory intact. Also included was the atmosphere of “family” among the Titans, the idea that behind the whole superhero gig this was a group of kids who needed a place to belong. A place to be kids without the pressure of being under the watchful eyes of the likes of Batman, Superman, and Wonder Woman.

So how is this newest addition to DC’s animated feature lineup? Pretty damn good, I think. While some of the tone might try a little too hard to show the “teen” part of “Teen Titans”, this is a pretty entertaining story with some really good writing. I’ll admit, Damien got on my nerves with his over-the-top “I’m better, smarter, and more serious than these children” shtick, but I’m pretty sure he’s supposed to, and he mellowed out enough to be tolerable in the end. There’s some great writing in here, with solid performances from Stuart Allan (Robin), Jake T. Austin (Blue Beetle), Raissa Farmiga (Raven), Brandon Soo Hoo (Beast Boy), and Kari Wahlgren (Starfire). There are some for real laugh out loud moments, particularly coming from Beast Boy and the Flash, and Raissa Farmiga does an excellent job of conveying the dark fate behind Raven’s character.

Also, wait for the first rallying cry of “Titans, go!” Seeing Starfire go full on “Sailor Moon” as she suits up was a little over the top, but I think that was the plan as Beast Boy and Blue Beetle go through their dramatic and uber cool power up cut scenes… Meanwhile Robin runs to the car to grab his sword only to realize that Starfire has the keys with a muttered “dammit”.

No mistake, while the title of this movie is “Justice League vs. Teen Titans”, this really comes across as a Teen Titans movie first and foremost. Hopefully, in the absence of more Young Justice (seriously, if you haven’t seen that series, check it out on Netflix and hope it gets picked up for a third season), DC and Warner Bros. will have enough success with this feature to get a green light on whispered plans for a Titans television series.

There are some adult themes and high end violence throughout the movie, so don’t go assuming that just because it’s a cartoon it’s going to be suitable for all ages. Do you due diligence as a parent and watch it first. Y’know, after the kids have gone to bed. Make some popcorn, too. They don’t have to know…