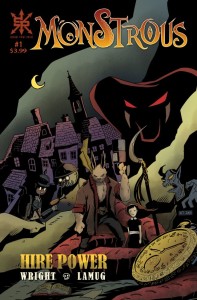 You’ve heard the story of Dr. Frankenstein and his monster before. You know
they tried to kill each other. But it didn’t work. Now, Frankenstein has built robots, his monster has built more monsters, and the world will never be the same. Monstrous tells the tales of everyday monsters, robots, and townspeople caught up in the changes sweeping across Europe in the wake of Dr. Frankenstein’s mad science. But even in this twisted landscape, our unconventional heroes—giant rabbit monsters, steam-powered cyborgs, and babysitting bank robbers—all try to live by their own code of honor. So fire up your steampunk rocket-sled and jump onboard!
———-

The setting of Monstrous is a steampunk inspired Bavaria. Doctor Victor Frankenstein is locked in an ongoing feud with his first creation, the monster. Over the years, the two have gone in different directions of study, Frankenstein into robotics and the Monster into the creation of monsters like himself… and yet very different. The Doctor has assembled an elite anti-monster police-robot squad dubbed “Franken Squad”. The Monster has fought back by creating a fearsome horde of his own, creatures and beings of great power.

But this story isn’t about them, or their war. Monstrous is a bizarre little story about a girl in search of revenge, a monster bunny looking to clear his name, and the unlikely friendship that grows out of their meeting.

Ilsa is looking for the creature who murdered her father, an evil snake monster named Kurt Venomtooth. Her search first takes her to the Franken Squad, but she finds that path is doomed to be a slow one. Turning her back on the Doctor and his mechanical minions (oh no, illicit alliteration… what next?), Ilsa crosses paths with Gruber, a rabbit on the run.

Wanted for murder, Gruber is trying to shake off his pursuers when he draws the attention of the young girl. When the two get together, Gruber finds himself helping Ilsa against his better judgment. What follows is a fast paced buddy comic that reads a bit like a twisted fairy tale, with art that reminded me of early Hellboy by Mike Mignola. None of this should work. At. All. But dammit, it does.

Ilsa’s tragic story isn’t pushed to the point of distracting us from the book, and… Well, come on, Gruber’s a giant rough and tough bunny rabbit with an attitude, a really big gun, and an aptitude for destruction. Where we get sucked in is through the relationship between the two of them. Ilsa is determined to get revenge for her father’s death, and she isn’t overly concerned about the distinction between that and “justice”. She claims to be perfectly okay with the evil Venomtooth being turned into a puddle of goo and shows little interest in bringing him before a court of any kind. Gruber gets dragged along with Ilsa through a series of missteps, and finds himself concerned with what’s going to happen to the youngster, both in the short and the long term, if she succeeds.

I enjoy a good comic that steps outside of the normal creative comfort zone, and Monstrous by Greg Wright and Ken Lamug totally fits that description. It’s a solid story based on a ridiculous premise, and something about that appeals to me. Give it a try. Take a chance. I have no idea where the series might go from here, but if they can keep up this level of the abnormal and the absurd (crap, did it again…), the trip will be worth the gamble. 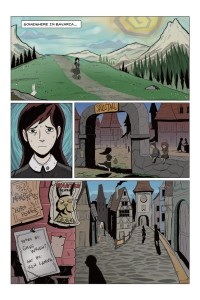 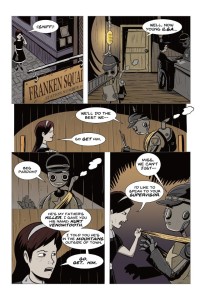 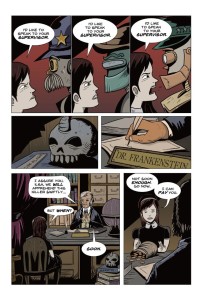