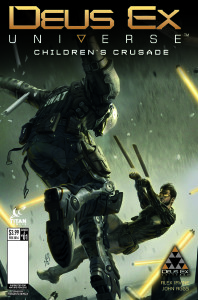 With society still reeling from the Aug Incident – the Illuminati orchestrated event which caused augmented individuals to mindlessly attack their ‘natural’ counterparts – anti-aug sentiment is at an all-time global high. Task Force 29 – an Interpol-funded coalition, created to quash the rising tide of terrorist activity – stands as the world’s main defence against total anarchy.

In the city of Prague, where tension is especially high, the team’s latest recruit, Adam Jensen, readies for his first mission with the unit. But being augmented himself, how will the former SWAT officer handle himself when faced with the grim reality of the mechanical apartheid?

Welcome to the darker side of Deus Ex in this thrilling prologue to the upcoming new instalment, Deus Ex: Mankind Divided (check out the trailer!.
———-

I’ll be the first to say that anytime a publisher attempts to put out a video game tie in title, history is not on their side. That said, recently there have been a slew of titles coming out that are doing their damnedest to break that trend. After reading the first issue of Deus Ex: Children’s Crusade from Titan comics, this could very well be one of those shining lights.

Children’s Crusade is a prelude to an up and coming video game entry in the Dues Ex franchise. Not being the hardcore gamer that some of our readers might be, I can’t really speak to the games themselves, but their concept is very cool. With a cyberpunk flare and over the top action with intrigue and plot twists to spare, the games are by all accounts top of the heap. This entry in the story picks up protagonist Adam Jensen after he’s joined up with INTERPOL Taskforce 29. Being the “new guy”, he has yet to be accepted by his new teammates. His rookie status is compounded by his own cybernetic augmentations.

The series looks to be taking the path of good storytelling through well done action. After reading it through, it really was the action sequences that stuck with me, and hammered home the dialogue and plot twists. Deus Ex is extremely well drawn by John Aggs, with a color nod to Mat Lopes, and if there was no dialogue at all it still would have been an entertaining book. However, writer Alex Irvine doesn’t let the book ride solely on the backs of the artists. Irvine gives us a protagonist with divided motivations. Adam Jensen wants to show his fellow Taskforce 29 members, and the world, that cybernetic enhancements don’t create monsters, while at the same time feeling empathy for the cause of the Augs. Again, Alex Irvine doesn’t stop there. He presents a world of suspicion and bigotry that has nothing at all to do with race or creed.

After the “Aug Incident”, the world looks at anyone with cybernetic augmentations of any kind as the enemy. A girl, born blind and given cybernetic eyes that allow her to see? Obviously she’s an evil cyborg bent on world domination. It’s this backdrop that gives Deus Ex the extra punch, that pushes it well past the average video game tie in. Not content to just rehash video game levels, Titan and the creative team behind Children’s Crusade are looking to break the mold, take the pieces of that mold to grind into powder, and make a whole new mold to stand proud and tall above the rest.

Given that video games have evolved into a visual story-telling medium unto themselves, the fact that comic books have been slow to build on that genesis is a little shocking. Thankfully, Adam Jensen and Deus Ex look to be on the path to redemption. 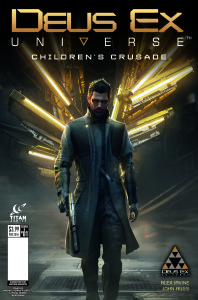 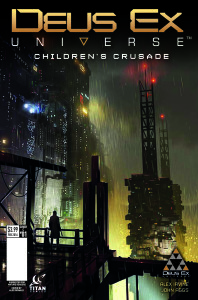 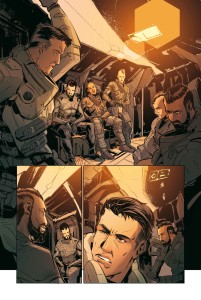 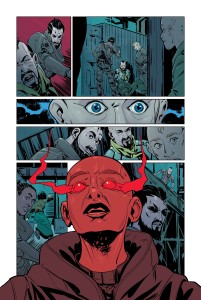 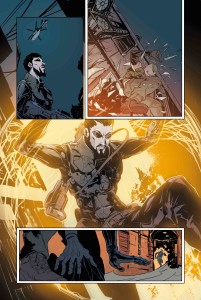