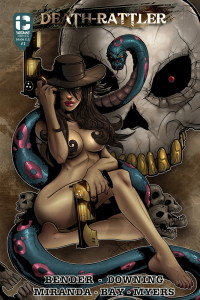 “It was an age of magic and science, iron and steel. It was a new Frontier but old ways die hard. The Devil’s Cross Gang ruled this land and the law was helpless to stop them. But there was a new threat coming for the Devil’s Cross Gang. An orphaned daughter of a murdered plains man, and her name was…

Out on the plains of Odessa, Texas, a man raised his children. He hadn’t always been a farmer, but after ten years he thought there was a chance that he’d left his past behind. Tragically, his past was never as far away as he’d hoped. Tracked by the gang he used to be a part of, the farmer and father of two could do nothing but send his children away before the Devil’s Cross Gang’s exacted their price for desertion. Now orphaned, Zach and his sister Dawson are left to grow up on their own.

Fast forward ten years, to Amarillo, Texas. Dawson is all grown up, and taking her revenge on the Devil’s Cross Gang, one member at a time. What follows is a fast moving revenge tale, set in a world that combines the Old West with science fiction. Bender’s writing is very tongue-firmly-in-cheek, with smoothly written dialogue and only a few groan worthy puns to be had. The art by Downing brought to mind the work of Humberto Ramos, with some very slick looking sci-fi characters to go along with the “pretty pictures”. The book was an easy, entertaining read with no huge twists and turns. Just a straight forward action story, the kind of which will easily find an audience.

I will say that most of this audience isn’t likely to be female, or of the easily offended variety. Death-Rattler has some good stuff going for it, with a style that’s going to appeal more to the direct to video, B-movie kind of reader. Of the titles from Insane Comics that I’ve read so far (Check out reviews for Bust and Hollow Girl for my take on some of their other books), this one is the most straight forward… one look at the cover, and you’ve got a pretty good idea of what’s going on inside.

If you’re a reader looking for some shoot ‘em up action, by all means give Death-Rattler a try. If future issues can bring in a little more depth to the characters, aside from their decidedly cool design, and some substance to the story, this title could stand out in a crowd full of scantily clad revenge seeking heroines. 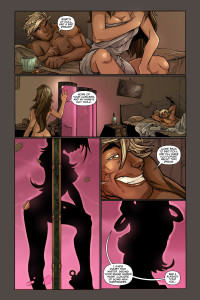 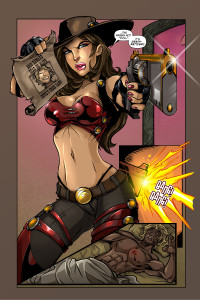