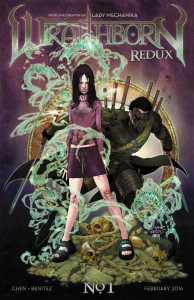 Demons walk among us, fettered and unseen, but ever struggling to gain a foothold into the material world. A secret brotherhood of warriors guards an arcane power, the Wraithborn, the sole weapon which keeps the creatures at bay.

Valin is the young warrior trained from birth to inherit and safeguard the Wraithborn. But by chance- or possibly treachery- the power is bestowed instead upon Melanie, a shy high school girl with no knowledge of the supernatural.

Together, the timid untrained teen and the proud but powerless warrior must find a way to wield the Wraithborn and save humanity from enslavement by the demonkind.

Wraithborn Redux is a special revised edition of the original Wraithborn series published by DC Comics, with new and edited scenes by the series’ creators, Marcia Chen (writer) and Joe Benitez (artist).
———-

Demons suck. That’s about all I can really think to say about them. I’ve read enough books, watched enough television to pick up that much. So you’d think it would be pretty cool to be able to turn the tables on the body hopping, people possessing parasites and kick ‘em in the teeth. Maybe if you were a member of the ancient brotherhood tasked with said kicking, trained from birth to combat evil and use the power of the Wraithborn, it would be.

Melanie isn’t. She’s just about as unassuming a high school girl as you could think of, going to incredible lengths to avoid drawing attention of any kind to herself. This is highlighted in one particularly painful scene wherein Melanie ignores the pleas of another girl being mercilessly picked on by a pack of “mean girls”. While she could have easily, and mostly non-confrontationally, stepped forward to help the poor girl, Melanie steps around her, mentally agonizing over the decision the whole time. In her state of mind, as much as she’d like to help, someone stronger, someone nicer, someone better than her will come along and take care of it. Melanie believes that taking any kind of action firsthand would just shift the pack of harpies’ target from one victim to another.

If it sounds a little bit like Spiderman’s origin story, the scene were Peter Parker sidesteps the fleeing felon instead of assisting in his apprehension, only to find out that this man would later go on to murder his uncle Ben, don’t worry. Melanie is much more aware of, and disgusted by, her own cowardice, whereas Peter just didn’t think it was his problem. That distinction goes a long way toward solidifying Melanie’s status as a compelling character.

To get back on track, Wraithborn is an urban fantasy story, full of magic and demons. While I haven’t really touched on those aspects, I can assure you that they are present throughout this first issue. I think that setting Melanie up as a three dimensional and relatable character is done well enough to deserve some extra attention, and most of what I’ve touched on so far takes up most of the middle of the book.

Also featured is Valin, a young warrior destined to carry the burden and power of the Wraithborn, to use that power against the forces of evil constantly encroaching on the world. But at the point of the ceremony where Valin would take possession of the power, his predecessor is nowhere to be found. When we catch up with him, he’s locked in battle with a demon, and trying to come to grips with the realization that his brotherhood has been betrayed from within. Wounded in the fight, this warrior seeks out someone, anyone, so that he can pass on the power of the Wraithborn. Of course, he stumbles upon Melanie. With no other options, he chases the frightened girl, wrestles her to the ground, and with an apology and instructions to “Find Valin, he can help you,” a new bearer of the Wraithborn is found.

Now none of this is really a spoiler. From the beginning of the issue, we’re shown Melanie in all her demon fighting glory, and she’s actually the narrator of it all, relating the events leading up to her status as defender of humanity. The origin itself is almost secondary to the meat of the book, which is the establishment of Melanie as one of the last people on earth who could ever be seen as a fearless warrior… least of all in her own eyes. It’s that character building that I thought was done very well by both Chen and Benitez. Marcia Chen gives Melanie the voice of an essentially good person, who simply lacks confidence and conviction. Benitez has created Melanie as a small and unassuming girl, who sees the kind of people she’d give anything to be, but can’t seem to pull it off.

Fans of the genre that includes the likes of Witchblade will want to give Wraithborn Redux a look. I thought the characters were extremely well put together, with no real throwaways to be found, and the artwork was absolutely top notch. Anyone who enjoys the urban fantasy style of storytelling should think this one is well worth their time. 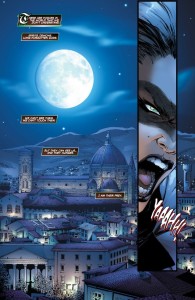 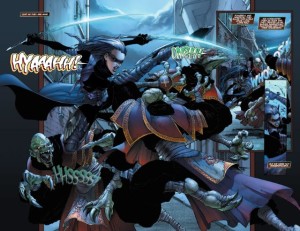 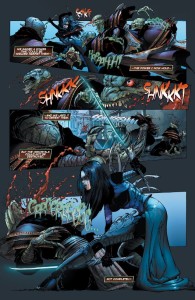