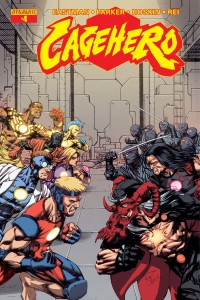 Schoolkid Ryder Stone is now Legend, one of an elite super team known as the Cage Heroes. But with his family kidnapped by a sinister super army, can Ryder unlock the hero from within in time to save the world? The furious final chapter of Cage Hero, as imagined by Kevin Eastman (co-creator of Teenage Mutant Ninja Turtles), Ian Parker (MMA expert and former UFC Manager), and Mark Mastrandrea (MMA personality)!
———-

Max Burnzz. I.M. Pounder. Lady Phaze. Maximus. Doc Proton. Legend… Together, these are the Cage Heroes, each a master in their respective disciplines of karate, kick boxing, Brazilian Jiujutsu, Western boxing, and wrestling. When their disciplines are combined into a mixture of martial arts, and powered by their mystical medallions, they find the heroes within and take on the evil (pronounced Eeee*vyl)forces of Dark Sanctum. First, they must rescue Legend’s (aka: Ryder Stone) father and grandfather, the former a Captain in the armed forces, and the latter a retired medallion powered hero.

Okay, it all sounds like something you’d find in a really cheesy comic book, or maybe something Roger Corman would come up with on an off day. But honestly, if either of those points is a face value deal breaker for you, why are we even here? A lot of what we see, read, and accept in comic books is at the very least based in the most cheesetastic of premises. Have you read any of the Golden Age comics? Yikes. And yet, we love them for what they were, and for what they’ve grown into.

What we have in Cage Hero is a shining example of how corny but often clever dialogue (seriously… woof) can be combined with a very basic plot device (Mixed Martial Arts), and wrapped up with some pretty sharply drawn characters and action sequences, to present some entertaining escapism. To be honest, and you might already be aware of this if you read my reviews and/or follow me on Twitter (@cagekicker69, if you’re interested and can forgive a little shameless self-promoting), I am a fan of both comic books and MMA. With that in mind, this series is sort of a no-brainer for me. And in case you missed it, that is in fact Kevin Eastman on the creative team… the same Kevin Eastman who had a hand bringing us a certain group of adolescent heroes in a half-shell. That’s gotta be worth something.

Without a doubt, this book isn’t without its faults. I’ve already mentioned a few of them, and could go on to name a few more, but it’s nothing that would automatically prompt me to give it a pass. Despite its shortcomings… hell, maybe even because of them if we can refer back to the aforementioned Roger Corman and his relative success… Cage Hero brings it all together and becomes something greater than the sum of its parts.

Parents, if you have any kids who are interested in martial arts and super heroes, this is a prime opportunity for some shared reading time with no real concerns for excess violence or overly sexualized characters. Readers in general, if you’re able to set aside your idealized views on literature and the finer points of mature storytelling, this is a book that can give you some of that easy reading escapism most of us desperately need now and then.

Pick it up and give it a look… Worst case scenario, you’ve only lost about ten or fifteen minutes out of your day, and maybe the price of a Grande cup of Starbucks Coffee.