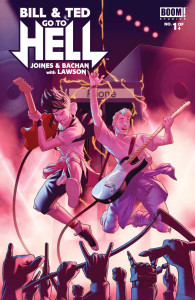 Bill & Ted are back for a brand-new miniseries, this time with the Imagine Agents team of Brian Joines and Bachan at the helm. It’s time to get the band back together! Bill & Ted and the Princesses will have to reunite with some historic friends to knock down the Devil’s door and get their friend Death back. With the help of Rufus, Billy the Kid, Joan of Arc, and more, this is the showdown that will rock the supernatural world. History vs. Hell. Too bad Hell has some surprises up its sleeve…
———-

Things are looking great for the Wyld Stallynz… Still most excellently married to their bodacious British babes, the fellas have settled into their new roles as fathers to little Bill & Ted. So when their band practice is interrupted by a bogus attack from a demon possessed Colonel Oats, they’re totally surprised. What’s more, they find out that the Grim Reaper dude has been “Deathnapped”, and it will take the combined efforts of Bill, Ted, Joan of Arc, Abraham Lincoln, Billy the Kid, and their old pal Rufus to rescue him.

If this whole thing sounds like the most ridiculously convoluted and outrageous excuse for a storyline you’ve ever heard of, you haven’t actually seen either of the Bill and Ted movies. Sooo… go do that. Right now.

Okay, now I want you to go back and read that first paragraph again… Makes more sense, doesn’t it?

It’s kind of amazing to me that Bill and Ted are still rocking the righteous tunes, and having the most excellent adventures. We’re talking about a pair of movies that predate Keanu Reeves’s Matrix run, the first (Bill and Ted’s Excellent Adventure) coming out in 1989. Hell, that’s before his stand out performance in the movie Parenthood. No one knew who that Keanu kid was… and don’t even get me started on Alex Winter (he played Bill). I’m pretty sure no one was more surprised than everyone involved in making the movies when they turned out to be hits, and solidified their status as “Pop Culture” icons.

And here we are, 27 years later (crap, I’m old) and the lads are still going strong. I would like go on the record as saying that this issue does a great job of capturing the tone, look, and attitude of the movies. The dialogue is quick, and my head easily rolled with it to fill in the voices of all the returning characters, right down to Bill and Ted’s air guitar riffs. 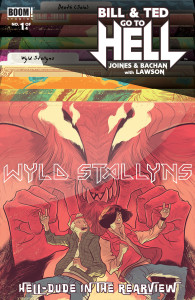 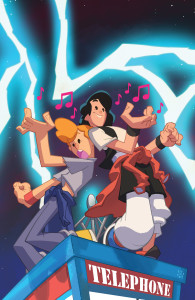 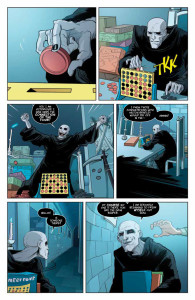 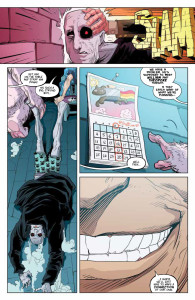 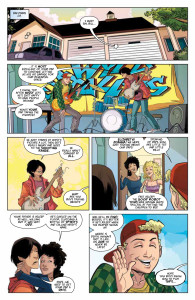 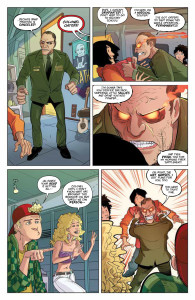 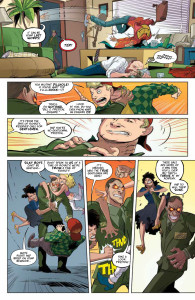