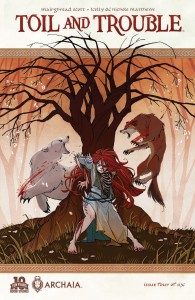 Toil and Trouble, better known as Macbeth through the eyes of the Three Witches, rolls along with more in-fighting and interference than you could ever think possible. Previous issues showed the witch Smertae’s displeasure at having to trip up Macbeth and her disdain for Riata’s joining a Norwegian army to push the prophesy forward. We open to her contemplation of the Norwegian reinforcements that she just sank, and to her place in the destruction of Macbeth’s family. Riata had just claimed Lady Macbeth as her own creature , and will not let Smertae waylay her again.

Very interesting to see Macbeth as not a political tragedy, but as a war between the Fates protecting Scotland. While seeming to work together, Riata and Smertae fight each other at every turn, with Cait simply trying to remind them of their duty to Scotland. Mairghread Scott writes with a Shakespearean accent but does not get bogged down in it, weaving in the bits of Macbeth we know along with the struggle of the conflicting Fates to put Scotland on the right path.

The art by Kelly and Nichole Matthews on this entire series has been beautiful, with careful spotlighting of just where the Fates are pushing – a hardened heart here, a wasted muscle there, a broken tool or bridle – so that you know which parts of the story are controlled by humanity and which parts by fate. The vivid colors paint clearly which scenes are without influence and which are being manipulated; also the past shown in a limited color scheme to highlight a break from the main story. The collection of this story, when complete, will be a find addition to anyone’s library.

We all know how this story ends, but the journey on Scott’s path has been well worth the experience. Let’s see how the Fates allow this to progress. 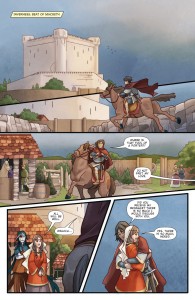 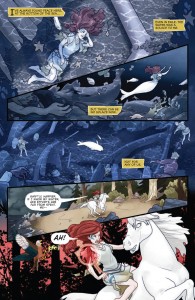 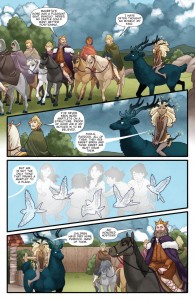 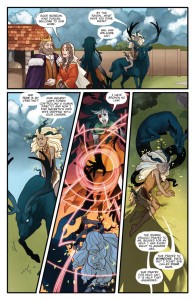 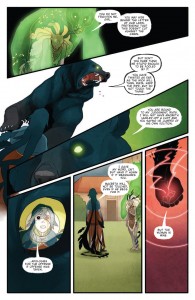