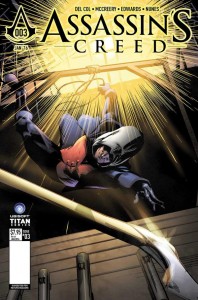 Desperate to escape from the horrors of Salem, Tom must place his trust in the hands of a stranger, and go against every instinct he has as an assassin, and man, to save the terrified travelers relying on him. For Charlotte, time’s running out as the Templar threat moves closer…
———-

Life in Salem, Massachusetts during the time of the witch trials was no picnic. If you were a young girl experiencing blackouts and bouts of prophecy, things could go much, much worse. So it goes for young Dorothy, but in her favor is the presence of one Goodman Tom Stoddard. As assassin for the Brotherhood, he’s dedicated to the mission before anything else, and right now his mission is to keep Dorothy safe from the Templars who hunt her. Helping him is Goody Jennifer Querry, a nurse determined not only to save Dorothy, but also a young mute boy named David. Jennifer’s altruism is opposed by Tom’s dogged determination to accomplish his mission at all costs, to risk a handful of lives if it could save countless more.

Also present, but invisible to all but Dorothy during her blackouts, is Charlotte. In the present day, Charlotte is using a machine called the Animus to “ride along” through her genetic memory and experience firsthand the actions of her ancestor Tom Stoddard. She’s been recruited by a modern cell of Brotherhood assassins as they try to root out a traitor.

This story has more twists and turns than the Audubon… The action is occasionally muddled, not always easily followed from one panel to the next with some character designs just close enough to others to make it tough to follow. For all of that, the design sill does a good job of showing the action as it happens, and as anyone who’s played any of the Assassin’s Creed games will tell you, dynamic action is the key trait to watch.

A greater hitch is in the complexity of the plot… We have multiple timelines, several characters, and a handful of potential betrayals and double deals. The information comes quick, and with so many people involved it wasn’t easy to follow who was talking to and/or about whom. This might have been more easily read in one sitting as a collected edition, but by single issues coming out monthly it became easy to lose track of what was happening.

Overall, fans of the Assassin’s Creed video game series should find a lot to latch onto here, and the setting being placed in Salem at the time the witch trials makes for a cool backdrop. Take a Leap of Faith… just be ready to take some notes as you go, for reference later.