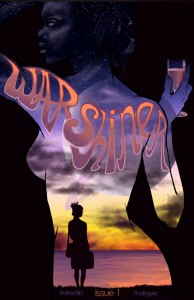 Warshiner #1
Creator and Writer: Rebecca Rothschild
Artist: Kate Rodriguez
Dr. Evelyn Ambrose is a botanist on the run from Earth who is about to be offered a very interesting business proposition. In a time when the universe’s largest empire has banned all alcohol, Evelyn finds herself producing alcohol on a foreign planet with the intent to distribute in dry space. Luckily she is not alone, she lives with a cast of colorful, capable and dangerous characters that guide her through this intergalactic tale of prohibition.
———-

Welcome to Idori, by all appearances a tropical paradise worthy of the name. Evelyn Ambrose is immediately taken with its charms, but can’t help but crave a little taste of home… that home being Earth, and that taste being such a simple thing as a pint of ale. Evelyn’s first stop is a local bar, where it becomes obvious just how far from home she really is. It seems the local home brew leaves a bit to be desired. While Earth-made alcohol is in high demand throughout the mostly “dry” galaxy, the cost is more than most proprietors can afford. So what’s a thirsty botanist to do? Obviously, she meets up with some shady people, some not-quite-so shady, and the last surviving member of a royal line, all seemingly interested in the lucrative possibilities of Earth quality libations being made available at home brewed prices. All in the spirit of Breaking Bad.

The pace in the first issue is slower than some readers might appreciate, but given what Rothschild and Rodriguez are building that’s to be expected. There is no intergalactic threat, no villainous organization bent on world domination. This is a story about a woman abroad, on the run (from what, we don’t know just yet) and trying to make a place for herself. Coincidentally, now that I’ve typed that last bit out, I can see that there could very easily be a parallel between Evelyn Ambrose and the creative team of Rothschild and Rodriquez themselves. Warshiner is a self-published book, obviously looking to word of mouth to get a wider distribution. It’s looking to find a place among the bigger, bolder, flashier, and just plain louder books out there. There’s a lot to set up in this series, and I’d like to see it keep going.

So here we are… on the raggedy edge. There might not be any “thrilling heroics”, or “big damn heroes”, but there’s still an attitude about this book that I kinda like. And dammit, it made me thirsty. Gonna go grab a beer. Can I grab you one while I’m up 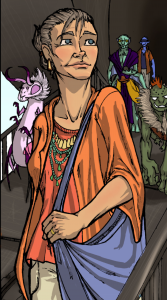 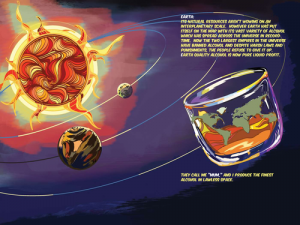