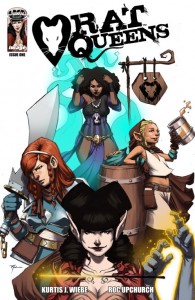 Rat Queens volume 1
Written By: Kurtis J Wiebe
Art By: Roc Upchurch
Who are the Rat Queens? A pack of booze-guzzling, death-dealing battle maidens-for-hire, and they’re in the business of killing all god’s creatures for profit. It’s also a darkly comedic sass and sorcery series starring Hannah the Rockabilly Elven Mage, Violet the Hipster Dwarven Fighter, Dee the Atheist Human Cleric, and Betty the Hippy Smidgen Thief. This modern spin on an old school genre is a violent monster-killing epic that is like Buffy meets Tank Girl in a Lord of the Rings world on crack!
Image Comics
———-

Hey, total surprise, Paul’s playing catch up again! I just finished binge reading the first five issue story arc of Rat Queens, and I can honestly say that it’s been a while since I’ve laughed out loud so often while reading a comic book. This series is pure entertainment, well written and incredibly well drawn, with action and comedic beats aplenty. Anyone who’s ever spent any time at all trying to calculate a THAC0 (no, not gonna explain it to you… look it up), or debated the legitimacy of where cleric spells come from, is going to get a huge laugh out of this series. It’s everything that’s fun about the fantasy genre, without the heavy-handed melodrama and brooding heroes.

Hannah, Violet, Dee, and Betty are serious about their adventuring, and they truly do epitomize the adage “If you’re good at something, never do it for free.” Unfortunately for the city of Palisades, what they’re really good at is mischief and mayhem. Unfortunately for the Rat Queens, someone in the city has taken it upon themselves to rid Palisades of their presence, along with every other adventuring (read: “mercenary”) band. In a series of unfortunate events, the various groups making Palisades their home have been sent out on missions to rid the land of evil. What they don’t know is that these missions have been staged with the sole purpose of sending them out to be killed horribly.

Through the course of this story arc, we’re given a great look into the life of a gamer (yes, since you ask, I have been known to roll the dice on occasion). The dialogue isn’t full of “thee’s” and “thou’s”, handily replaced by a healthy use of “For Unlawful Carnal Knowledge” bombs. Pretty much the kind of talk you’d hear sitting around a gaming table with a group of friends hopped up on carbohydrates. In fact, the entire series looks to be a loving ode to old school tabletop roleplaying, with every “PC character class” very well represented… plus a twist (my personal favorites being Dee the atheist cleric and Violet the female dwarf who shaves her beard in a show of non-conformance…).

It’s ultra-violent, and every expletive you can think of is proudly utilized. If you’re the sensitive type, you’re gonna want to give this one a pass. If you’re the “other” type, and you’re looking for some sharply rendered chaos, follow the exploits of these ill-tempered, hard-drinking, sexually promiscuous ladies. They’re almost never boring… I’ll be continuing on with this series, without a doubt. 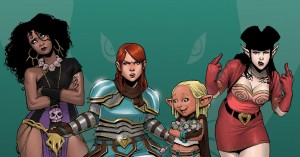 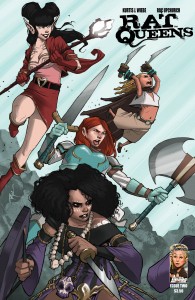 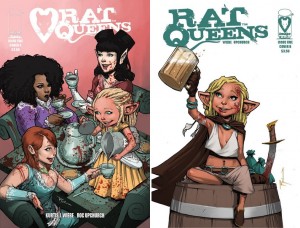