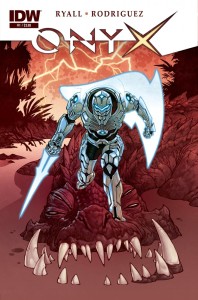 Onyx #1 (IDW Publishing)
Storytellers/ Creators: Chris Ryall (words) & Gabriel Rodriguez (art)
From deepest space comes the cyborg warrior Onyx… but has she come to Earth in its time of dire need to save it or to end it? A star-born knight for a new generation takes flight here!

The story of an overpopulated planet, low on resources and space, begins with two meteors crashing to earth in a rare and protected patch of jungle. Concerned for the endangered resources, the International Global Defense Force sends in two teams to investigate the crash site, and to protect their interests. Contact with the first team in is lost almost immediately, leaving the members of the second team clueless as to what they’re getting into.

As they approach the site, their craft is attacked by wildlife that would make Dr. Moreau proud. The action starts as the survivors of Team Avin scramble to get their bearings and fight for their lives. Things aren’t looking good, when an armored figure out of Arthurian legend steps in to save the day… Or kill them all.

The armored figure is Onyx, the last survivor of race that was wiped out by “The Spore”, an intergalactic parasite that moves from planet to planet. It finds a place to nest, infects everything that lives, and recreates everything in its image. The spaceknight, Onyx, has one mission… to stop the Spore by any means possible. Any means. If that includes wiping out all life on Earth, a quick end is a mercy that Onyx’s people didn’t have. Sounds pretty ominous, huh?

So there are a lot of very cool things going on here. In the afterward written by Chris Ryall, there are numerous elements and inspirations that went into the creation of Onyx. The one most prominently mentioned is ROM, Spaceknight. As a kid, I did read some of that Marvel series, but not really enough to draw more than the obvious broad comparison… Onyx is a knight who came from space. In some of the other inspirations mentioned by Ryall- Aliens, Ghost in the Shell, Judge Dredd- I see many more of the connections, and they’re very well placed. The more I looked at the book, going back re-reading bits here and there, the more I got the “aha!” moments that are laced throughout the story. In a second reading, it became pretty obvious that this story is a labor of love on the parts of its creators.

To be sure, there are bits that took me out of the action… mainly dialogue that felt a little clunky and heavy on the exposition… but overall I enjoyed the read. The action itself is very well drawn and laid out, always a bonus in an action heavy comic, and not always easy to achieve. I don’t know if there’s going to be a long run on the series, as Ryall mentions an initial four issue arc, but I’d like to see this comic grow and get some legs under it. 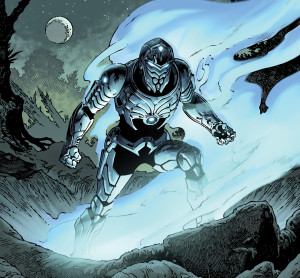