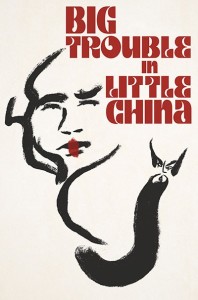 Big Trouble in Little China #13 (BOOM! Studios)
The new creative team of writer Fred Van Lente (Archer & Armstrong), artist Joe Eisma (Morning Glories), and Mondo cover artist Jay Shaw (Evil Empire) brings Jack Burton into 2015! Jack is a man out of time. His friends and the world around him have changed. He’s now on a hunt for the Pork-Chop Express, and the eccentric ’80s-obsessed billionaire who has it!
———-

It’s been a while since I hopped aboard the Porkchop Express, and it looks like a LOT has happened to good ole Jack Burton (Who?) while I was away… He was put into a magically induced state of suspended animation since the mid 80’s, and recently woke up. Okay, so I guess not really all that much happened. Moving on.

The “man out of time” thing has been done many times, both well and not-so-well. Part of the problem could very well come down to picking the right character for the job. I have to say that Jack Burton could very well be the perfect foil for missed pop culture references and jokes. Let’s face it, he wasn’t always all that on the ball back in the eighties, so fast forward him a couple decades and watch the magic happen.

Starting out the issue, there’s a little bit of a bounce… sort of a preview of things to come, followed by a jump back to see how we got there. I could’ve used the helpful “Then” and “Now” captions, but I’m not always the most up to speed person so that could’ve just been me. Once I figured it out, things moved along nicely. Jack hops a bus to check in on his old pal, Wang, who is still running his restaurant with the help of his daughter Winona Chi. Wang, with a little less on top and a little more in the middle, is happy to see his buddy, and immediately starts contemplating new adventures. Jack’s a little less interested in a life of adventure, and more inclined to pick up his Pork Chop Express, which had been entrusted to Wang during Jack’s hiatus. Unfortunately, Wang had some tough times, and thirty years is an awful long time to hang onto a semi. Jack is horrified to learn that the Express was sold to pay the bills.

Like I said, the beauty of this story comes in the writing. That isn’t to say that the art isn’t good. To be truthful, the art in the original story arc is part of what put me off the series. The current style is a little less stylized, and a little more palatable for me. But in the writing we get to see Jack shine as he gets his first looks at the new world around him. The jokes include confusion over what someone would be doing “in a book of faces”, and what really happened to the Berlin Wall… no, Jack, Reagan didn’t bomb it. The best nod is when we find out that reporter Margot Litzenberger (played by actress Kate Burton… no relation) wrote a book about her adventures in Little China, and titled it… take a guess… “Big Trouble in Little China”. Hey, they even made a movie about it, and Jack is happy to see that they got Snake Plissken to star as him!

With juvenile humor and dated jokes aplenty, this arc looks to be taking a new direction for the series. That could be a very good thing… The original arc wasn’t bad, but speaking as a big fan of the movie, it just didn’t hold my attention. I’m looking forward to seeing Jack’s further adventures in the 21st century. Hopefully, he isn’t stuck taking the bus the whole time. 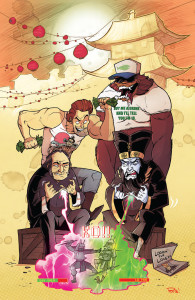 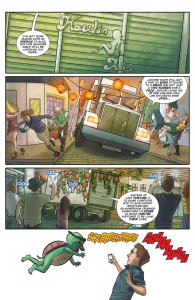 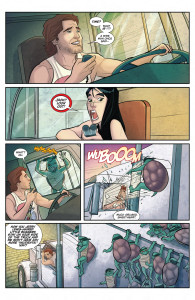 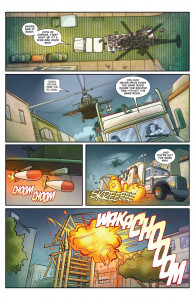 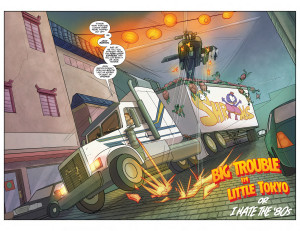